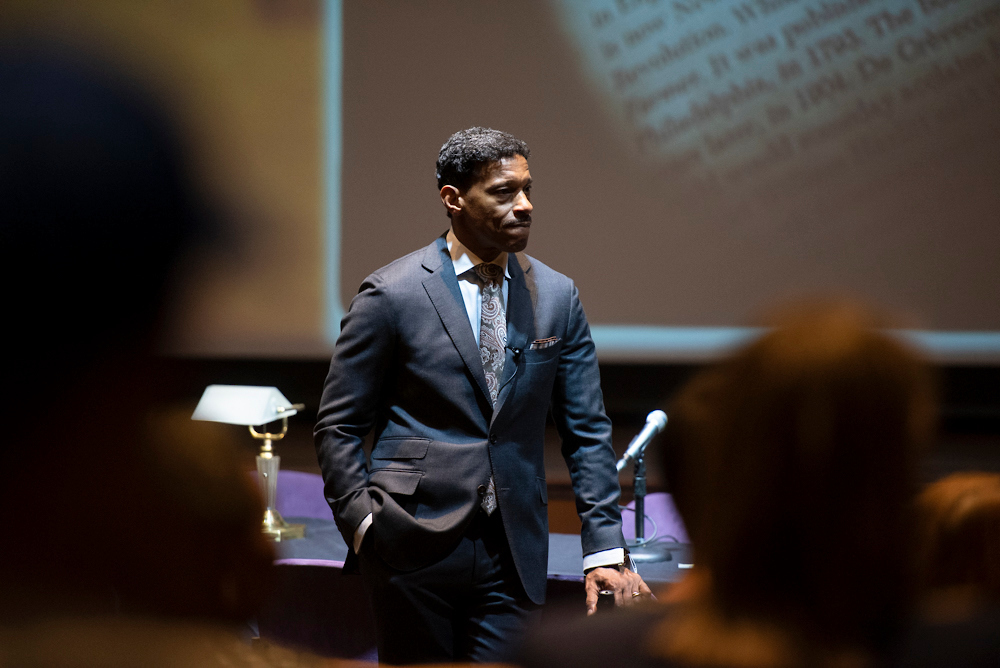 Hannah Ruhoff/Ohio University Kyle Bowser, BSC ’80, listens to audience members during Trial by Jury: A Case of Deportation as part of the Challenging Dialogues lecture series on September 12, 2019.

Ohio University alumnus Kyle Bowser, BSC ’80, has recently been named as Senior Vice President of the Hollywood Bureau for The National Association for the Advancement of Colored People (NAACP).

In his new role, Bowser will promote diversity, inclusion and equity by lobbying the entertainment industry and by building a bridge between the artistic communities and the institutions that monetize their talent.

“It is my job to try to make sure there is a focus on diversity, inclusion and equity in that commerce,” Bowser, who earned his OHIO degree in radio/television and film communications, said. “[This role] is the perfect nexus between all the entertainment-related work I’ve been doing throughout my career and all of the personal passions that I have about fairness.”

Before this appointment, Bowser spent the previous year working as a consultant for the NAACP. His impressive career spans 30 years as a television and film executive and producer, where he applied his talents to NBC Business Affairs, developed creative programs for Fox Broadcasting Company, and served as director of creative affairs for HBO Independent Productions.

While some aspects of the entertainment industry are inclusive, Bowser notes that other entities have not yet fully embraced the ideals of diversity and equity. His goal is to change that, because not only would that inclusion be felt in Hollywood, but also across the world.

“I would like the world to have a greater appreciation for the African American experience, and I think television and film are the most impactful way to make an authentic impression,” he said. “Images travel the globe and they inform people, create perceptions, and shape hearts and minds. The more those images are multidimensional and accurate, the better the world will understand who we truly are as a people.”

Bowser’s history of activism goes back to when he was an undergraduate student on OHIO’s campus. Although certain tactics and slogans were different, the message has always been the same at the core: Speak up for what is right.

“We did not call it ‘diversity, equity, and inclusion’ at the time. We just thought ‘You know, this isn't right,’ and we need to speak out. The advocacy work we were doing as young students was guided mostly by our conscience,” Bowser said. “I’ve now embarked on a new direction, which in many ways doesn’t feel new, but feels like putting on an old pair of shoes.”

Bowser encourages OHIO students to get involved and to continually look at ways to engage and pursue any interest they may have, whether it is by taking classes, finding a club or joining a student organization.

“You never know which experiences will ultimately propel you to a new plateau in your life. There were experiences that I had as a student at Ohio University that at the time seemed like a good use of my time or something of interest, but I didn’t realize just how necessary that experience would ultimately prove to be later in life,” he said. “Just be as diverse as you can in your experiences and the people you engage, because when you get out of school, that is how you should want to live your life.”

Bowser’s connection with OHIO runs deep. He is a part of the Scripps Dean’s Advisory Council, has taken part in the Alvin Adams Symposium, and hosted a Challenging Dialogues lecture event in 2019. He also helped establish the Scripps College OHIO-in-LA program, which allows students to experience working in Hollywood’s media and creative industries.

One year while taking a trip to Athens for a Scripps Dean’s Advisory Council meeting, Bowser invited his eldest son Evan to come along to visit OHIO’s campus. The son had previously toured 30 colleges across the United States but was still undecided. Like his father, Evan fell in love with the campus and decided to enroll in OHIO, majoring in urban planning and sustainability, and graduated in 2019.

OHIO pride follows Bowser wherever he goes, and he hopes other alumni will connect and give time back to the OHIO community.

“I encourage alumni to come back and give back, to sustain this tradition we inherited as students and we should want to pass on to students in the future,” Bowser said. “We should provide the kind of resources to the University that would allow as many people as possible to have that special OHIO experience.”

A native of Philadelphia, Pennsylvania, Bowser resides in Los Angeles with his wife, Yvette Lee Bowser, creator and/or executive producer of hit shows “Dear White People,” “Black-ish,” “Half & Half,” “For Your Love,” and “Living Single.” They have two sons, Evan and Drew.

Bowser received his Juris Doctor degree from Widener University School of Law, and is a member of the Pennsylvania and New Jersey bar associations. He also serves on the board of directors for the NFL’s Fritz Pollard Alliance, and supports the Black Entertainment and Sports Lawyer Association and the National Association of Multi-Ethnicity in Communications, founding its annual Vision Awards and recognized with its coveted Legacy Award.

For more information about the NCAAP Hollywood Bureau, click here.