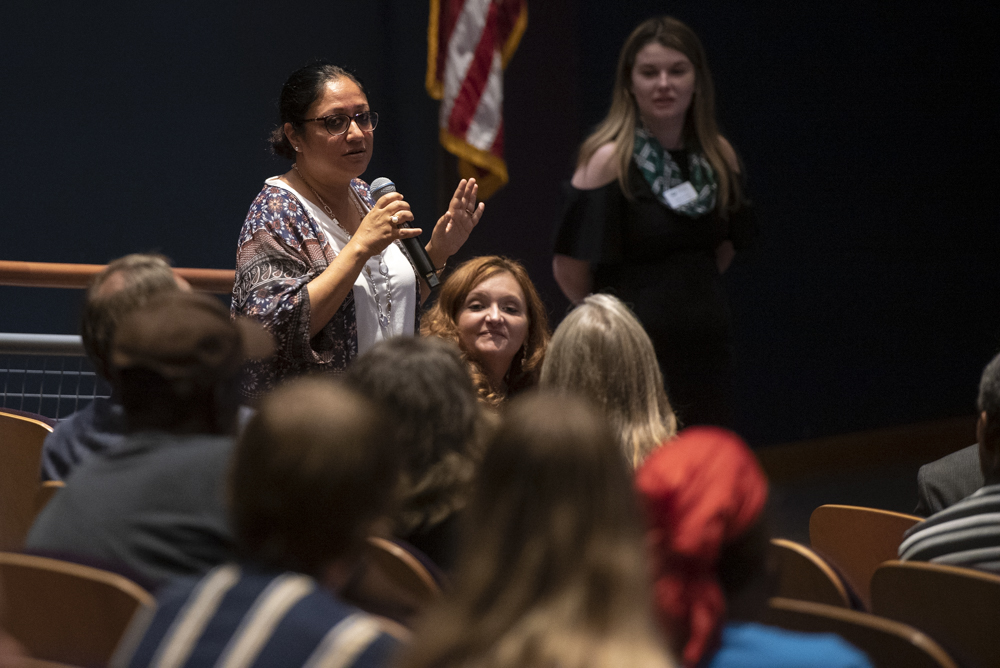 “Bring me your tired, your poor, your huddled masses yearning to breathe free.”

These words on the Statue of Liberty seem to invite people from foreign lands to come to the United States.

Bowser, an Ohio University alumnus and entertainment industry executive, delivered the University’s third Challenging Dialogues lecture on Sept. 12 to a crowd in Baker University Center Theatre. The group was gathered to engage in meaningful dialogue and debate regarding immigration policy and its relationship to the elasticity of America’s founding principles.

At the event, Bowser screened a 30-minute film he produced that depicts a trial and jury deliberation. The dramatized case involved a young Deferred Action for Childhood Arrivals (DACA) recipient who was walking to a bus stop and was detained by police because of his tattoo that police believed was gang insignia. He was then turned over to U.S. Immigration and Customs Enforcement (ICE).

The film delves into racial profiling and whether or not the government should be able to pursue deportation of the young man if he is in the gang, which would go against DACA guidelines. The jury in the film goes back and forth on whether or not he was in the gang just because of the tattoo, and whether he should be deported or if he’s protected by the Constitution of the United States.

That question was then handed over to the crowd in Baker Theatre. While 12 people in the crowd were sent off to a separate room to deliberate as a jury for 15 minutes, the remainder of the group discussed the case.

Bowser asked the group — what even is an American? One participant said Americans are indigenous people and another said the concept of an American was established by Europeans who came to the United States.

Dr. Amy White, associate professor of philosophy at OHIO Zanesville, said she teaches students from a wide demographic who have varying opinions on issues such as immigration. While she identifies as left-of-center on the political spectrum, she said many of her students are conservative.

However, everyone, regardless of political ideology, is a “part of the same species” who simply have different opinions on a topic, according to Dr. White.

Throughout the rest of the event, Bowser went into what the Constitution of the United States says about citizens and their right to life, liberty and property on American soil.

When the 12 OHIO jury members came back into the room, they let Bowser know they decided there was not enough evidence to prove that the young man in the film was in a gang. Therefore, they believed he is still protected under DACA and should not be deported, ruling in favor of the plaintiff (the young man who brought the case against the government trying to deport him).

The crowd was then asked to vote with a red or green card in their programs. All but one person in the room voted with their green cards, in favor of the young man.

“Microphone, please,” Bowser said, gesturing to the man who held up the sole red card.

The man then justified his position, stating there are two separate discussions that need to take place — what should the law be and what is the law? He said most of the night’s discussion was surrounding what the law should be. He added the Constitution wouldn’t come into play in a regional court because it’s not the U.S. Supreme Court, noting he believes the man in question was a gang member and thus should have been deported.

President M. Duane Nellis said he was very pleased and impressed with the conversation during Bowser’s lecture.

“Kyle Bowser did a wonderful job of leading the presentation and discussion, and our audience of students, faculty, staff and alumni were very engaged in a thoughtful conversation,” President Nellis added. “I am already looking forward to future sessions of our Challenging Dialogues lecture series.”

A native of Philadelphia, Pennsylvania, Kyle Bowser received his Bachelor of Science degree from Ohio University in radio/television and film communications, and his Juris Doctor degree from Widener University School of Law.

He is a member of the Pennsylvania and New Jersey Bar Associations, the HollyRod Foundation, and the National Association of Multi-Ethnicity in Communications (NAMIC) – for which he founded the annual Vision Awards and received its coveted Legacy Award.

Bowser is married to Yvette Lee Bowser, the creator and Executive Producer of the hit sitcoms Half & Half (UPN); For Your Love (WB); and Living Single (Fox). The happy couple lives in Los Angeles with their sons, Evan and Drew.

The purpose of the “Challenging Dialogues” lecture series, which was identified as a strategic priority for OHIO by President M. Duane Nellis, is to provide outlets for constructive conversations regarding contemporary issues that spark national and/or international attention. The lecture series, and its topics, are being spearheaded by the Challenging Dialogues for Contemporary Issues Task Force, which was formed by President Nellis in April 2018.

The ongoing speaker series is anticipated to vary in style and format based on topics and presenters; formalized lectures, panel discussions or multiple “Ted Talk-style” presentations are possible.

President Nellis believes it is higher education’s responsibility to serve the greater good by expanding and improving humankind’s understanding of the world around us. He hopes this lecture series will help to bring clarity to a world too often clouded in confusion.