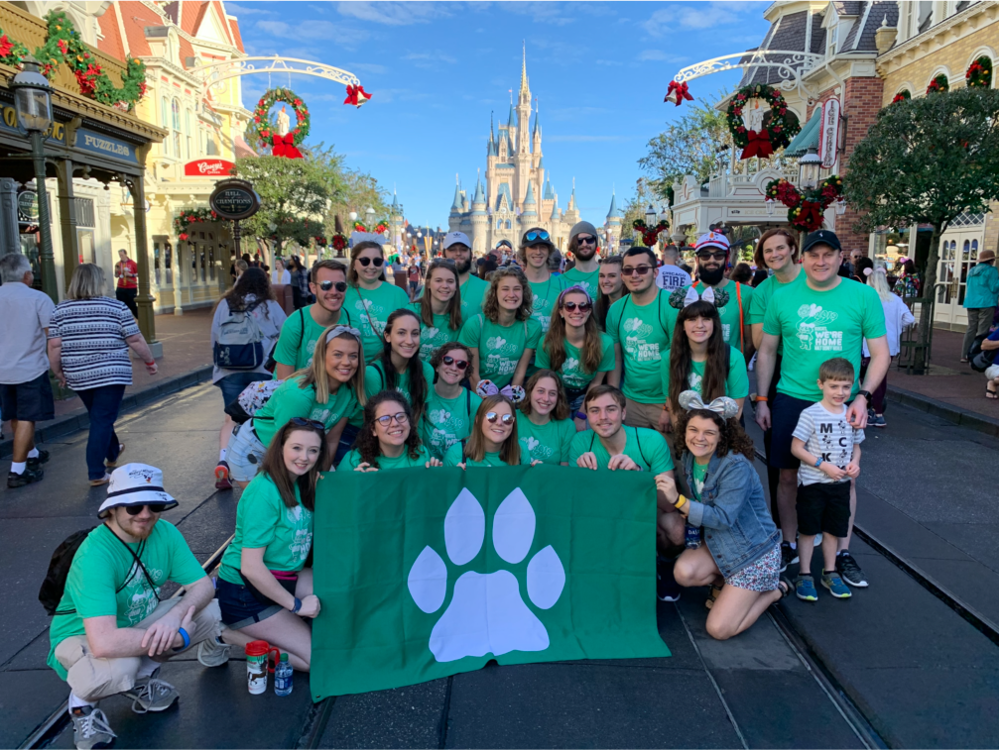 Students from the Storytelling and Theme Park's Fall 2019 class pose in front of Cinderella's Castle at the Magic Kingdom.

How does one get transported to the happiest place on earth when they already live in Athens? Through the Scripps College of Communication’s Storytelling and Theme Parks study away course, where students are immersed in the numerous ways theme parks like Walt Disney World and Universal Studios use media, marketing, technology, and innovation to bring imaginative stories to life.

The course, which began in Spring 2013 and is taught by Scripps College professors Beth Novak and John Bowditch, examines media design, technology and storytelling principles that are utilized in the development of theme parks. Students specifically learn how the integration of different forms of media are brought in to make a cohesive, immersive environment.

“I had the idea to begin this course after visiting Disney and talking with a student, whose family regularly visits Disney, on how well Disney theme parks tell a story,” Novak said. “We had this really fun, deep conversation on immersion and media and the way they are combined to create the best experience for guests and I thought this could be a great learning opportunity for students who find interest in this type of storytelling.”

Open to undergraduate seniors with at least 15 credit hours in communication studies, information and telecommunications systems, journalism, media arts and studies, or visual communication, the course is a semester long with classes being held on the Athens campus and concluding with an off-campus field experience in Orlando, where students will stay in a Walt Disney World Resort and visit all four Disney World Parks, as well as spend a day at Universal Studios.

Although the course mainly looks at the ways Walt Disney World immerses guests, Novak plans to transition the course to also focus on ways theme parks have managed the pandemic.

Unfortunately, due to COVID-19, the Storytelling and Theme Parks class was canceled for the Fall 2020 semester, however, after extensive work with the office of global opportunities, Novak and Bowditch have submitted a COVID plan allowing them to plan a trip for Fall 2021.

COVID-19’s impact on the class didn’t stop with last year’s cancellation. Walt Disney World itself has had to make major changes to its magic making in response to the pandemic.

“The pandemic has impacted not only the operations of the parks but the overall economy of the company,” Novak said. “Disney continues to transition into a bigger company, acquiring more corporations and producing more content, but that does not mean that they haven’t taken a hit financially either. Disneyland in California is still not open, nor are many of the resorts at Walt Disney World in Florida. On top of that, capacity is still low in Disney parks and many movies that were set to be released in theaters in the last year were released directly to streaming services, causing a major impact on the company.”

According to Novak, this year also begins Walt Disney World’s 50th anniversary celebration, an event that the company would normally go all out for but will have to diminish due to the pandemic.

The course will also dive into the negative realities of how Disney is saving money in a time like this, looking at how services within the park are being streamlined to be more efficient for the company and how services that once may have been free have now changed to accommodate the financial losses.

Aside from learning about the parks, immersion and response to the pandemic, students will have the opportunity to network and learn from alumni of both OHIO and the program as well.

“Although many people may be tired of Zoom and Teams, a benefit we found in all of this is that we’re able to up the amount of people we bring in virtually to talk to the class about their experiences,” Novak explained. “We have many alumni who work at Disney and meet up with the group of students while we’re there to talk about what they do, but now having a new comfort level working virtually, we can increase the number of alumni and speakers we can bring into the class.”

Novak included that many alums of the program go on to work full-time for the company, participate in the Disney College Program, and some have even collaborated amid the pandemic to create a blog called Wishes & Wayfinding for young adults who want to share their love of Disney.

To take the course, students must submit an application found on the program’s website and provide references.

Editor's Note: This story is part of a series highlighting the ways OHIO is adapting their teaching to address major topics going on today.