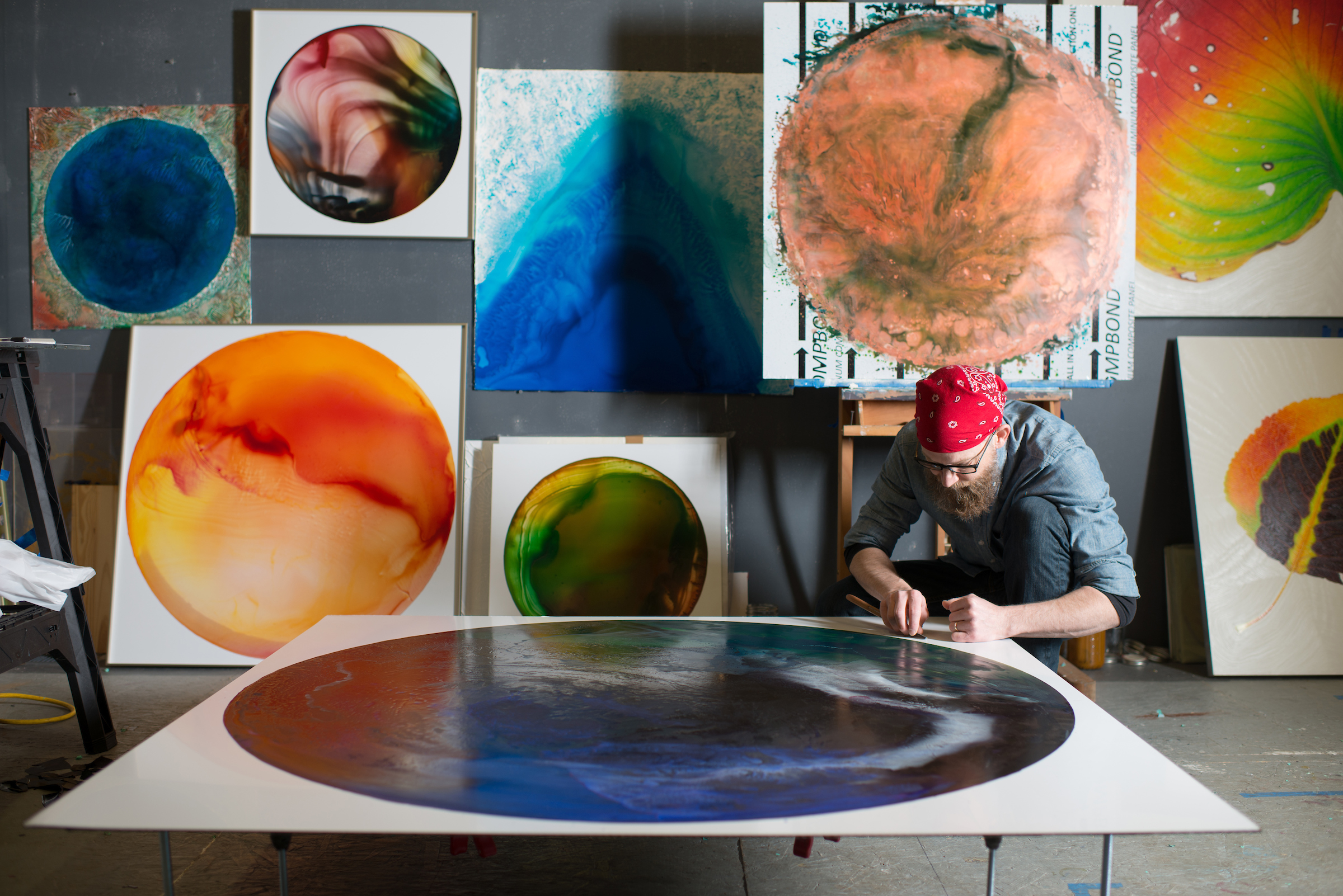 Ben Siegel John Sabraw painting in his studio. This photo and others, taken by UCM photographer Ben Siegel, were also featured in TIME.

A joint collaboration between two Ohio University professors, along with Rural Action, to clean streams polluted by acid mine drainage and use the project to produce pigment continues to pick up steam, as well as national attention.

True Pigments, the social enterprise launched by Rural Action driven by the work of Civil Engineering Chair and Professor Guy Riefler in the Russ College of Engineering and Technology, and Painting and Drawing Chair and Professor John Sabraw, in the College of Fine Arts’ School of Art + Design, was recently featured in TIME Magazine. With support from the Ohio Department of Natural Resources, a small test facility has been built at the Truetown Discharge site in Millfield, Ohio, reusing most of the materials from an earlier test site in Corning.

The goal is a full-scale facility at the new site, which will restore seven miles of Sunday Creek, create local jobs, and create a revenue stream that will not only pay for the treatment of the largest acid mine drainage site in Ohio, but also other projects.

Below is an excerpt from the TIME story:

Sunday Creek begins around Corning, a small town in southeastern Ohio, before snaking down 27 miles to connect with the Hocking River. Like much of Appalachia, the creek’s watershed was historically home to communities of coal miners, but the mines have since closed, leaving only their runoff: nearly 1,000 gal. a minute of water so badly contaminated that Sunday Creek is now home to the worst acid mine drainage (AMD) site in the state. John Sabraw, an Ohio University professor of art who is also interested in sustainability, first noticed the effects of AMD when exploring the area with an environmentalist group in 2007.

“As we toured southeastern Ohio, I was struck by local streams that are not only devoid of aquatic life, but are orange, red and brown, as if from a mudslide upstream,” recalls Sabraw. From the environmentalists, he came to understand the source of the water’s discoloration. “The colors were mainly from iron oxide—the same raw material used to make many paint colors…I thought it would be fantastic to use this toxic flow to make paintings.”

“Rural Action hopes to take a different approach with True Pigments, its water-treatment facility in Millfield, a town of fewer than 400 people through which Sunday Creek runs. Based on the research of another Ohio University professor—Guy Riefler, chair of the university’s civil-engineering department and a specialist on AMD treatment—Rural Action piloted a smaller facility farther up Sunday Creek at Corning, with a patent-pending process that takes in contaminated water, reduces its acidity, removes iron oxide and returns clean water to the source. The scaled-up facility at Millfield would produce 1,200 tons of iron oxide each year while simultaneously remediating seven miles of waterway.”

Sabraw, who first toured the area in about 2007, and Riefler have been collaborating on the project for more than a decade and look forward to seeing the next phase of the Truetown project come to fruition.

“This has been an incredibly rewarding project. My research goal has always been to use engineering concepts to clean up pollution,” Riefler said. “We are on track to affect real change in the region, which I am very proud of.”

If the next phase of the project goes well, there is potential to expand it significantly. The 1,000 gallons per minute flowing into Sunday Creek referenced in the TIME article is from a single discharge site, but there are plenty of others. And the pigments produced at the facility can be used not only for paint, but also in products including concrete, bricks, industrial coatings, agricultural fertilizer and cosmetics, said Michelle Shively, director of project development for True Pigments who previously served as Rural Action’s Sunday Creek Watershed Coordinator.

"None of us started out trying to make paint or pigments. That just came as a means to an end, which was our goal of treating the AMD and bringing these streams back to life,” Shively who has a bachelor's in environmental geography and master's in environmental studies from OHIO, said. “Through our team's collaboration, we’ve built a project that sits squarely at the confluence of engineering, art, social enterprise, and watershed restoration and has resulted in a game-changing technology that actually transforms the AMD pollution into a commodity that can pay for the water treatment.

“Never before have we been in a position to be able to afford to treat some of the worst AMD sites in Ohio,” Shively added. “At Rural Action, we're excited to see how True Pigments is able to expand operations to remediate other mine discharges throughout our region."

“Our collaborative team has been able to spur innovative, sustainable solutions, and thanks to the openness and supportive nature of the communities involved, we have also demonstrated that art is a necessary resource, and not merely a luxury,” Sabraw added.