From No. 189 to No. 6, OHIO’s social media efforts are leading the nation 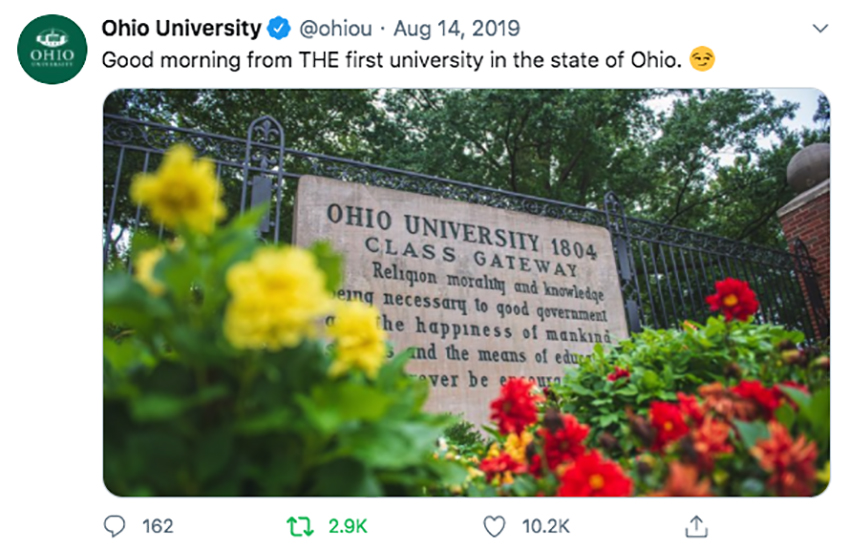 Ohio University’s social media efforts have been ranked sixth in the nation among NCAA Division I colleges and universities.

The report surveyed the Facebook, Instagram and Twitter accounts of 338 colleges and universities between June 1, 2019, and May 31, 2020, generating an overall engagement ranking for each institution. According to Rival IQ, the top-ranked institutions have high engagement rates on their social media accounts with average or better audience size and posting volumes.

“I could not be prouder of the work this University and our team have done to dramatically improve engagement across our social media platforms just in the last year,” said Robin Oliver, vice president of University Communications and Marketing (UCM), who joined the OHIO community in July 2019. “The heartbeat of that change has really been our social media specialist, Eli Burris, who joined us in May of 2019, and I am so thankful for his commitment to our University and the work he does to create positive dialogue about the OHIO brand. Over the past year, and through realignment, we have now built a robust team working with Eli to drive social engagement. I can’t wait to see what they accomplish together in the year to come.”

The increase in Ohio University’s social media presence coincides with the University’s strategic initiative to elevate marketing and branding efforts, with a goal of telling OHIO’s story across the state and beyond. Steps to achieve that goal have included the development of UCM staff dedicated to creating a comprehensive marketing and communications plan and strategy.

UCM staff who have been key in paving the way for OHIO’s social media success include Alaina Bartel, multimedia content coordinator; Eli Burris and Stephanie Fiorelli, social media specialists; Donna Gallo, digital strategy director; Carly Leatherwood, BSJ ’96, executive director of communications; and student interns who are applying the skills they’re learning in the classroom through service to the University.

But it all started with Eli Burris, BSJ ’16, who joined UCM in May 2019 as the office’s second-ever social media specialist. Burris has been instrumental in shaping the University’s social media strategy and defining its social media voice, drawing on both the skills he learned as an OHIO student and his family’s Bobcat legacy.

Burris was the 20th member of his family to attend Ohio University and truly bleeds green in both his work and his life—even his cats are named Athena and Rufus.

As an undergraduate studying in the E.W. Scripps School of Journalism, Burris was a member of the Singing Men of OHIO and its Section Eight a cappella collective, as well as the Student Alumni Board. He began honing his social media skills at the University, live-tweeting from local high school sports games for WOUB Public Media, co-managing the social media accounts for WOUB Sports and administering the social media accounts of WOUB’s student-produced “Hardwood Heroes” program.

During his senior year at OHIO, Burris served as a marketing and social media intern and a social media manager for University College. His accolades in those roles include spearheading an Instagram awareness campaign highlighting OHIO’s Learning Communities and proposing, creating and operating the initial Snapchat account efforts for the University’s Bobcat Student Orientation, which generated more than 60,000 views.

After serving as a social media coordinator for SportsOhio and a digital media specialist for the Ohio High School Athletic Association, Burris returned to Ohio University, fulfilling a dream he had to work for his alma mater.

“Funny how life just brings you back to the places that mean the most,” he tweeted on his personal Twitter account in announcing his new job at UCM.

In his work at UCM, Burris has developed social media content that is bold, authentic and full of heart. From the #WallpaperWednesday series he launched to the work he did to secure blue check verifications for the University’s social media channels, Burris has leveraged social media to share important information and the stories of Ohio University, engage with current and prospective members of the University and build an OHIO community online.

His most well-known social media post came in August 2019 when another university in Ohio made national news for attempting to trademark the word “the.” Seizing the opportunity to spotlight Ohio University’s noteworthy place in history and rally Bobcat pride, Burris posted a simple message on the University’s social media accounts: “Good morning from THE first university in the state of Ohio.” The tweet alone generated well over 10,000 likes, nearly 3,000 retweets and 162 comments.

“The very first day I met Eli I could tell how much passion he had for what he did,” said Victoria Kopp, BSC ’20, who worked as Burris’ assistant during her last three months as an OHIO student. “Working beside him, I learned not only key parts of running social media for an entire university, but he also took his own time to teach me photography and other skills he knew. He is so intelligent and has completely changed the social media game, especially for higher education.”