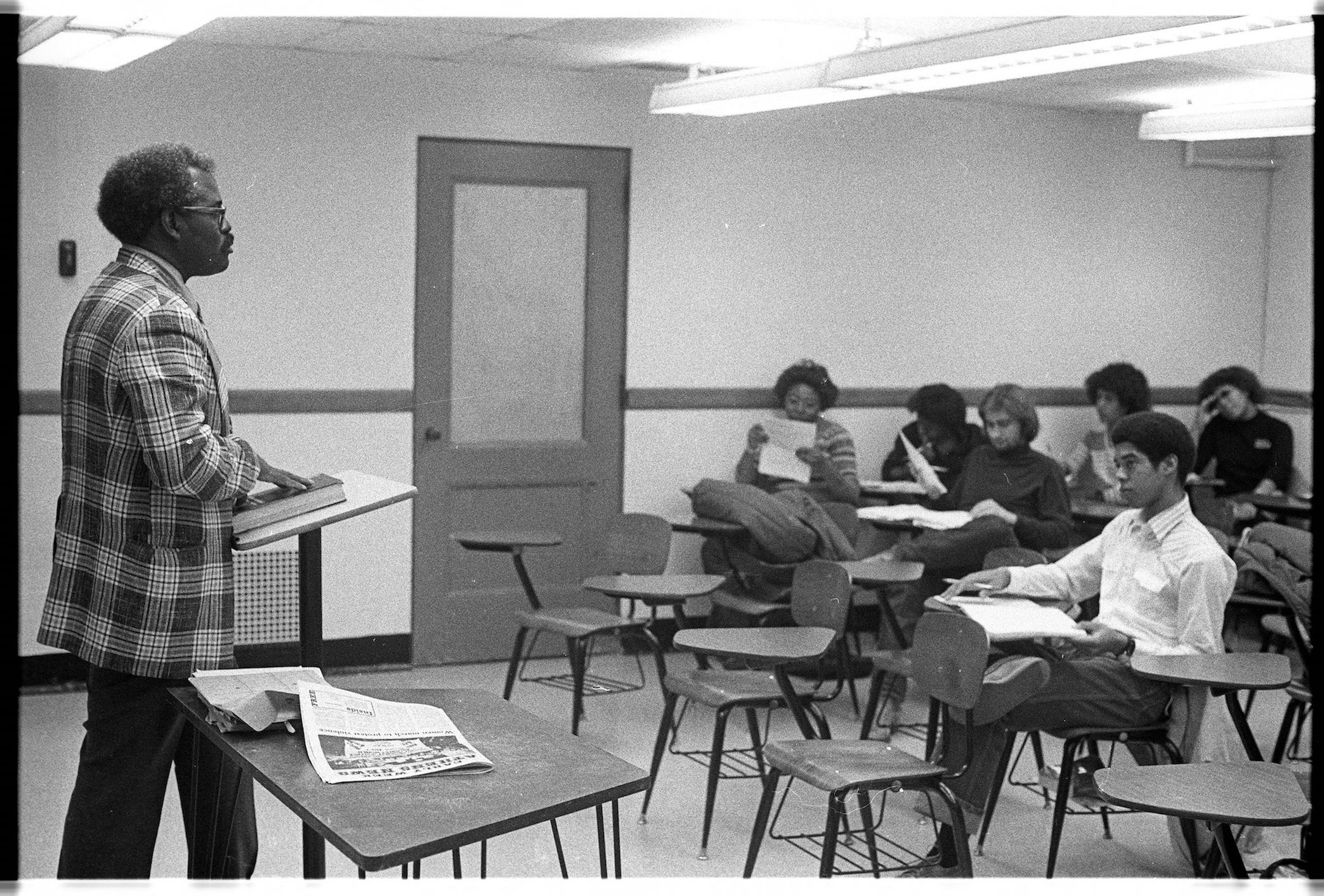 He arrived at OHIO in 1978, having earned a Ph.D. from the University of Minnesota. He chaired the African American Studies Department for nearly two decades.

“After graduating from Frederick Douglass High School in 1951, Ted joined the U.S. Air Force, which afforded him opportunities central to his life: long-term friendships, international travel, and an education through the GI bill,” according to his obituary in the Athens Messenger.
“Following a four-year tour of duty, Ted returned to Baltimore to earn a bachelor's degree in English from Morgan State University (then College, 1959). He went on to earn a master's degree and doctorate in American Studies from the University of Iowa (1964) and University of Minnesota (1972), respectively. Ted spent his career in academia teaching, primarily, in his passion areas: the African American experience through literature, arts, and culture.”

“Dr. Vattel ‘Ted’ Rose was a true gentleman and scholar,” says Dr. Akil Houston, Associate Professor of Cultural and Media Studies at OHIO. "His trademark humility and soft-spoken manner were perhaps natures' way of balancing the brilliance he possessed. A person with lesser humanity would surely be full of themselves, Dr. Rose was never that. Always down to earth, he was witty, engaging, and had a wonderful sense of humor.

“I count him among the most important American literary scholars. Among many of his accomplishments while chair of the African American Studies Department was the first publication on Black Independent film in the United States: Black Cinema Aesthetics: Issues in Independent Black Filmmaking,” Houston continues.

“Scholars Dr. Francine Childs and Professor Robert Rhodes were keepers of the vision of AAS, along with Dr. Rose,” says Houston, also noting that as chair, Rose was able to secure five-tenure track lines to ensure department status for African American Studies within the College of Arts & Sciences in the early 1980s.

“I got to know Ted Rose when he advised me on a Tier 3 course I was proposing on Roman slavery,” says Dr. William Owens, Associate Professor of Classics & World Religions. “Ted was a wise, gracious, and generous colleague. After he retired, I would see him sometimes in Baker Center—an opportunity to talk that I will miss.”

The Athens News wrote a moving piece — “Exiting African-American Studies chair leaves big shoes to fill” — about Rose in 2001 as he was retiring after more than two decades as chair of the African American Studies Department:

One hears rumors of a certain professor with knowledge so great he puts an American literature library to shame; of a man who has worked tirelessly to sustain and develop Ohio University’s African-American Studies Department for more than 20 years; of a man who owns every classical and contemporary jazz album known to man; of a man who forgets more than most of us will ever remember.

But when one climbs to the third floor of Lindley hall to visit this man in person, a surprise awaits: this worldly, brilliant, dogged professor sits mildly behind mountains of papers in an office in disarray. His words of greeting are not powerful, imposing or impressive; rather, he shrugs at the mess with an embarrassed smile and explains, “I'm moving.”

“(Rose) is a gentlemanly intellectual giant who in one conversation can quote Miles Davis and Thoreau," said Tanya Thompson, Rose's friend of more than 20 years. "He's one of the kindest, most thoughtful and knowledgeable individuals. He is definitely heads and shoulders above most.”

Professor Donald Borchert, who chairs OU's philosophy department, agrees. “Dr. Rose is one of the self-effacing, humble pillars of the faculty,” he said. “He provided a quiet, stabilizing influence in the department over some very difficult years.”

... Thompson said that Rose's students never stop asking about him. “People cannot come back for the reunions without asking, ‘Where's Dr. Rose? How has Dr. Rose been,’” she said.

Read more about Rose in the Athens News story about his retirement.