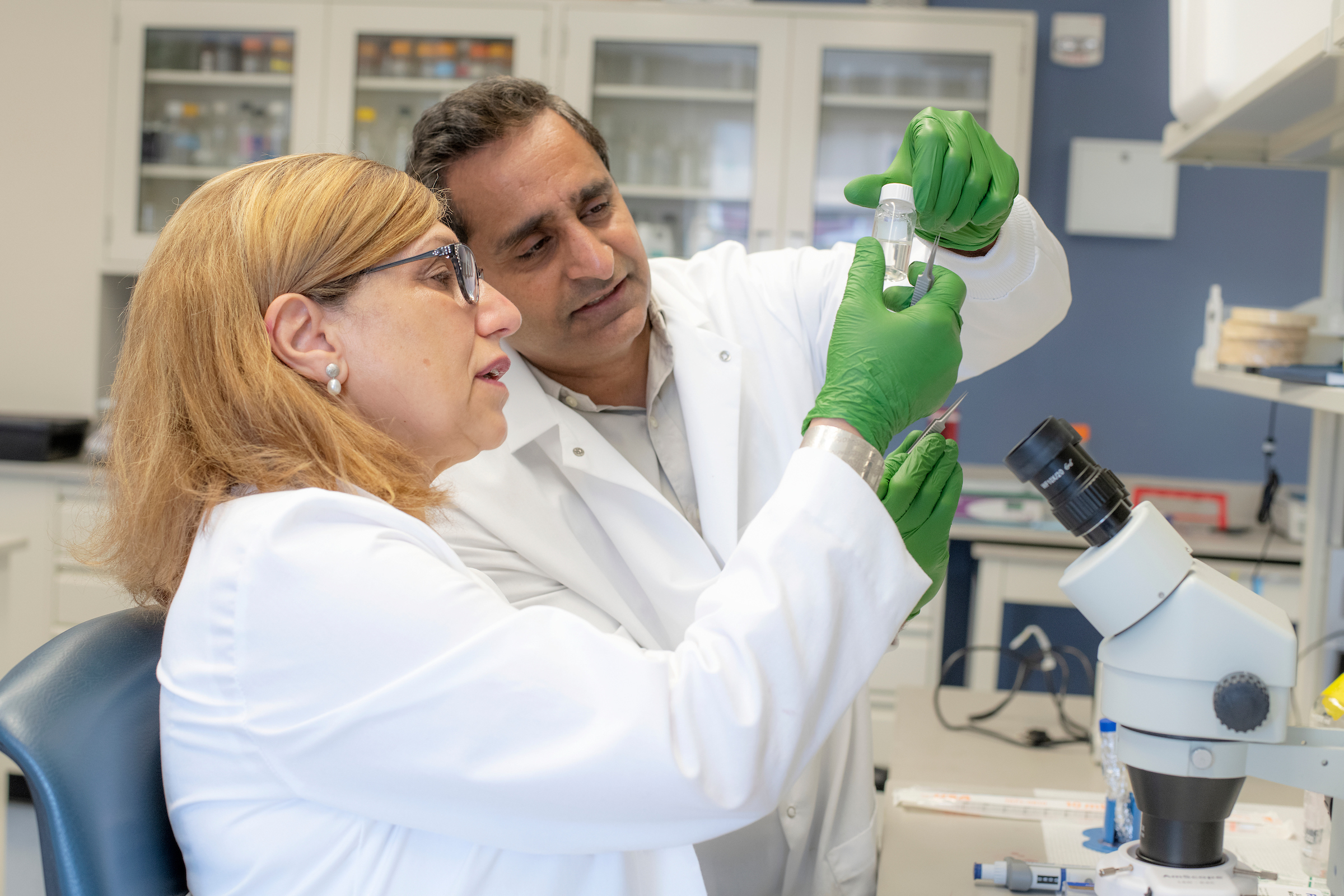 While driving to a meeting together about two years ago, two researchers from the Ohio University Heritage College of Osteopathic Medicine, Sonia Michael Najjar, Ph.D., and Vishwajeet Puri, Ph.D., began chatting about their respective lines of research. Very quickly, both scientists got excited about how they might join forces to open a new pathway in the study of metabolic disease.

“All of a sudden, an idea struck both of us,” recalled Puri, a professor in the biomedical sciences department and holder of the Heritage Endowed Professorship in Diabetes, Osteopathic Heritage Foundation Ralph S. Licklider, D.O., Research Endowment. “We thought, why can’t we try a new approach, basically combining both of our expertise, hers in liver and mine in adipose tissue?”

By the end of a couple hours of intense discussion, the two had sketched the outlines of a collaborative research agenda. The National Institutes of Health apparently shares their excitement about the venture; it recently gave their grant application for the project, “Linking fat metabolism to hepatic fibrosis,” an exceptionally high score and funded it at more than $2 million over four years.

“That’s the beauty of having two scientists with a broad vision discuss their science and challenge each other until they end up realizing how they can synergize, and how if they team up, how quickly they can promote a new insight on metabolic disease,” said Najjar, a biomedical sciences professor and Osteopathic Heritage Foundation John J. Kopchick, Ph.D., Endowed Eminent Research Chair. “We both are lucky to have found each other, definitely.”

“Individually, Dr. Najjar and Dr. Puri have stellar NIH-funded research programs that greatly augment the research portfolio of the Heritage College and address major health problems,” said Darlene Berryman, Ph.D., R.D., L.D., associate dean for research and innovation at the Heritage College. “Their collaboration is an unexpected bonus and represents a promising new approach to the epidemic of fatty liver disease.”

Puri, who came to the Heritage College in 2015 from the Boston University School of Medicine, researches how the body stores and breaks down fat and the connection of this process to obesity, type 2 diabetes and other metabolic diseases, including fatty liver disease and cardiovascular disease.

Najjar, attracted in 2016 from the University of Toledo College of Medicine and Health Sciences, has focused her research on obesity, diabetes, fatty liver disease and their cardiovascular complications.

In the scientific world, each researcher’s name is associated with a specific protein.

Najjar has discovered how CEACAM1, a plasma membrane glycoprotein, promotes clearance of insulin from the liver, which affects insulin action and fat metabolism; a reduction of CEACAM1 in liver cells leads to non-alcoholic fatty liver disease (NAFLD) and its progressive form, non-alcoholic steatohepatitis (NASH), a major health problem in America and around the world.

Puri is the discoverer of FSP27, a fat-associated protein that plays a role in regulating fat metabolism and insulin sensitivity in human adipocytes (fat cells).

Puri’s protein is at work in fat cells and Najjar’s in liver cells – but it looks as though the two proteins work together. FSP27 regulates breakdown of fat (lipolysis) in adipose tissue, which has an impact on liver function. Reducing FSP27 in fat cells leads to the release of free fatty acids into the liver, first to be burned (oxidized). When the supply of fatty acids exceeds the liver’s capacity to burn fat, fat accumulates in the liver (hepatic steatosis), and inflammation develops to cause NAFLD.

Najjar had found that a high-fat diet leads to a similar mechanism of free fatty acid release and fat accumulation in the liver, and that this is mediated chiefly by reduced CEACAM1 levels. Reduction of CEACAM1 levels in other liver cells can also lead to fibrosis – a thickening and scarring of liver tissue that’s an integral component of NASH and the most common reason for liver transplants.

It is the nature of this protein “cross-talk” between fat and liver cells that they want to investigate in detail, in hope of finding out how it works at a molecular level. Their overarching goal is to promote novel therapies against liver fibrosis. To date, there is no FDA-approved drug to cure the condition.

“In this grant, we look more deeply into the mechanism of this interaction,” she explained. “But more specifically, we want to shed more insight on how FSP27-CEACAM1 interact to cause fibrosis. There’s a dire need to have a therapeutic target and to develop a medication specifically targeting fibrosis in NASH.”

One of the new study’s aims will be to find out whether liver injury can be blocked by increasing CEACAM1 in livers of mice that have had FSP27 levels reduced in their fat cells. If this works, it opens the possibility of finding a drug to prevent/treat fibrosis directly by inducing CEACAM1 levels in the liver.

Currently, it’s thought that once fibrosis begins, it’s not reversible; Puri and Najjar’s work holds out the hope that maybe it is.

This is also important in the context of so-called “lean NASH,” a form of NASH not linked to obesity that’s on the rise. A common way to treat NAFLD now is with insulin-sensitizing drugs, but this may not be effective with the lean version of the disease.

The researchers will also be looking at “cell-autonomous” fibrosis that can originate in fat-storing stellate cells in the liver, independently of what’s happening in adipose tissue. They will reduce FSP27 in these cells to investigate whether this causes fibrosis by reducing CEACAM1 levels.

Given how CEACAM1 and FSP-27 appear to work together in the body – and how Najjar and Puri’s expertise uniquely positions them to address this important health issue – the success of their teamwork seems almost inevitable.

“Sometimes we joke around and say, ‘We were destined to work together,’” Puri said. “Think about it. She was in Toledo, and I was in Boston. We came here to Ohio University, with her expertise and mine, and we just talked to each other and thought this could happen, and it happened. And this is going to move the field forward.”