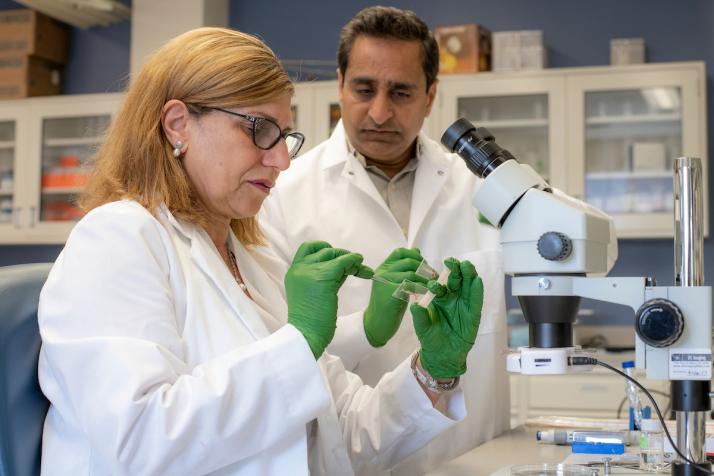 ATHENS, Ohio (April 11, 2019) – Two top researchers at the Ohio University Heritage College of Osteopathic Medicine are working with two other institutions on a federally funded project to investigate why Hispanics are more prone to develop non-alcoholic fatty liver disease (NAFLD).

Project leader Sonia Michael Najjar, Ph.D., Osteopathic Heritage Foundation John J. Kopchick, Ph.D., Endowed Eminent Research Chair, said the cooperative venture will connect different and complementary lines of research “in a fascinating and a powerful way. I can’t stress enough how critical that is – it takes a village to move a project of this magnitude forward.” The research recently received nearly $3 million in funding from the National Institutes of Health (NIH).

Puri agreed that the researchers’ interests and expertise provide a strong foundation for these studies.

“This is a combination of primary care, basic and translational, and clinical research,” he said. “It’s a perfect combination of interdisciplinary research.” That’s one reason, he says, why the NIH is supportive of the project, and why Najjar and Puri consider themselves fortunate to have Friedman and Zarrinpar as collaborators.

The National Institute on Minority Health and Health Disparities is funding the study at nearly $614,000 for the first year. With similar levels of funding for each year of the five-year project, the total award is for more than $2.9 million, making it one of the largest research grants the Heritage College has ever received.

“Drs. Najjar and Puri embody the spirit of discovery that is fueling medical advancement at the Heritage College,” said Ken Johnson, D.O., Heritage College executive dean and Ohio University chief medical affairs officer. “Their study of disparities in fatty liver disease – specifically, its higher incidence among people of Hispanic origin – directly correlates to our mission of improving the health and well-being of underserved populations. Tremendous gratitude is owed to the National Institutes of Health, whose support of this important research will yield improved treatment and prevention in years to come.”

Non-alcoholic fatty liver disease (NAFLD), including its more progressive form, non-alcoholic steatohepatitis (NASH), is the most common liver pathology in the United States. It occurs at higher rates in Hispanics than in non-Hispanic whites, to an extent that makes this ailment one of the nation’s most serious health disparities.

Previous research comparing a small sample of healthy livers from Hispanic and non-Hispanic liver donors uncovered genetic differences that have led scientists to believe that a significant amount of the increased susceptibility of Hispanics to NAFLD/NASH is due to variations in genes. “The genetic component is definitely significant,” Puri said. The new NIH-funded project will seek to identify in more detail the underlying molecular pathways in human cells, with the hope of eventually generating novel therapies to prevent onset of the disease.

Hispanics are also more prone than others to build up abdominal fat, and the researchers would like to find out if there is a causal connection between this factor and higher rates of NAFLD/NASH.

The study will link the main research areas of Najjar and Puri, who have pioneered major discoveries related to the proteins CEACAM1 and FSP27 (or CIDEC), respectively. CEACAM1 is a plasma membrane glycoprotein that Najjar has found to maintain normal metabolism by promoting insulin clearance and lowering fat production in the liver, while FSP27 is a fat-specific protein that Puri has found to play a role in positively regulating insulin sensitivity and fat metabolism in humans.

A working hypothesis is that lower FSP27 levels in the abdominal fat tissue of Hispanics lead to increased release of free fatty acids into the liver to be burned. Excessive fatty acid release markedly lowers CEACAM1 expression in the liver, a factor which Najjar has shown to cause fatty liver disease in mice. The severity of NAFLD correlates positively with the degree of the loss of CEACAM1 in the liver of obese and insulin-resistant patients.

In one part of the study, the researchers at Charles Drew University will analyze data on liver function from a national database from the Centers for Disease Control and Prevention to try to determine how big a role demographics, acculturation, physical activity, smoking, body composition, diet and genetics play in NAFLD/NASH.

In another part of the study, teams from the Heritage College and the University of Florida will investigate whether Hispanics show a lower level of FSP27 in their fat tissue and of CEACAM1 in their livers by comparison to non-Hispanic whites, and if this is underlined by higher levels of lipolysis leading to more fat deposition in the liver. Working on cell and tissue samples they will look for changes in liver function associated with changes in lipolysis.

Ultimately, the Heritage College researchers will seek to determine whether CEACAM1 levels are reduced in the livers of Hispanics compared to those of non-Hispanic whites, and whether this constitutes a missing molecular link between obesity, insulin resistance and NAFLD/NASH in Hispanics.

A commitment to stop ‘the new epidemic’

Najjar noted that she has determined in past research that mice that had been genetically modified to express more CEACAM1 in their livers do not develop NAFLD/NASH even on a high-fat diet.

“You can give the mice as much high-fat as you want, and they are totally protected from developing NAFLD/NASH,” she said. “Moreover, introducing CEACAM1 to the liver of mice after high-fat is initiated reverses all metabolic abnormalities caused by high-fat feeding.” This raises the possibility that a drug intervention promoting higher CEACAM1 levels might be a treatment for the disease in humans.

Puri added that future research will be made easier as the Heritage College research team uses what it learns from the new NIH-funded study to develop genetically modified mice lines that can stand in for human research subjects.

“We are generating ‘humanized’ mouse models for future research,” he said. “And we hope this research will help us identify novel molecular factors that could be used as targets in therapeutics for fatty liver disease.”

In addition to being a sterling example of collaborative, multi-pronged research, Najjar said the new study is going after a disease that’s a significant and growing global health problem.

“Fatty liver disease is the new epidemic, and we are not ignoring it,” she said. “It is my scientific mission to solve this issue and find a drug that induces CEACAM1 to curb this disease.”-30-

Ohio University strives to be the best student-centered, transformative learning community in America, where approximately 40,000 students realize their promise, faculty advance knowledge, staff achieve excellence, and alumni become global leaders. OHIO is committed to fostering, embracing, and celebrating diversity in all its forms. Our Athens Campus offers students a residential learning experience in one of the nation’s most picturesque academic settings. Additional campuses and centers serve students across the state, and online programs further advance the University’s commitment to providing educational access and opportunity. Visit www.ohio.edu for more information.