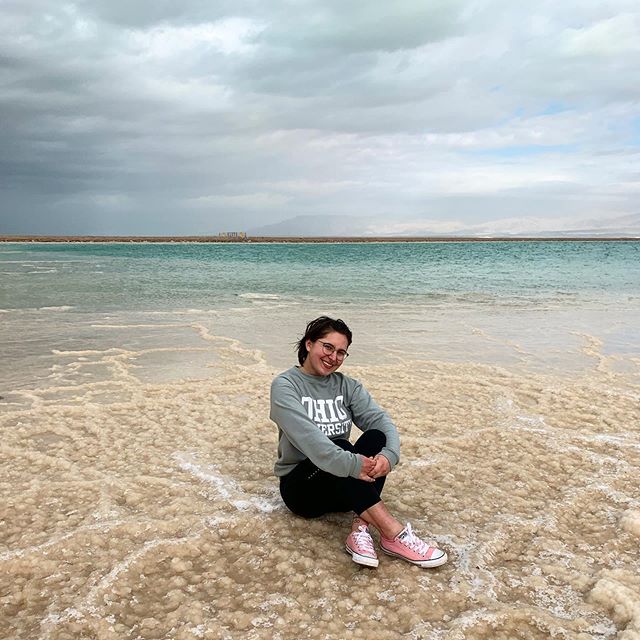 For many high school seniors across the country, a break or gap year between graduation and college is the best possible next step. Maxeen Ramlo was one of these students.

This break was the perfect plan for her at the time; however, it would go on to have an even greater impact as she went through her first two years of college.

Ramlo is currently a sophomore student in the Ohio Honors Program (OHP). She is majoring in mechanical engineering and is planning to minor in French. During her first two years at Ohio University, Ramlo has taken advantage of the three pillars of OHP: community engagement, leadership and research or creative activity.

Before she could become the successful Bobcat that she is, Ramlo spent three months of her gap year as a volunteer at refugee camps in Greece. During her time abroad, she worked to make refugee families’ lives easier and safer, providing them with food and clothing when they arrived on the island of Lesvos.

Ramlo learned firsthand how chaotic, confusing and stressful it can be for Turkish refugees. It was not abnormal for boats to arrive when volunteers were sleeping.

“The first time I went over, we were serving food at a place in the northern part of the island where a lot of the boats were landing. It was the closest to Turkey and the [refugee] camp was an hour away,” she said. “So, normally they land, and then they stay the night at this smaller center. I remember the first night a boat landed, and I woke up in the middle of the night and ran over there. I was making food for 100 people. It was crazy.”

She also realized the harsh realities of the lives of refugees. In most cases, women and children leave the boats first. The men arrive usually five to ten minutes later in a panic, worrying that they won’t find their loved ones. For this very reason, one of the most important rules that the camp has is to not separate the families. However, it is difficult to explain that when there is a very strong language barrier.

“They panic,” Ramlo said. “You can’t explain what’s happening because there is a huge language disconnect. You can be looking at this person and the communication is so hard, but the emotion is still there. You can understand what is happening even though you can’t really convey it with words.”

By the end of her trip, Ramlo had experienced the struggles that the refugee families face. She watched one get so overwhelmed that they attempted suicide. She saw 15 volunteers cram into a 10-by-10 tent. She returned to the United States with a brand-new perspective that would come back to inspire her a year later.

Upon arriving home in northeastern Ohio, Ramlo had no idea what career she wanted to pursue. She had applied to colleges and universities in high school but had to reapply after she came back from Greece. Ohio University was a logical choice when browsing through schools because her sister, also a Bobcat, was a strong influence on her to apply.

The OHIO Honors Program (OHP) was in its pilot phase when Ramlo applied to the university. Despite the new waters she would be stepping into, Ramlo was intrigued by the co-curricular experiences and benefits that the program offered.

“I felt like I missed out in high school,” she said. “I was kind of involved, but I rode horses so that was my involvement. I wanted more. When I went to internship interviews and job interviews, I wanted to talk about things outside of the classroom that other people weren’t going to be able to talk about.”

Bobcat Student Orientation (BSO) was what really sealed the deal for Ramlo. There, she spoke with Dr. Christy Zempter, her honors advisor who is also the director of OHP. They discussed co-curricular and curricular experiences and how students can complete them. Zempter said students can find these experiences on their own or work with their OHP adviser to identify appropriate opportunities.

During the summer between her freshman and sophomore year, Ramlo was able to complete one of these co-curricular experiences by returning to Greece to volunteer with refugees again.

“I missed being there so much,” said Ramlo. “I was reading in the news about how they are changing how they operate in Greece to make deportations easier. It’s not fun stuff. So being able to have an impact there grew to mean so much to me.”

Her gap year experience began to come full circle when Ramlo spent the month of June on the same Greek island, this time helping with the clothing warehouse and children’s activities. She did “manicures” with some of the refugee children and provided clothing to people who lost their belongings.

“When I was there, there was a boat crash. One of the dinghies sank on its way over,” she said. “A lot of people died but the people that had survived lost almost all of their belongings, so being able to be there and give something to them, even if it was just a few pairs of clothes, was really meaningful.”

Ramlo was also able to connect her time in Greece to her career. As an engineering major, she admitted that volunteering with refugees doesn’t connect to her classwork at first glance; however, she thinks engineering can become more people-conscience as a profession, a reason the Russ College of Engineering and Technology’s push to “create for good” resonates with her.

“How is what I’m making going to affect the population? How can I make these situations better?” Ramlo said. “The camps, for example. I’m not a civil engineer, but they need someone to design those places. How are they doing sewage? How are they going to put all these people here safely? Most engineers don’t think of that when they go into class.”

She brought that reflection back with her to Athens at the beginning of her sophomore year. Having experienced community engagement and leadership, it was time to tackle the third pillar of the OHIO Honors Program: research and creative activity.

In an honors class, her professor pushed Ramlo and her classmates to reach out to professors and learn about their research. Ramlo loved the idea of leadership and community engagement, but she never thought that she would enjoy research. For her assignment, she reached out to Dr. Timothy Cyders, an associate professor of mechanical engineering who is studying the 3D printing of metals.

Three months later, Ramlo is now a student research assistant with Cyders. Her research fulfills a co-curricular experience but is also a passion of hers that she never thought she would have.

“We made a sample today, drilled holes in it and did hardness testing around it,” Ramlo explained. “Then, we used a press to flatten the holes so they would close. It was so cool to watch. I never came in thinking I would be a research person. It showed me something that I’ve found I love. I went to my friends and was like, ‘This is what I did today!’”

Ramlo is planning to continue her research with Cyders over the summer and take classes as well. In the fall, she hopes to study abroad in France to complete her minor.

In addition, Ramlo’s co-curricular opportunities have shown her the importance of experiential learning, she said. She also thinks that they have helped her develop interpersonal skills and become a stronger leader.

Outside of her own experiences, Ramlo has had an incredible impact on OHP and the community surrounding the program. Zempter believes that Ramlo embodies the ideals that OHP hopes to foster in their students: curiosity, thoughtful scholarship, engagement, and openness to new perspectives and experiences.

“Ramlo has pursued an incredible range of opportunities, but what consistently impresses me is her ability to make connections across these very different experiences, both in and out of the classroom,” Zempter said. “This is the hallmark of an honors education focused on experiential learning, and Ramlo provides a great model for achieving it.”

Now, nearly two full years into her college education, Ramlo has been able to tie her gap year into her experiences in Greece. Furthermore, the opportunities presented to her by OHP are something that she doesn’t believe she would have encountered if she hadn’t entered the program. Both of those have influenced her future plans, where she wants to continue doing community service and be involved in the world community, whether or not it is directly tied to her career.