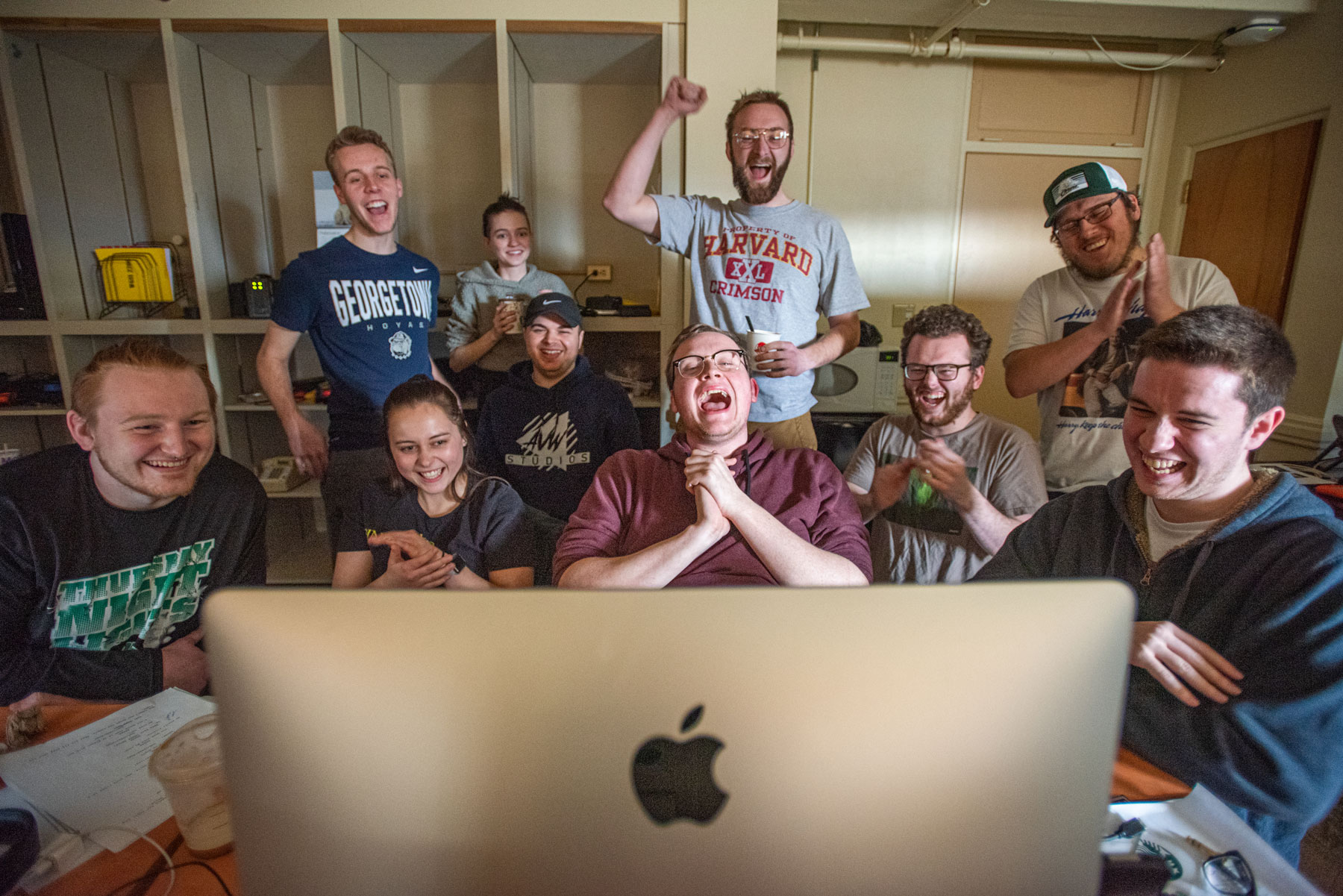 Praise be to the fern. The Church of Knowledgeology. Synonyms of Science. Separately, these phrases won't make any sense to you. Put them together, though... and they still probably won't make sense. At least not yet.

Welcome to The 48-Hour Shootout, where creativity is the name of the game.

The phrases were made up by Team Sad Face, one of 18 teams that competed in, and ultimately won, OHIO's School of Media Arts & Studies' 18th annual 48-Hour Shootout. The event gives students two days to write, direct, shoot and perfect a 5-minute film.

As if a time constraint weren't enough, there are a few rules. All creativity must take place within the 48 hours, including writing, rehearsals, costume and set design, shooting, editing and sound design. Equipment and locations could be secured prior to the competition, and cast can also be recruited ahead of time. All footage must be shot during the 48 hours — no stock footage, archival footage, or footage shot at another time is permitted in the films.

Additionally, immediately before the event kicked off, the captain of each team was randomly assigned three things they had to incorporate into their film: A prop, genre and line of dialogue.

Waiting anxiously in a conference room in Lindley Hall, Team Sad Face, surrounded by snacks, grabbed their phones and waited for a text from their captain, senior Beth Miller.

The clock struck 6 p.m. It hit 6:01 p.m. Another minute passed as worry began to set in. The team joked that they were already at a disadvantage, losing two minutes. Should they call Miller to get their three guidelines?

A collective, “there it is!” was let out as the team received a text from their captain.

Line of dialogue: “Who invited that kid?”

Their minds began to race, shouting out random ideas that bubbled in their heads. What if we had a talking wallet? What if we have an evil Boy Scout who picks up someone’s wallet, and his name is Grommet? Team Sad Face subsequently spent the next several minutes Googling what documentaries they could play off of.

The team’s director, junior Collin Black, secretly wanted their genre to be a musical so they could stay up all night writing music. Although they didn’t get a musical, they were still up until 4:30 a.m. writing scenes and a few songs. They began filming just four hours later.

Later referred to as a “rockumentary,” their film, “Praise the Roof,” follows a cult-like band who broke up due to religious differences. Junior CJ Dawson portrays Tom Johnson, who left the band and devoted his life to Christianity. Johnson now works as a human-counter for the U.S. Census Bureau. He eventually finds himself confronting his old bandmates. The team of 11 students came up with that idea in less than an hour and flushed it out throughout the weekend.

Their dedication to quality is readily apparent in the film. The students acted out each scene at least six times, sometimes more when they couldn’t stop laughing at their lines. They made sure the audio and lighting was perfect, and some went as far as adapting British accents. These photos show the events that transpired from 5 p.m. Jan. 21 until 9 p.m. Jan. 23. 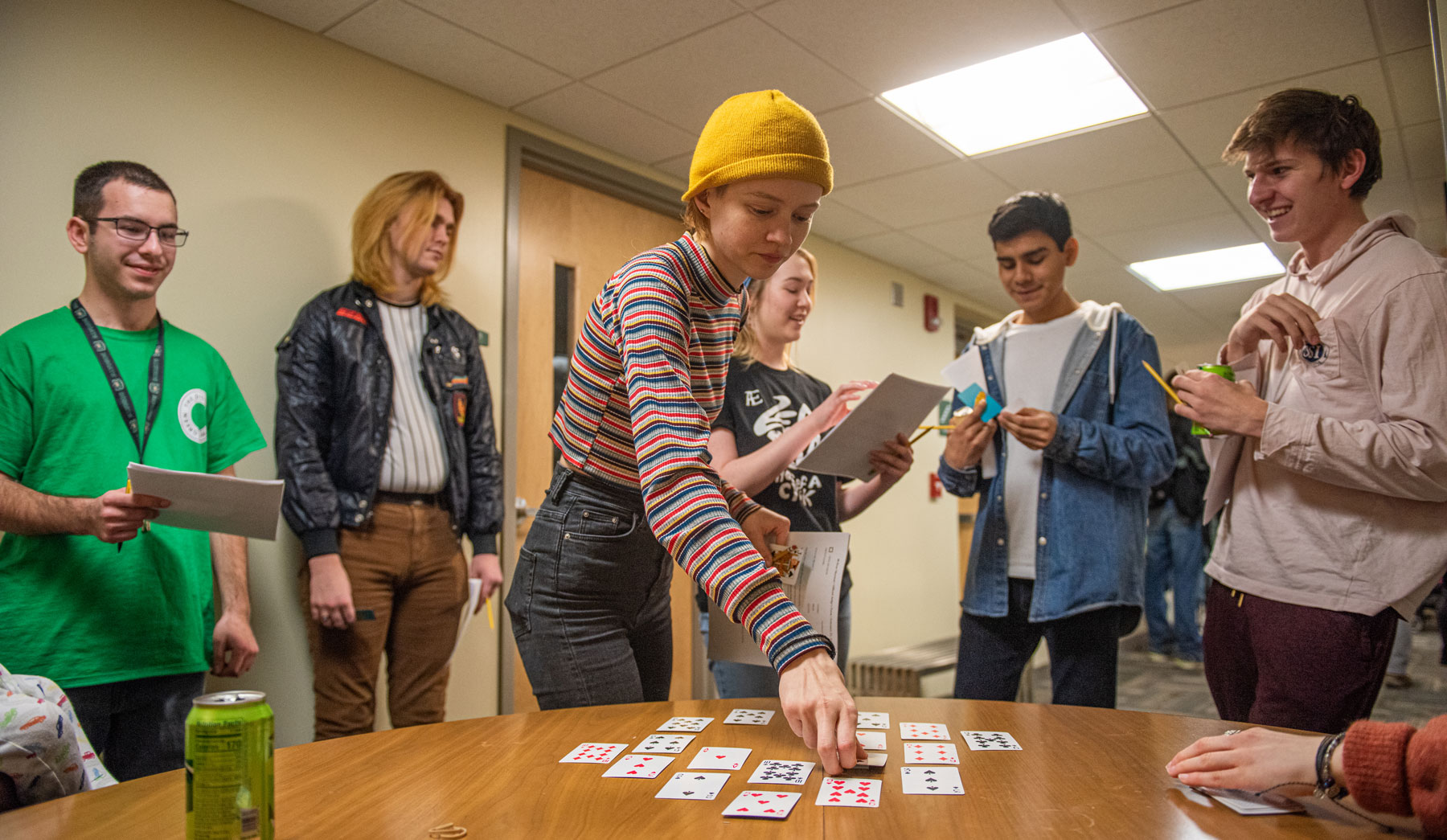 Friday, 5:07:18 p.m. | Senior Beth Miller chooses the team's line of dialogue before the 6 p.m. kickoff. Miller was the team's captain, the producer, and the locations manager. 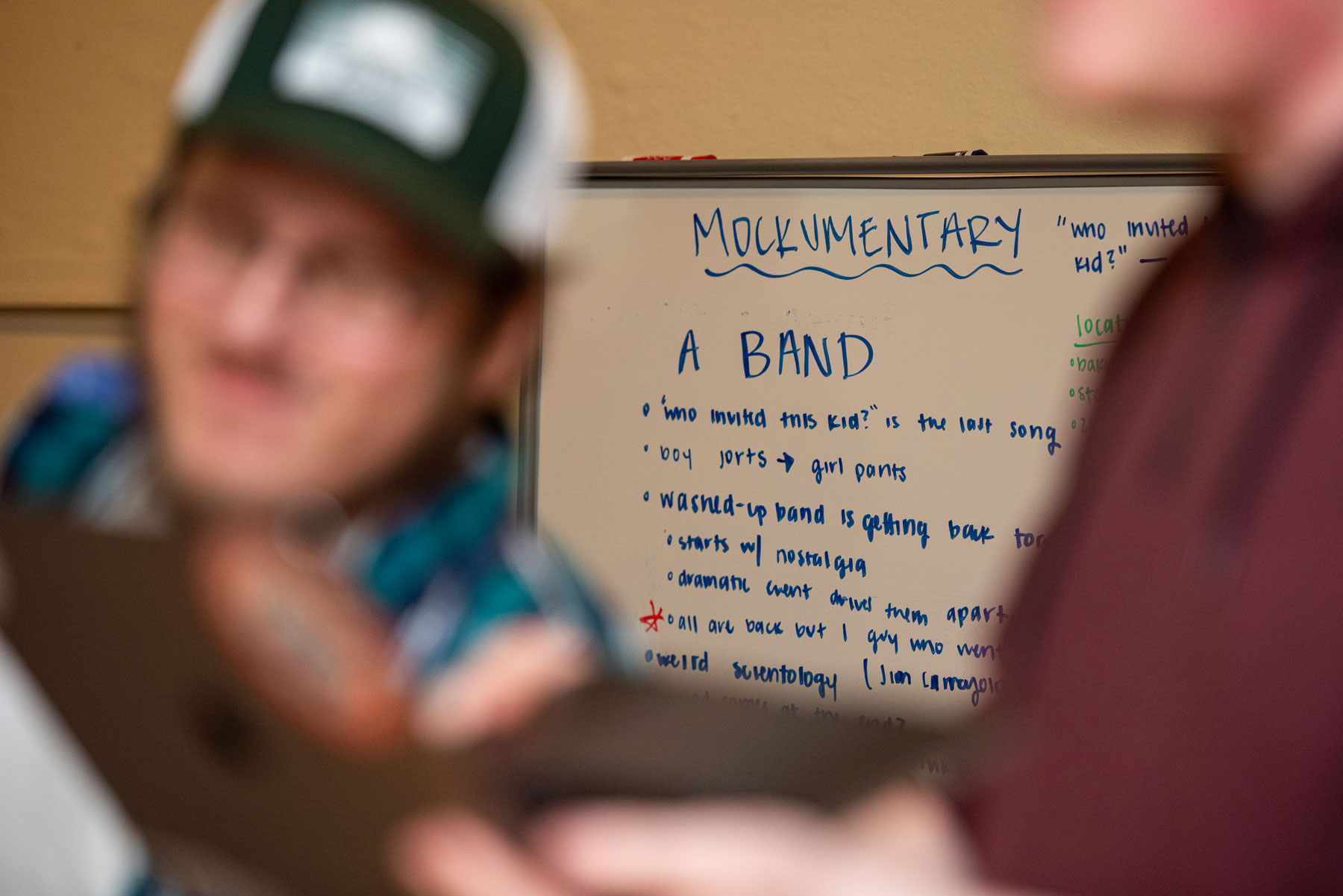 Friday, 6:46:43 p.m. | Once the team knew they received a mockumentary as their genre, they brainstormed for a few hours and landed on a weird twist on the Church of Scientology. 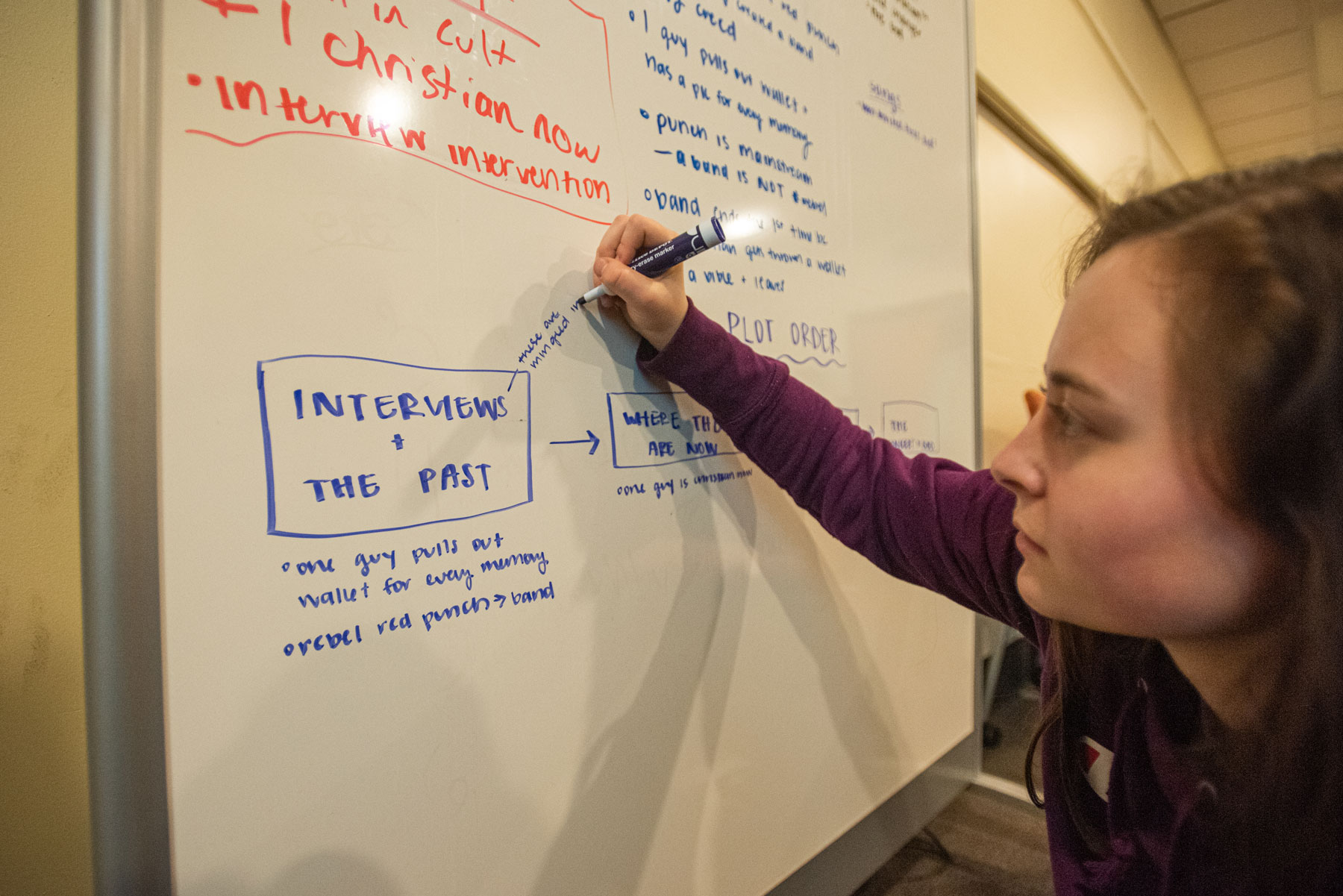 Friday, 7:04:52 p.m. | Senior Kenzie Keaton, the team's video editor, made sure to write down all of their ideas into a cohesive storyline. 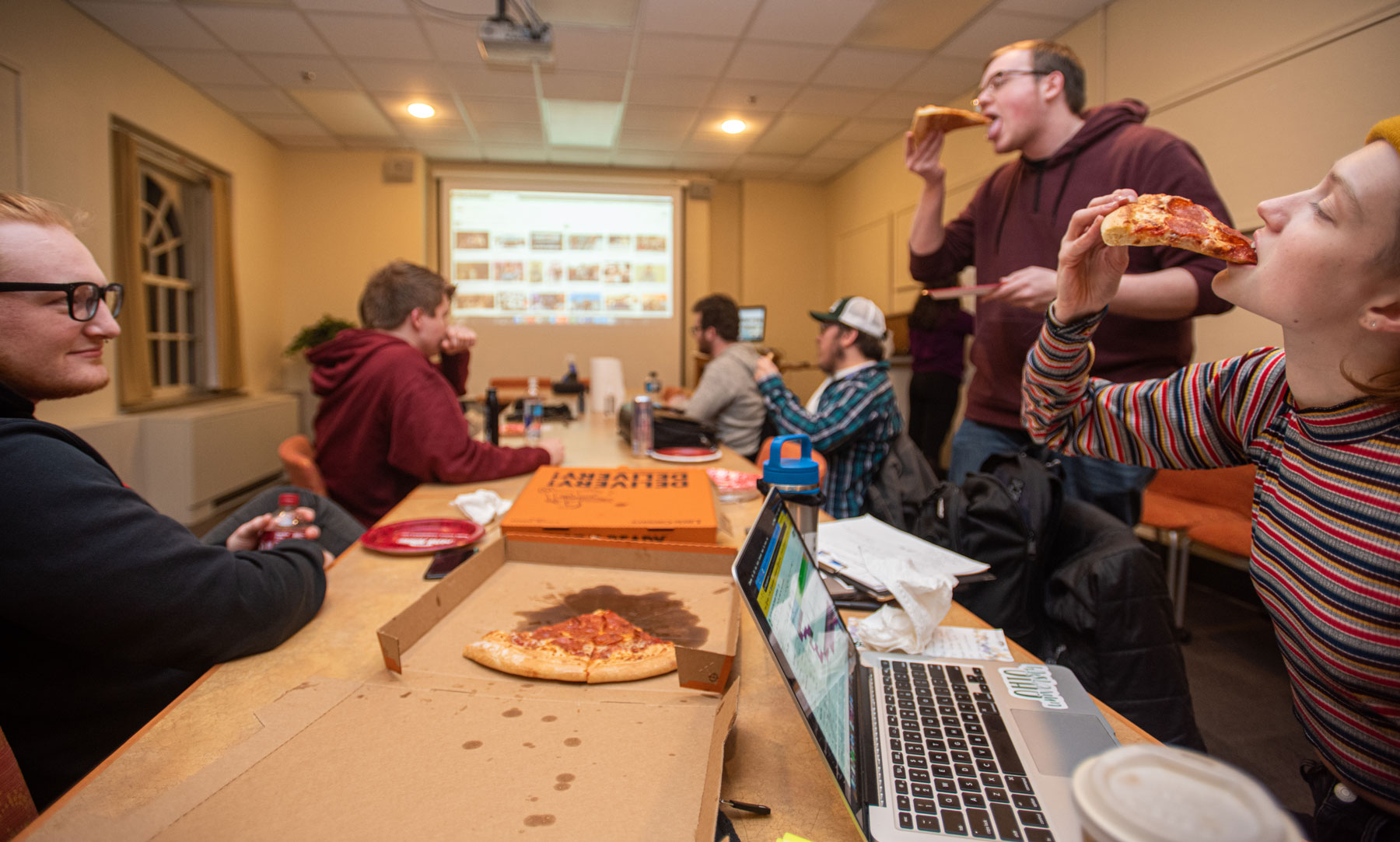 Friday, 6:24:07 p.m. | Senior Colton Wheeler, left, who created the graphics for the video, made sure to grab a few pizzas for his teammates. 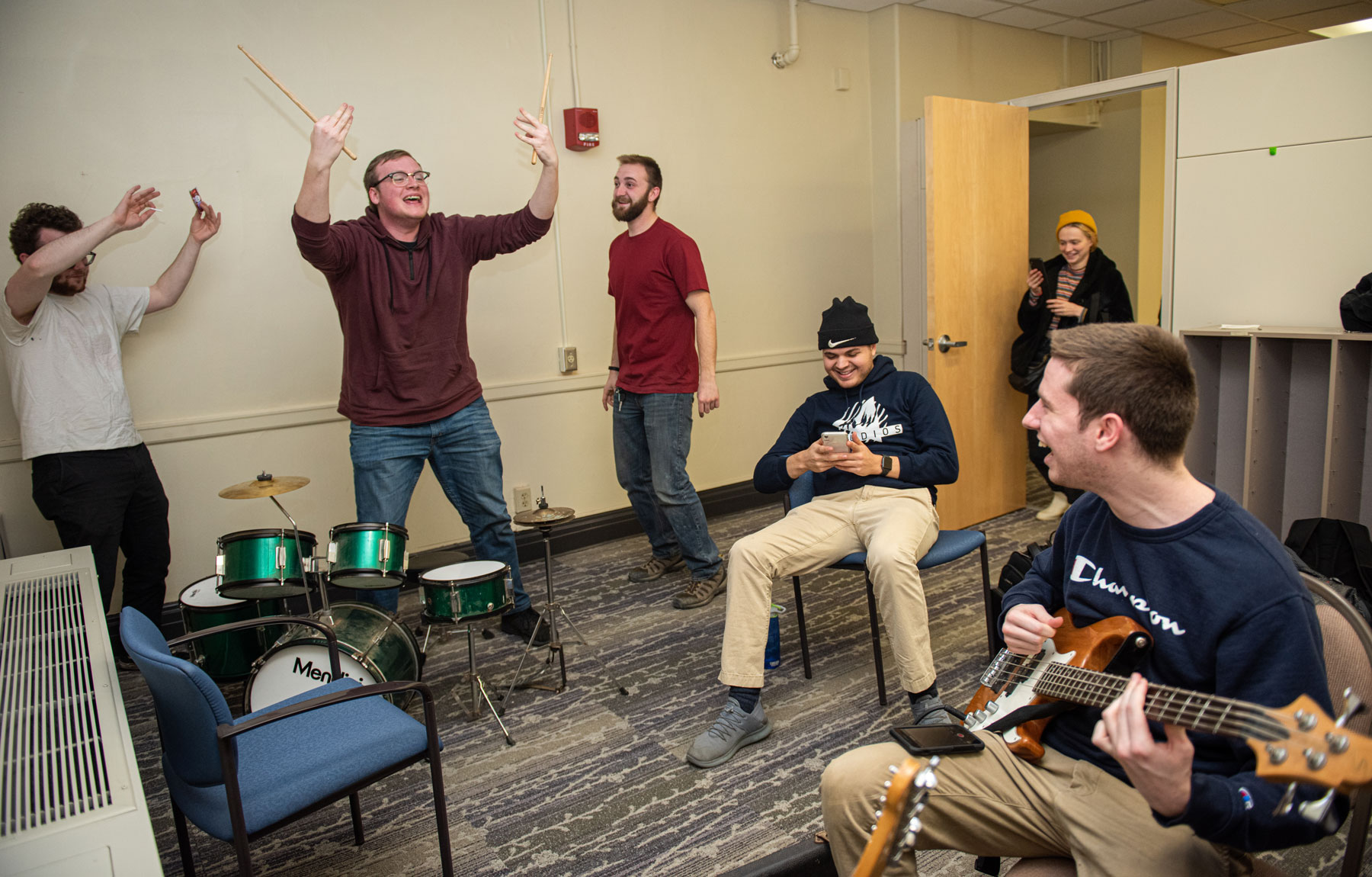 Friday, 9:06:44 p.m. | The moment that junior Collin Black, center, who directed the film and acted as L. Ron Tubbard, and his teammates thought of the song, "Make each other smile." The band performs the song in the final scene of the film. 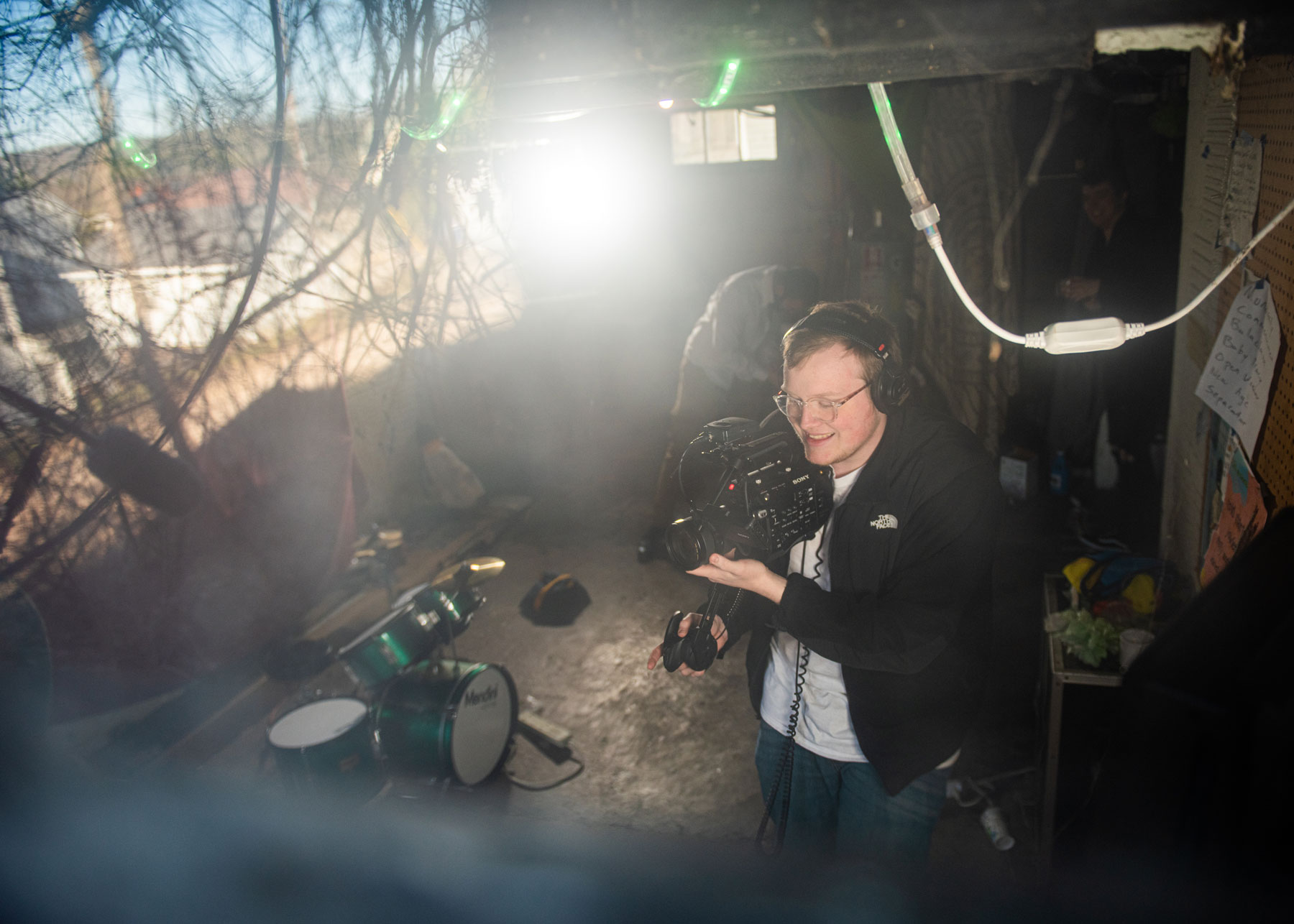 Saturday, 3:34:12 p.m. | Junior Collin Black, who also acted as the special effects coordinator, films a scene at a local home on Grosvenor Street in Athens, Ohio. This was where the fight scene in the video occurred. 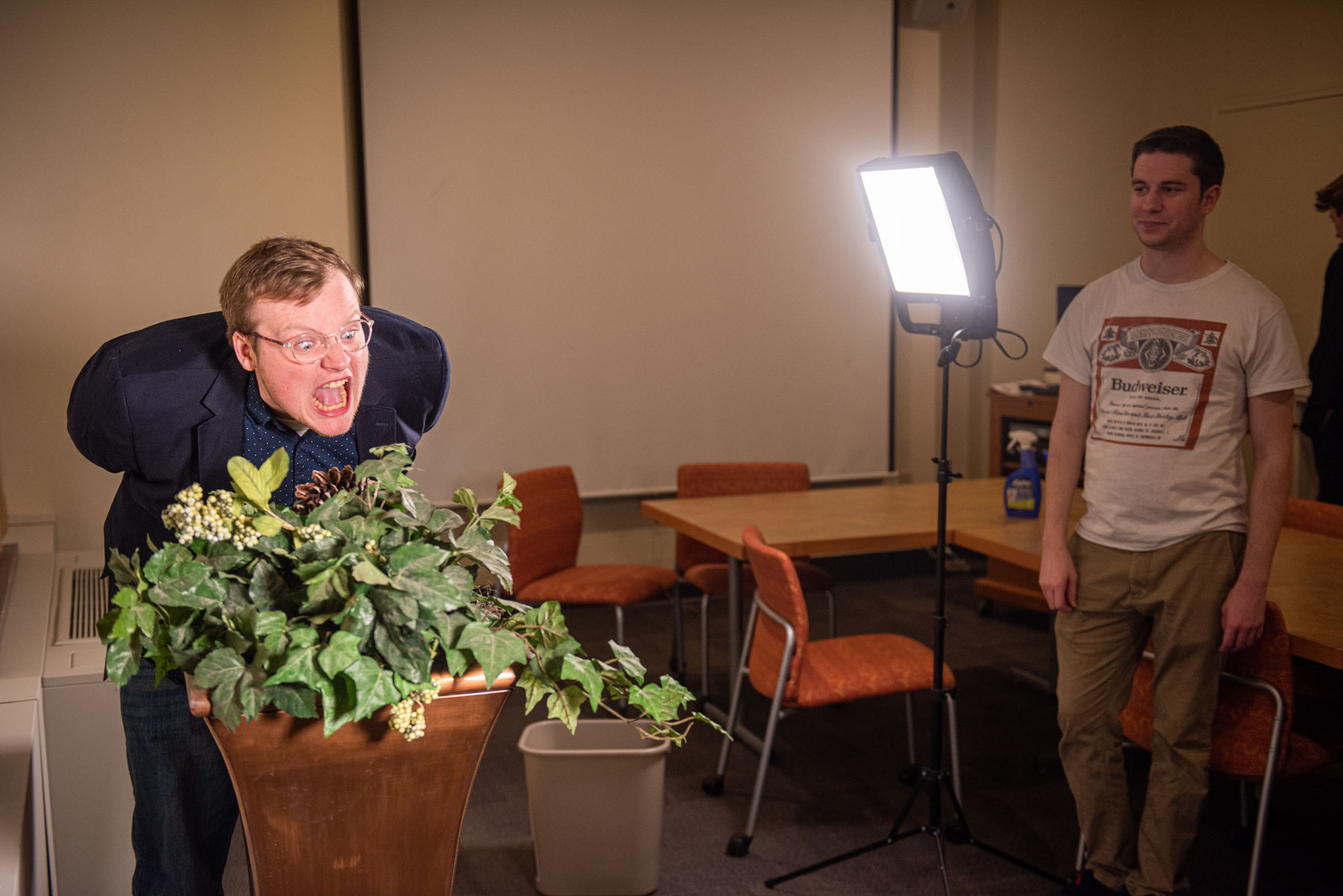 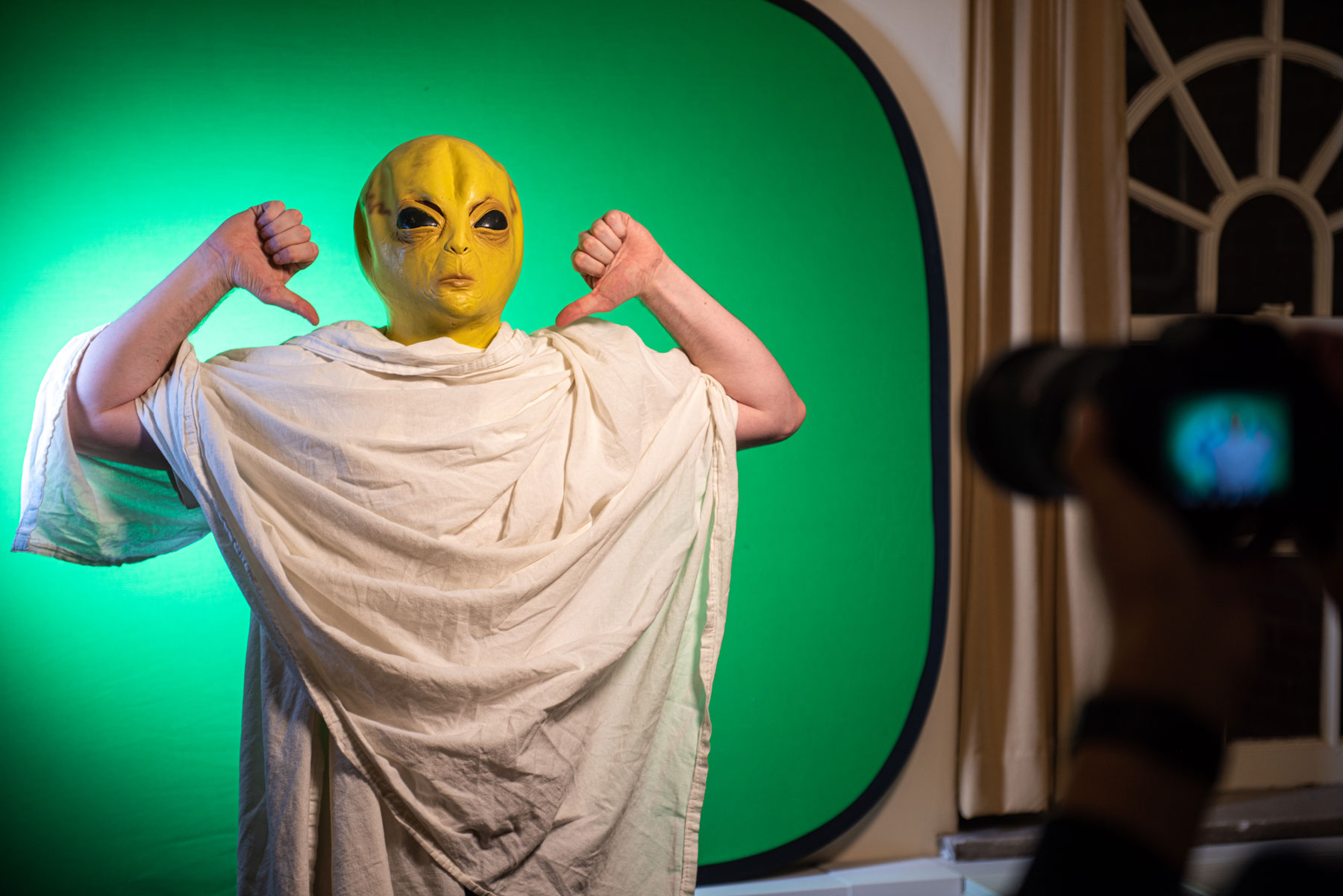 Saturday, 12:38:20 a.m. | Meet Derek, the "God" of the Church of Knowledgology. Derek, portrayed by senior Will Connolly, invites the band, named Synonyms of Science, to his planet at the end of the film. 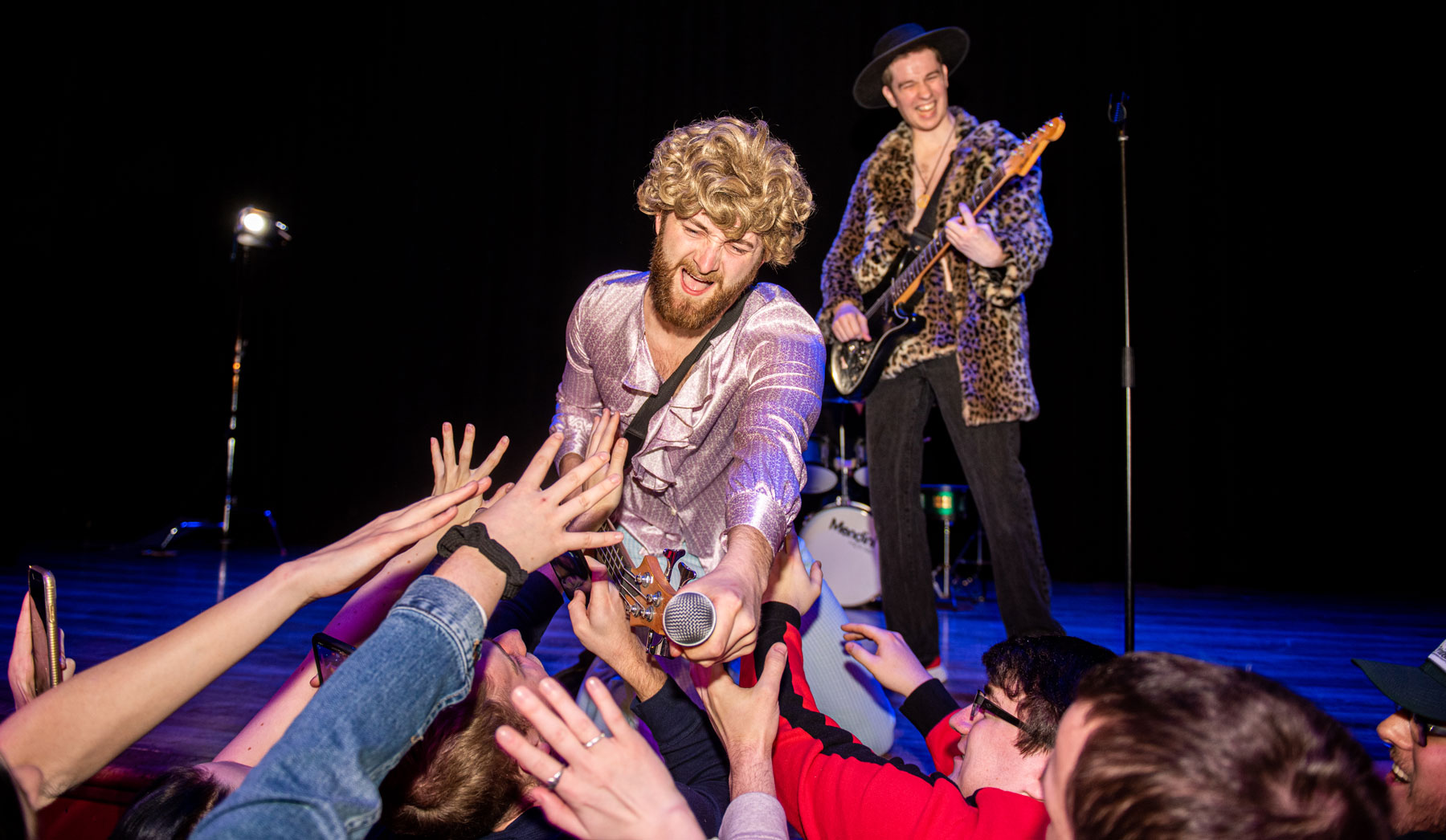 Saturday, 8:53:15 p.m. | Junior CJ Dawson, who acted as Creed in the film, is adored by his fans. The fans were portrayed by students at Ohio University who were recruited by Team Sad Face. 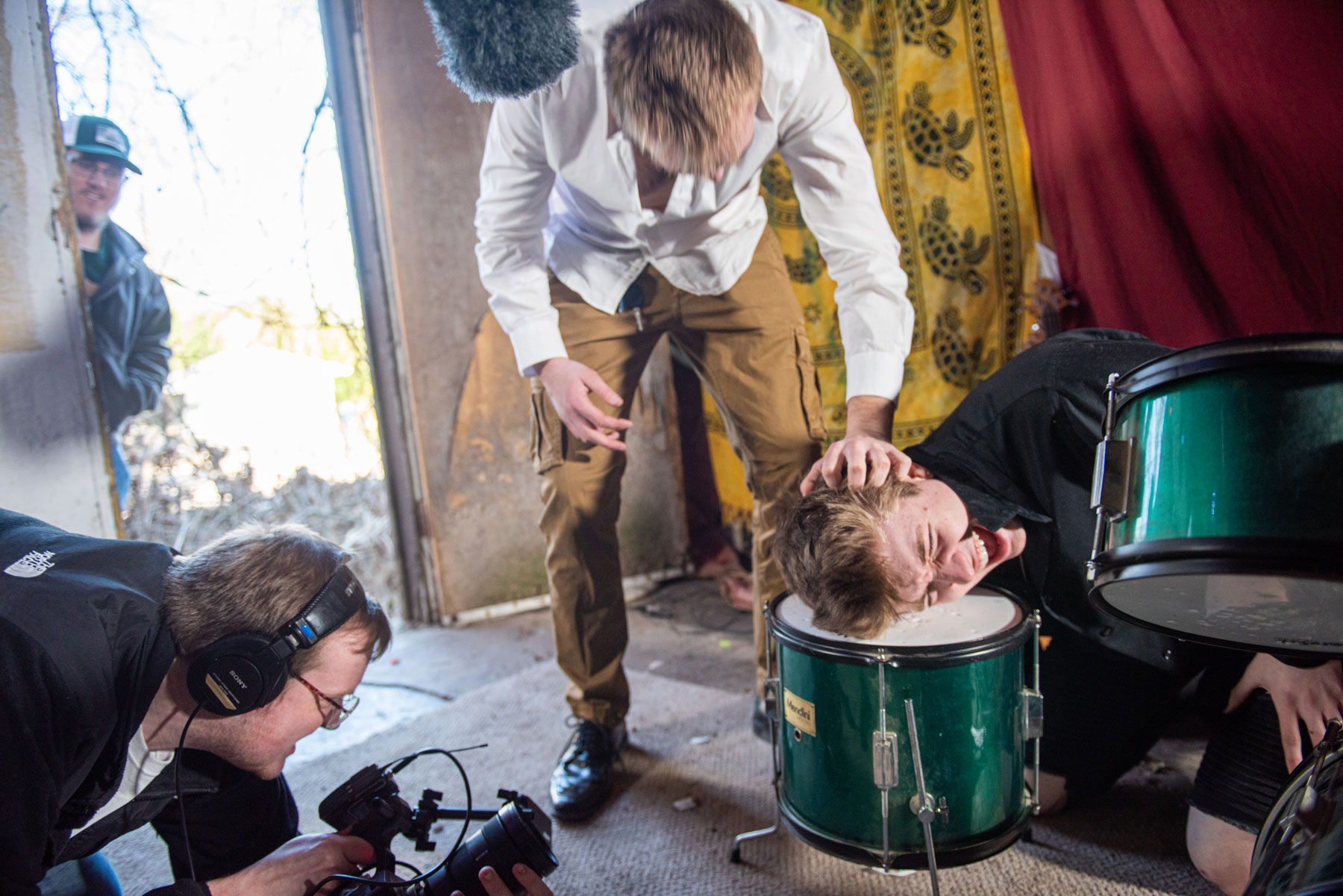 Saturday, 3:36:55 p.m. | Sophomore Hayden Johnson, who acted as Creed in the video, gets his head slammed into a drum set during the fight scene. 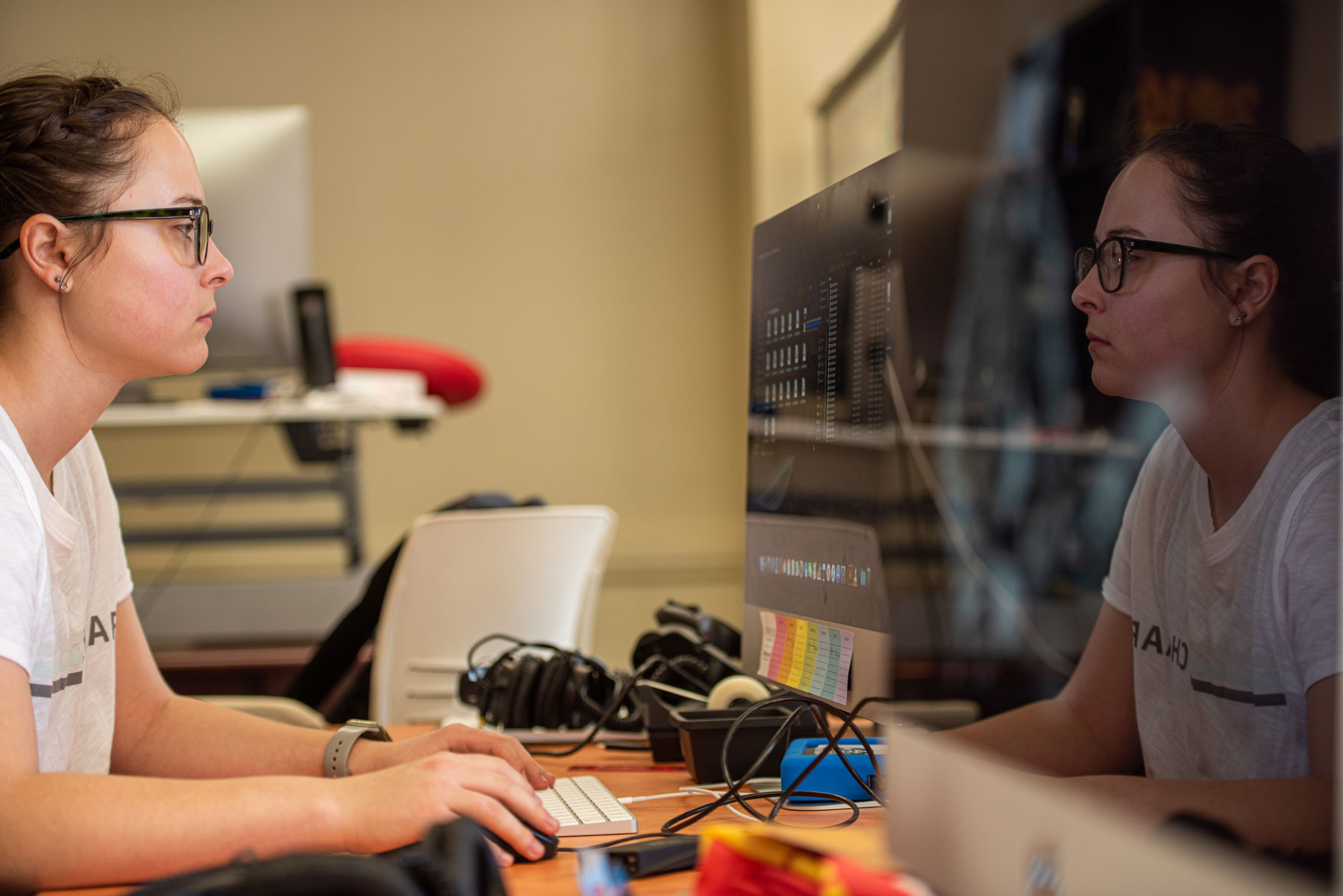 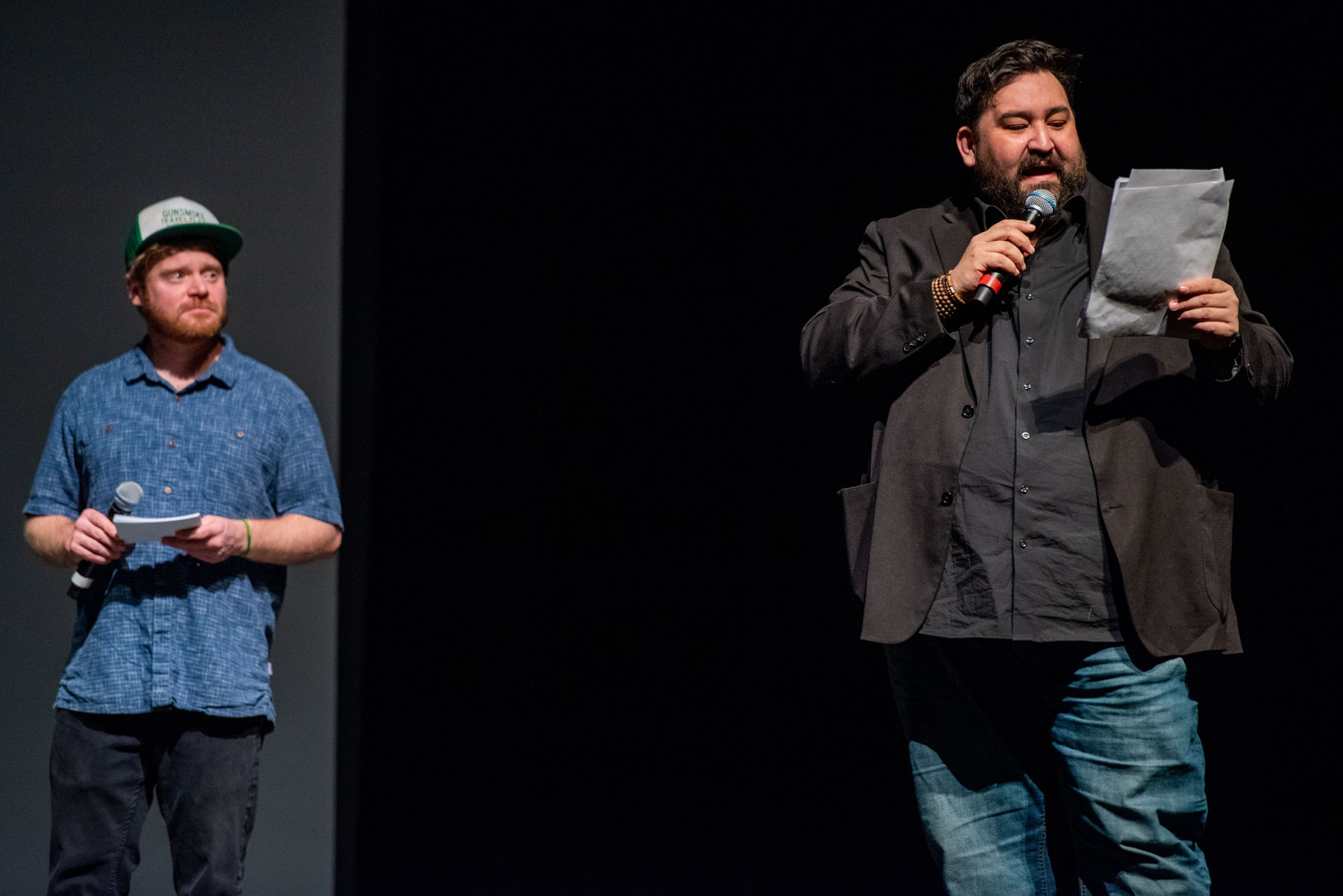 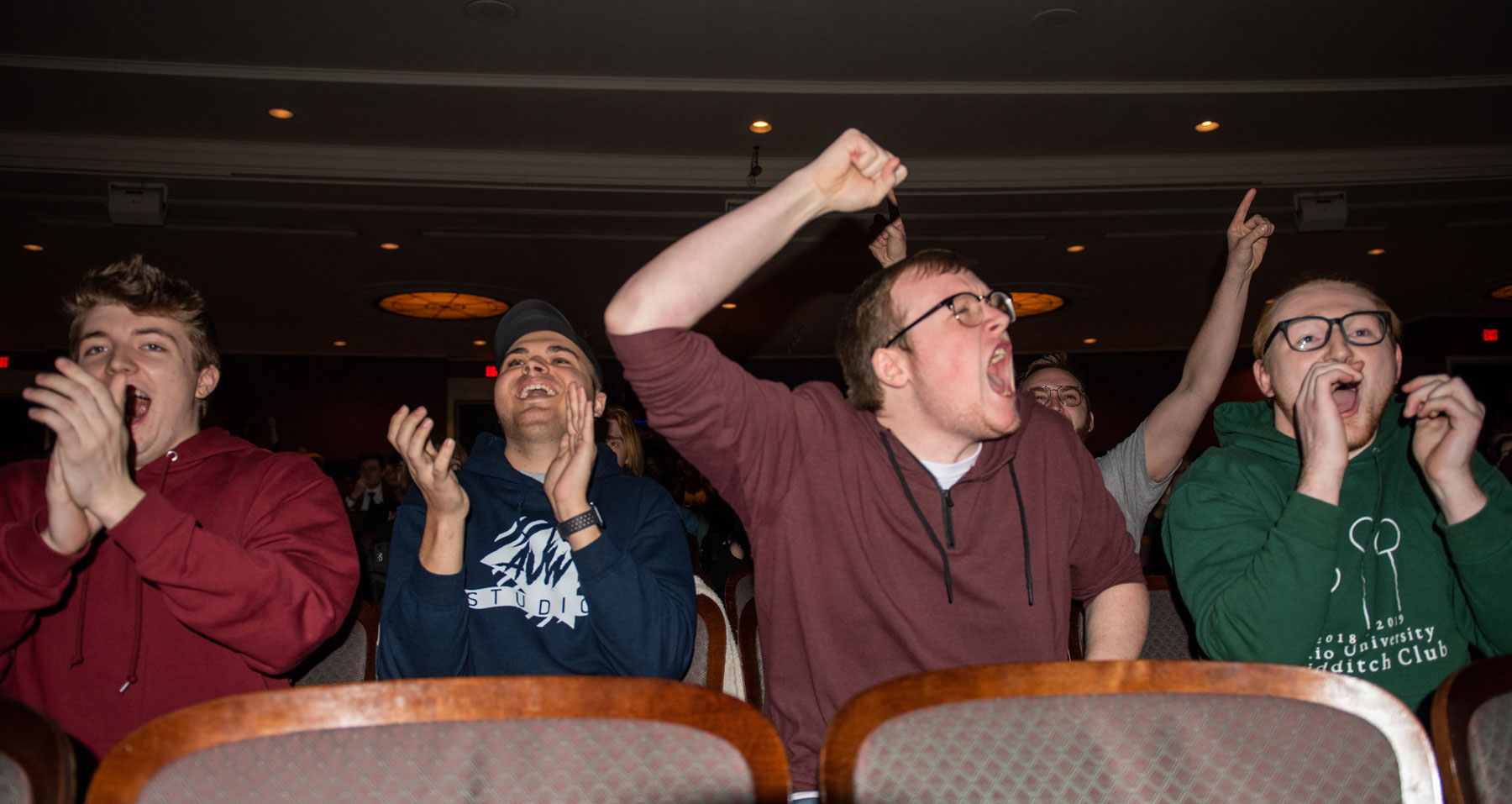 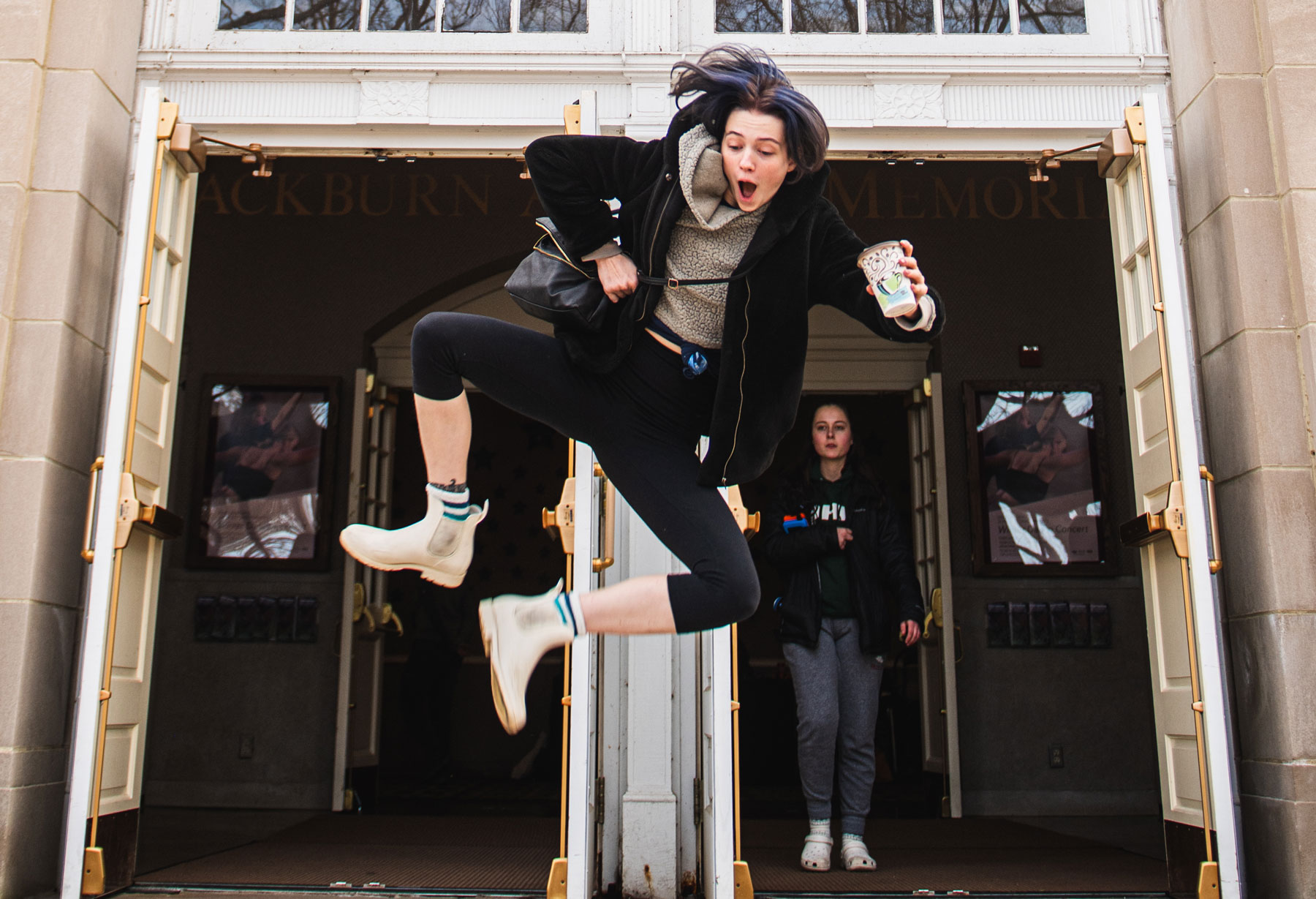 Sunday, 4:45:45 p.m. | Senior Beth Miller jumps with joy after turning in the hard drive with the final version of their film. A screening event was held at 6 p.m. on Sunday.