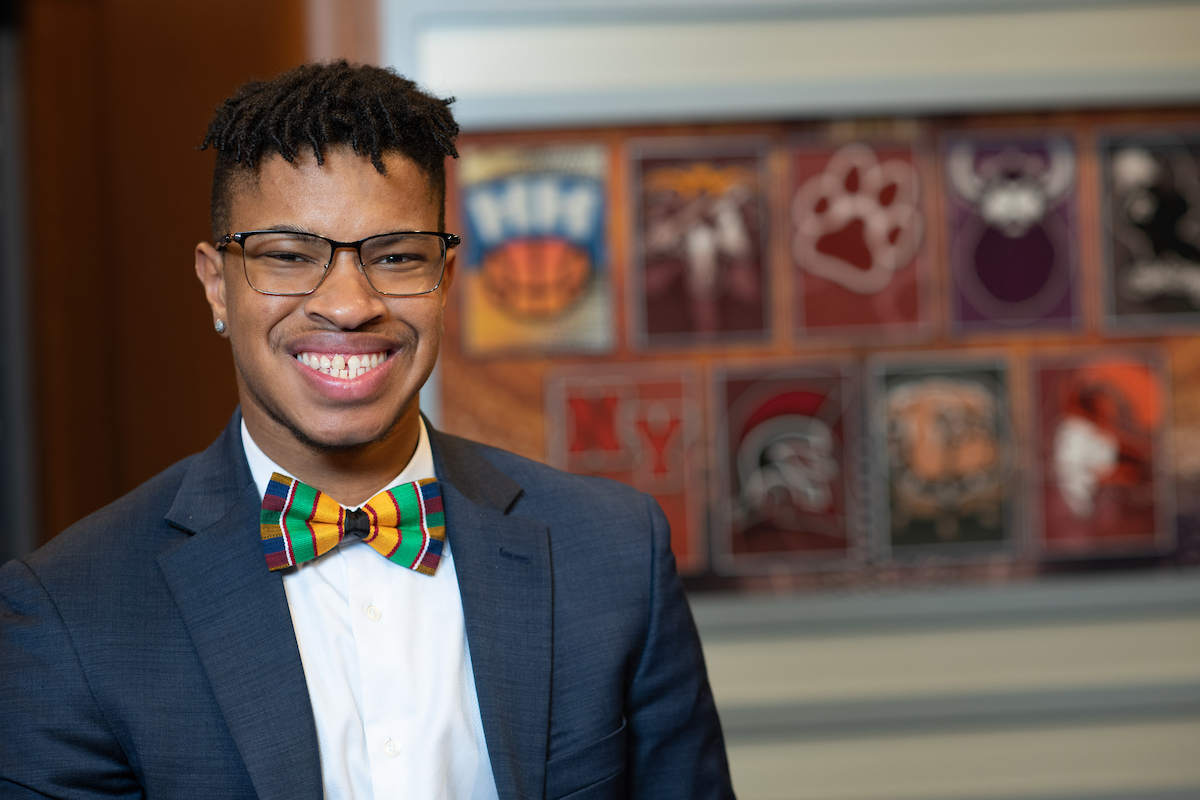 Ethan Sands wants to be someone that future black journalists look up to and reach out to for advice. He’s well on his way towards achieving that goal after being named one of 16 students from around the country selected for the Sports Journalism Institute (SJI).

The SJI is a prestigious program that has enhanced racial and gender diversity in sports media for more than 25 years. With the help of its partners and funders, SJI has added 350 women and minorities to the staffs of the nation’s sports media since its founding in 1992.

“I had mixed feelings when I was accepted,” said Sands, a Maryland native. “I felt qualified and ready for the opportunities to come, but I was also disappointed because I wasn’t the only person from OHIO to apply. So, it was difficult to see my name in the slideshow and know that I got in when he/she didn’t. I always want everyone around me to be successful, but that serves as motivation for me because I can show them the promise that students from OHIO have.”

As a part of the program, the 11 men and five women selected will attend a boot camp May 30 through June 7 at the Cronkite School of Journalism at Arizona State University. The boot camp will include daily sports checks, a friendly competition between the students that forces them to work at a reporter’s pace to keep up with national news that they could spin for a local angle.

“We will also get hands-on experience with the Arizona Diamondbacks (MLB) and Phoenix Mercury (WNBA) that will allow us to be in press conferences,” Sands said.

Following the intensive boot camp, the students will move on to internships around the country. Sands, an OHIO junior studying journalism, will be a sports reporter and writer at the Tallahassee Democrat, part of the USA Today Network. His internship will most likely entail working alongside the Florida State University teams, but also covering “anything asked” of him.

In order to be selected for SJI, students submit work samples, a transcript, a personal essay and letters of recommendation. WOUB News Editor-in-Chief Allison Hunter was one person to recommend Sands, who is a part-time sports and news multimedia journalist for the Athens-based public radio and television station WOUB Public Media. WOUB is a member station of both NPR and PBS and serves 55 counties throughout southeastern Ohio, northern West Virginia and eastern Kentucky with its broadcast signals.

“Ethan is involved in just about everything sports at WOUB, but it was the way he met and worked through the challenge of working as a news multimedia journalist this past summer that let me know that he is built to succeed in any situation,” Hunter explained. “There are times when aspiring sports journalists think reporting news stories will make their brain explode out of their ears. Ethan was one of them, but he worked through that mental block, took the feedback to heart, and went on to produce solid content for our radio, television and web audiences.”

Sands wears a few hats at WOUB: He’s a sports anchor working to become a news anchor; he’s the producer of the high school basketball TV show, “Hardwood Heroes;” and he’s a co-host of WOUB’s podcast, “The OUtlet.”

He’s also participated in OHIO’s Scripps in D.C. program, and was, and still is, involved with organizations and programs such as Gridiron Glory,Bobcat Showcase, Newswatch, Associated Press Sports Editors, Black Student Communications Caucus, Black Student Cultural Programming Board, and the National Association of Black Journalists. According to Sands, there’s an organization for everyone at Ohio University.

“If there’s not, then you can make it,” Sands said. “The power is in your hands, and if you have a dream, don’t let anybody tell you that you can’t do it, or that it’s too big. Go make it happen. To high school students who are interested in journalism, we need you. You are the next generation and if you are passionate about storytelling, this is one of the best places to do it. Ohio University is home to some of the most successful journalists in the business.”

Coming out of high school, Sands was looking for a university with a solid journalism program that could give him relevant internship and career experience as soon as possible. There’s no doubt Sands has capitalized on the opportunities available for students at OHIO, which is home to the nationally-recognized E.W. Scripps School of Journalism. The school’s director, Dr. Bob Stewart, said Sands “exudes confidence while maintaining a humble approach and a readiness to learn.”

Sands plans on graduating in 2021 and has high aspirations for what comes next. He wants to land a job as an anchor and reporter at NBC Sports Washington, moving on up to The Undefeated, and hopefully, ESPN.

“There are three things you need to be successful in this industry, especially sports,” he explained. “You need to be confident in yourself enough to be able to hear a ‘no’ and keep going; you need the ability to network and put yourself out there even if you aren’t qualified because all you need is one opportunity; and you need to have fun or enjoy what you do. This life is yours to live, and if you don’t enjoy it, then don’t waste your time doing it.”