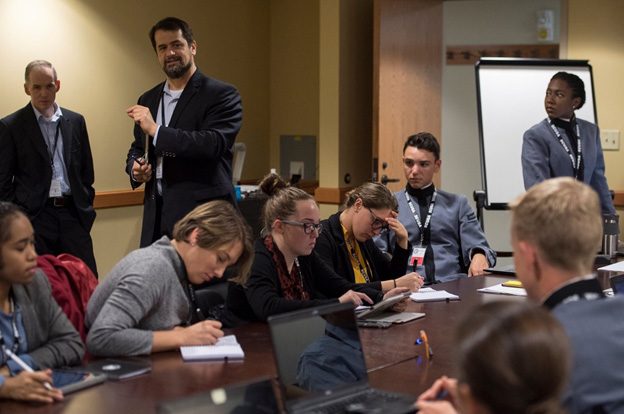 Kiersten Mitchell, third from left at the table, at U.S. Affairs conference at West Point.

Ohio University student Kiersten Mitchell '20 discovered that making foreign policy decisions is complicated by domestic polarization in a mock foreign policy exercise at the 71st Annual Student Conference on U.S. Affairs at the U.S. Military Academy at West Point in New York from Oct. 30 to Nov. 2.

The conference gives college students from across the country a rare opportunity to participate in discussions on foreign affairs. The theme of this year’s conference, “Advancing the National Interest – The Intersection of Domestic Politics and American Foreign Policy,” provided delegates the opportunity to reflect on the role of the United States in global cooperation. This year’s keynote address was given by current NATO Ambassador Kay Bailey Hutchison.

“Working with delegates from around the U.S. and some from around the globe was a surreal experience in itself. It wasn’t until later that I really took the time to look at where I was as well as witnessing the cadet life firsthand made the significance and mission of this conference even more clear,” said Mitchell, an undergraduate double majoring in political science pre-law and sociology-criminology. She is also pursuing the certificate in law, justice and culture and is secretary of the Political Science Majors Association and a Learning Community leader.

The conference bills itself as “the largest and oldest conference of its type” and an “important means through which we promote civil-military engagement among future leaders from around the world.”

Conference organizers divide delegates into thematic roundtables, each of which works on a mock policy proposal and presents its recommendations at the end of the meeting.

Mitchell noted that the policy drafting experience “showed me how complex policy making is, as it should be. Each time one of us had the ‘solution,’ the experts intervened and reminded us of some possible opposition or variables we weren’t yet considering. Thus, making said solution no longer feasible and we were onto the next,” she said.

“It wasn’t until we were in crunch time for our policy paper that we realized we had a topic that was much larger than having one solution, we created multiple solutions by outlining the major issues within domestic polarization. As we came to the conclusion that as a country, the U.S. needs to fix its issues domestically in order to operate internationally,” Mitchell said.

Mitchell participated in the Foreign Policy and Domestic Polarization roundtable, which was advised by Chief of Staff for Congressman Dean Phillips, Tim Bertocci and Skidmore College assistant professor of political science, Patrick Campbell.

“Both advisers facilitated our roundtable discussion tremendously. They helped us see the pros and cons within each idea we had as well as providing us with extra information within our topic,” Mitchell said.

Ohio University typically nominates one or two students for the SCUSA conference each November. Applications are due late August or early September. For the 2020 meeting, students majoring in political science should contact Dr. Andrew Ross for details. War and peace studies also sends one delegate, and interested war and peace majors should contact Dr. Nukhet Sandal.