OHIO goes beyond recognizing cultural diversity — we celebrate it 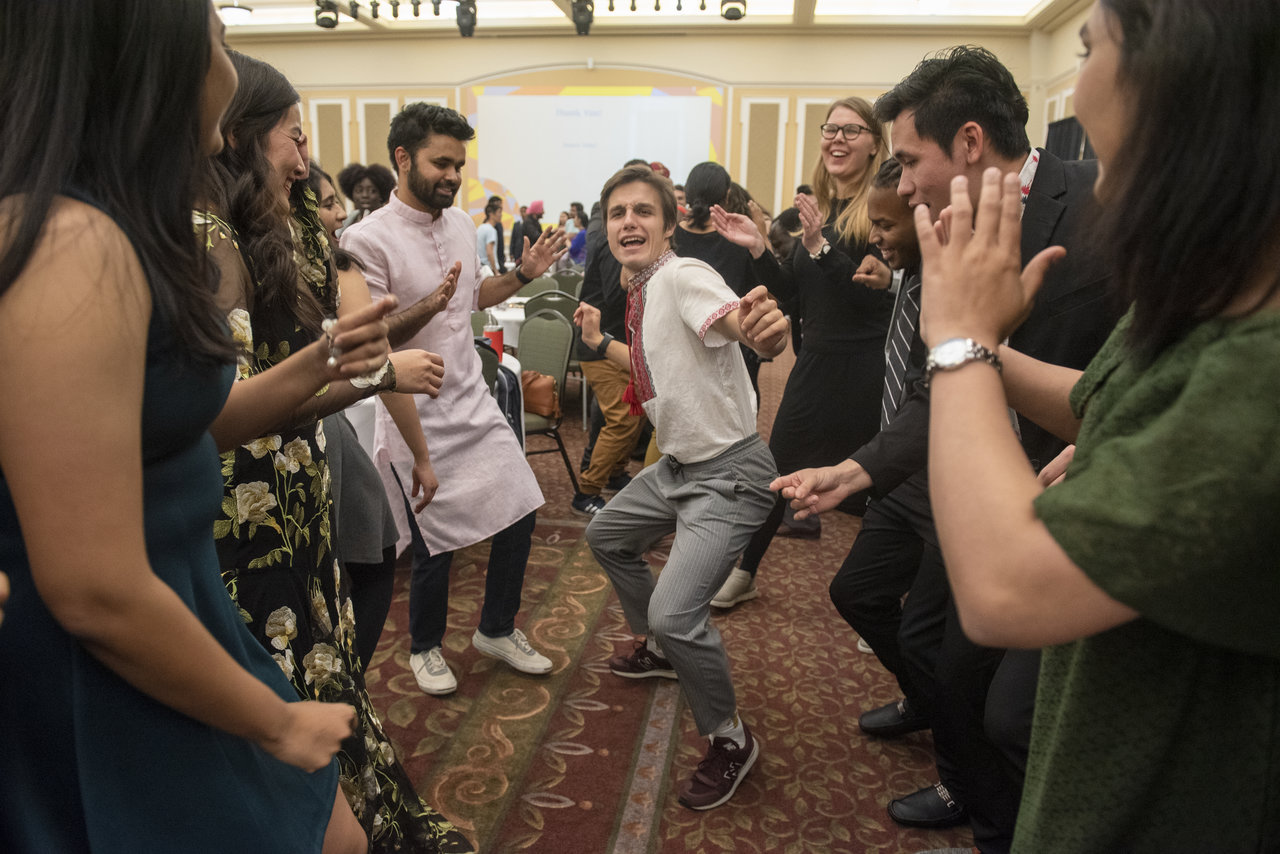 When students choose to make Ohio University their home away from home, that means a few things.

It means each day on their way to class, they can stroll around the best college town in the state of Ohio. It means when they’re not in class, they can explore the 21-mile bike path running through campus and Athens County. It means they will have the opportunity to study in some of the nation’s top-ranked academic programs, from engineering, to business, ceramics and journalism.

It also means they chose a university in the top 2 percent of quality of education globally. OHIO’s welcoming and inclusive environment not only prepares American-born students for a global environment, it attracts future leaders from abroad to study, learn and exchange experiences in the United States — and immerse themselves in the vibrant college town of Athens.

Last month, the University recognized International Education Week (IEW) with a slew of events aimed to acknowledge the benefits of international education and exchange worldwide, and celebrate the hundreds of international students at OHIO. Among those events was one of OHIO’s signature IEW extravaganzas: The International Dinner.

The International Dinner included food from around the world prepared by the International Student Union’s member organizations. While the attendees were enjoying a snack from one country, they were listening and watching a performance from another.

The evening included performances from OHIO’s incredibly talented international community, from a poetry reading, to a Nepali dance, to a velvety-smooth saxophone performance. It also included a Chinese traditional music performance by Chen Haotong and Zhou Chao. (*The Chinese typically state their family name first, and then their first name); and a Mozambican traditional dance by Carina Capitine.

Capitine, a graduate student in the Center for International Studies Communication & Development Studies program, is from Maputo, Mozambique, southeast Africa. Chen Haotong, a postdoctoral researcher in OHIO’s Edison Biotechnology institute, is from Liaoning Province in Northeast China; and Zhou Chao, a Ph.D. candidate in the School of Interdisciplinary Arts, is from Jiangxi Province in Southeast China.

The duo performed two songs during the International Dinner using a piano and an erhu (二胡), a two-stringed bowed musical instrument. They said the integration of Western and Eastern traditional instruments makes the songs cross-cultural.  The instrument can be traced back to proto-Mongolic instruments, which first appeared in China during the Tang Dynasty. The erhu can be made to imitate the sound of Chinese singing, birds and horses.

The two songs they performed, “Competing Horses” and “The Untamed,” were polar opposites. The first, vivid and joyful. The second, melancholy and nostalgic. Both songs are extremely popular in China.

Chen Haotong, who studies natural product biochemistry in her postdoc, has been in Athens since 2015. While she misses Liaoning, its food and her family, she’s grateful for her professors and colleagues at OHIO who have helped her learn how to better understand the world we live in from an international perspective.

She chose to study at OHIO because she was impressed by the research atmosphere of OHIO’s Edison Biotechnology Institute — and she’s felt welcomed not only at the University, but in the country itself.

“The U.S. has a tolerant environment,” she said. “I don’t think I need to change myself to fit in the U.S. culture. I live a lifestyle just like how I did in China, but I would like to learn more things here that I’m interested in, like art and cooking, and fuse them with Chinese traditions.”

Living in Athens since 2016, Zhou Chao is in her fourth-year of her Ph.D. program for the School of Interdisciplinary Arts in the scholar/artist track. The program requires candidates to complete both theoretical research and practical artistic production concurrently.  What led her to OHIO is its “outstanding and unique” Interdisciplinary Arts School, and the “exceptional academic research and diversity.”

As the only international student from Mozambique at Ohio University, Carina Capitine wanted to represent her home country. She took to the stage in Baker University Center Ballroom during the International Dinner wearing a bright orange, patterned capulana around her waist — a type of sarong worn primarily in Mozambique.

Capitine performed a sample of three types of dances found in Mozambique, the first one being Tufo. Of Arab origin, Tufo is a traditional dance performed mostly by women donned in bright capulanas, a natural face mask called Mussiro, and jewelry, while men play percussion. The celebratory dance involves movements of the upper body and is sometimes accompanied by jump roping. The other two dances were Zorre and Marrabenta.

Capitine was nervous but excited to perform, as she wanted to share part of her culture with the OHIO community. President of OHIO’s Fulbright Student Association, Capitine was placed at the University through the Fulbright Foreign Student Program.   She’s been in Athens a little more than a year and plans on graduating in May with her master’s degree from the Communication and Development Studies program.

“I was really happy because the program is 100 percent matched with what I wanted to do,” Capitine said. “I really enjoy how slow life is here in Athens. Because I was working before when I got my other degree, I was really looking forward to just being a student and Athens is a place that allows me to be focused on my studies. There aren’t a lot of distractions which is nice.”

It’s her first time away from home and she’s made the most of it. In her short time studying at OHIO she’s visited Colombia as a part of an academic exchange at Universidad del Norte, and she’s traveled to Chicago, Atlanta, Miami, Texas and Alabama. Along the way, she’s made sure to educate people about Mozambique, a coastal country in southeast Africa.

She said people in Mozambique are bright and welcoming so that’s how she approaches each of her interactions in Athens.

“I really try to talk as much as I can about my country, and I think that’s something that I got from being a Fulbright student. We try to make this not just an opportunity to come and get our master’s degrees but also to interact culturally,” she added. “I want to learn as much as I can about the U.S. culture and other cultures I have contact with. I also want people to know a little bit more about my country also.”

Capitine has had a few people ask her about the wildlife in Mozambique. That’s always an enjoyable question.

“I think it’s funny because I’ve seen more wild animals here in Athens than I would see in Maputo — deer. For me, that’s a wild animal,” she laughed.

Capitine said she recommends Ohio University to international students looking for strong academic opportunities or students who are seeking a culturally diverse university to study at.

“I really like the mix of people that you find here, I don’t think many schools have the same culturally diverse environment as we have here,” she explained. “Not only culturally diverse but we are welcomed with our differences. Having a week like International Education Week, something that is so central and so big and is part of the university life, I really treasure that. We’re all really curious about each other and very open to each other.”