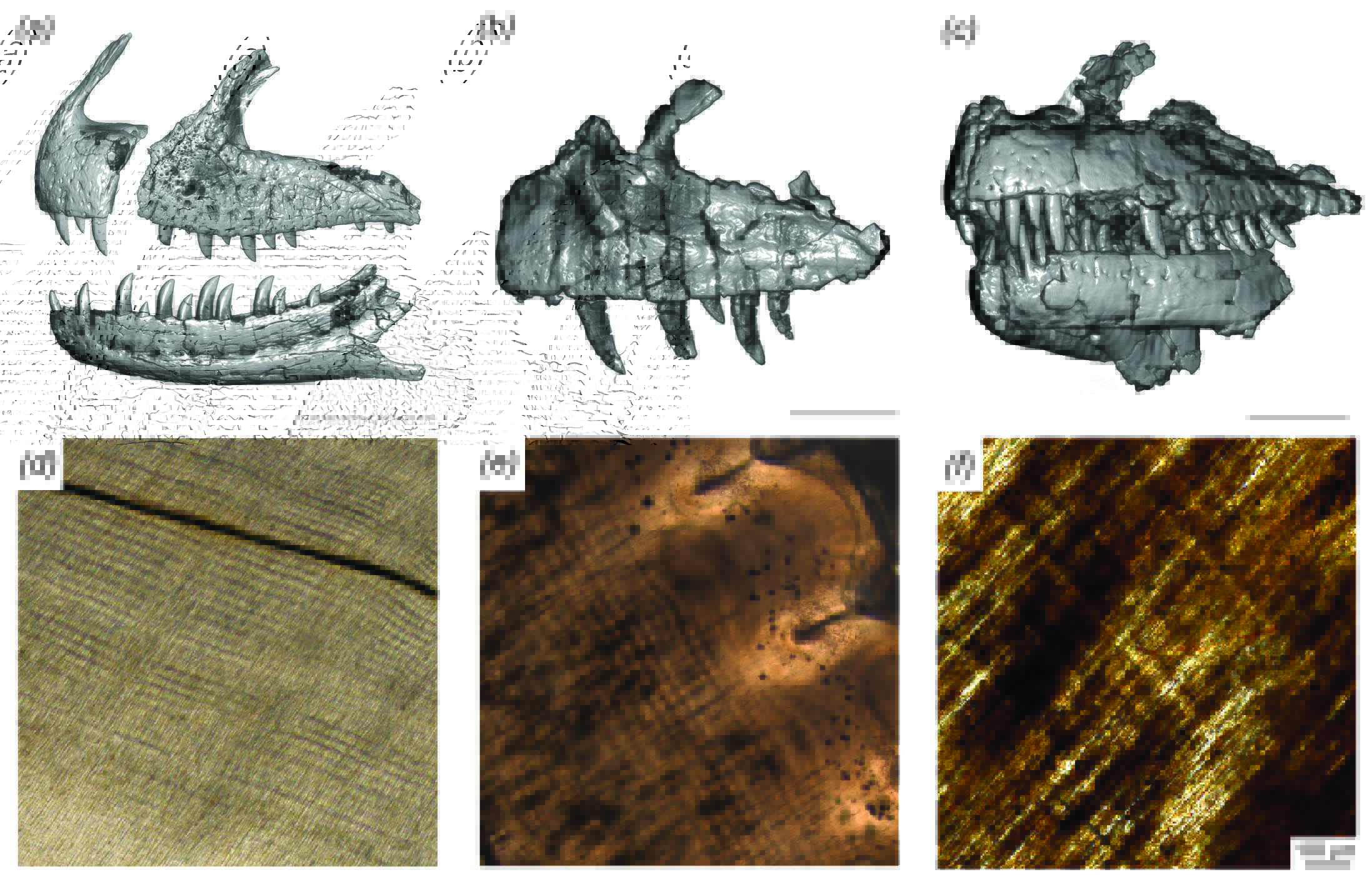 PLOS ONE CT scan-generated models of the jaws of Majungasaurus (left), Ceratosaurus (center) and Allosaurus (right), with microscopic views of the interior of their teeth below each model. Stripes running from upper left to lower right in each microscopic image are daily deposited incremental lines, which allow the amount of time it took for a tooth to grow to be reconstructed.

A meat-eating dinosaur species (Majungasaurus) that lived in Madagascar some 70 million years ago replaced all its teeth every couple of months or so, as reported in a new study published today in the open-access journal PLoS ONE, surprising even the researchers.

In fact, Majungasaurus grew new teeth roughly two to thirteen times faster than those of other carnivorous dinosaurs, says paper lead-author Michael D. D’Emic, an assistant professor of biology at Adelphi University. Majungasaurus would form a new tooth in each socket approximately every two months.

“This meant they were wearing down on their teeth quickly, possibly because they were gnawing on bones,” D’Emic said. “There is independent evidence for this in the form of scratches and gouges that match the spacing and size of their teeth on a variety of bones – bones from animals that would have been their prey.” Importantly, the study also examined two other species of predatory dinosaur (Allosaurus and Ceratosaurus), providing an opportunity to consider tooth growth patterns at a broader scale.

Some animals today, too, will gnaw on bones, including rodents, D’Emic said. It’s a way for them to ingest certain nutrients. It also requires exceptionally strong teeth – but Majungasaurus did not have those.

“That’s our working hypothesis for why they had such elevated rates of replacement,” D’Emic said. The rapid-fire tooth growth puts Majungasaurus in same league with sharks and big, herbivorous dinosaurs, he adds.

In collaboration with Patrick O’Connor, professor of anatomy at Ohio University, D’Emic used a collection of isolated fossil teeth to examine microscopic growth lines in the teeth. These growth lines are similar to tree rings, but instead of being deposited once a year, they are deposited daily. At the same, the team used computerized tomography (CT) on intact jaws to visualize unerupted teeth growing deep inside the bones. This allowed them to estimate tooth-replacement rates in a large number of individual jaws so they could cross-check their results.

The time-consuming process would not have been possible without the involvement of students at both OHIO and Adelphi. Graduate students Thomas Pascucci (Adelphi University) and Eric Lund (Ohio University) played important roles as part of the research team, serving to conduct both microscopic and digital computed tomography analyses at the heart of the study.

“The ability to interface with colleagues across the state, country, or planet, particularly when we can include students in different parts of the research process, is a game changer when we consider collaborative research in the 21st Century,” O’Connor stated. “This project addresses yet another aspect of the biology of Majungasaurus, and predatory dinosaurs more generally,” he added, “heralding the next phase of research based on recent field discoveries.”

This work was supported in part by the US National Science Foundation, Division of Earth Sciences (EAR_1525915, EAR_1664432) in a project entitled “Cretaceous vertebrates from Madagascar: A Window into the biogeographic and plate tectonic activity history of Gondwana.”