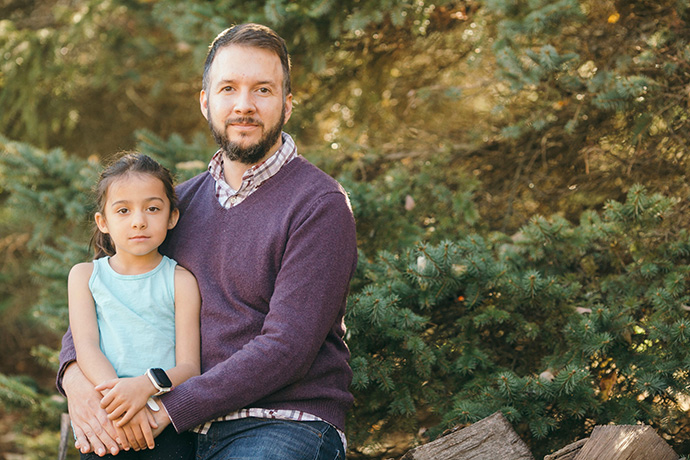 Graham Smith of Dublin, Ohio, is neither a medical clinician nor a research scientist. But when the Heritage College of Osteopathic Medicine hosted experts from around the world for the third annual International Symposium on Growth Hormone and Metabolism in June, he was there, talking shop with them.

Smith had learned about the upcoming symposium from Jennifer Klein, Ohio University’s assistant dean for persistence and student success – and Smith’s sister. He showed up hoping to learn whatever top scientists and clinicians could tell him about the health prospects of his 6-year-old daughter, Hadley, who was born with a growth hormone (GH) deficiency. Since her condition was diagnosed three years ago, she has taken a daily injection of human GH to compensate for her body’s inability to produce the hormone.

“I really had three purposes,” Smith recalled. “I had specific questions about the cause of growth hormone deficiency, I wanted to see where the research was headed, and I wanted to see what my daughter’s outlook was as an adult.”

Though the research presentations at the gathering were by and for experts, Smith said he was made to feel welcome and came away with valuable new insights into Hadley’s condition and what her future may hold.

“I did learn a good deal about my daughter’s outlook as an adult,” he said. “Learning about the complex interactions that happen within the endocrine system was extremely useful. And then being able to tie all of that into her long-term outlook was very helpful, and it educated me in being better able to talk to her physicians.”

John Kopchick, Ph.D., was one of the symposium’s main organizers. Kopchick, who holds the Milton and Lawrence H. Goll Eminent Scholar Endowed Professorship of Molecular and Cellular Biology at the Heritage College, said he was glad Smith was able to attend and pick the brains of some of the world’s premier GH experts.

“I had not met Graham before the symposium,” Kopchick said. “He contacted me, asking if he could come, and I said, ‘Absolutely, sure!’ I was really impressed that he stayed, he learned. He was able to learn information on up-to-date issues that perhaps a normal family doctor or endocrinologist, whoever treats his daughter, might not have. Because the material presented was new and as good as it gets.”

For example, Kopchick said, Smith learned that longitudinal studies have found no indication that injections such as those his daughter is taking can cause cancer, reproductive problems or mental health issues. Other good news, he said, is that drugs now being developed may in the near future make it possible for children with Hadley’s condition to take their shots less often.

“The companies have formulated growth hormone differently, which they’re trying in patients to administer twice a week, once a week, even once a month,” Kopchick explained. “None of those have been approved yet, but that’s coming. No one likes needles, especially children. So if instead of once a day you could do it once every two weeks, that would be great.”

For his part, Smith said he was impressed not only by how responsive the symposium participants were, but how engaged they are in the work they’re doing.

“Absolutely! They were friendly and genuinely excited,” he said. “I didn’t meet a single person who seemed to just be, you know, punching in and out. People were genuinely enthusiastic about their research and their work, and that was comforting to see.”

Klein called her brother’s involvement in the symposium a wonderful example of how the University and its medical college turn research findings into human benefits.

“Intellectual pursuit here makes concrete changes in people’s lives and in their quality of life,” she said. “And that’s what I witnessed.”