Symposium shows off collaborative medical research at its best 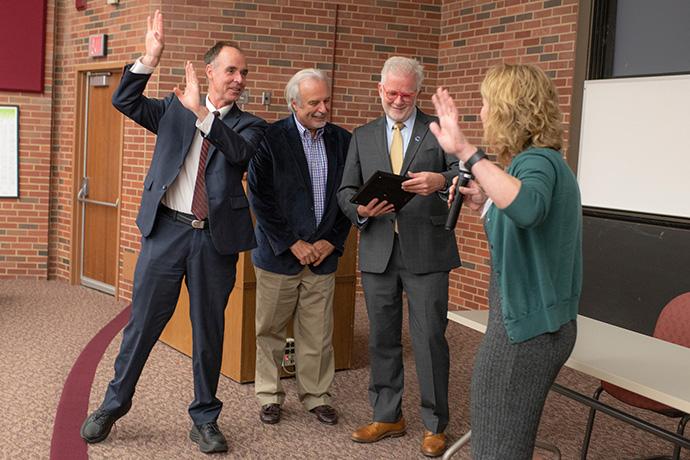 More than 100 people took part June 12 in the third annual International Symposium on Growth Hormone and Metabolism at the Ohio University Heritage College of Osteopathic Medicine. The gathering brought together scientific experts from the college and around the world to discuss new research on growth hormone (GH) and its use in treating conditions such as obesity, diabetes and acromegaly.

Featuring faculty and student presenters from HCOM and Ohio University’s Edison Biotechnology Institute (EBI), as well as speakers from university hospitals in Denmark, The Netherlands and Brazil, the symposium embodied the kind of collaboration across international and disciplinary borders that leaders of the university and medical school see as key to further advancements in health research and clinical care.

“By attending today’s symposium, you have made a conscious decision to surround yourself with a vibrant network of individuals who will challenge you and provide you with new perspectives,” Ohio University President M. Duane Nellis, Ph.D., told the participants. “That’s a critical component of innovation, and I think it’s a critical component of higher education today.” Nellis said the symposium highlights “how important these global connections are in advancing our discoveries.”

Ken Johnson, D.O., Heritage College executive dean and OHIO chief medical affairs officer, said that as a family medicine physician by training, he was excited to listen in on the interplay among top clinicians and researchers as they shared information and asked each other questions.

“I was just so impressed with the science and the fellowship and the discovery going on here today,” Johnson said. “I learned a lot – and I also couldn’t believe how much I had forgotten!”

The symposium is partly the product of an ongoing collaboration between Heritage College and EBI basic scientists and physician scientists from Europe and Brazil.  Among other areas of GH research, these groups  have joined forces to work out the many implications of the seminal GH research that was done in the early 1990s by scientists led by John Kopchick, Ph.D., holder of the Milton and Lawrence H. Goll Eminent Scholar Endowed Professorship of Molecular and Cellular Biology at the Heritage College.

This research led to the discovery of pegvisomant, a drug that inhibits the effect of GH in humans, which came as a godsend to many patients suffering from acromegaly, a chronic disease causing excessive organ and bone growth. In addition to earning Ohio University tens of millions of dollars in drug royalties, the research has opened multiple avenues of GH research in areas beyond acromegaly.

Johnson praised Kopchick for his ongoing contributions to patient health and to the college’s research mission. “His work, and the millions that it has earned for Ohio University, has continued to give back in so many different ways for our students and for our faculty, and has opened up many new pathways for us in thinking about obesity, diabetes, cancer and aging,” Johnson said.

Symposium keynote speaker A.J. van der Lely, M.D., Ph.D., is chief and professor of clinical endocrinology in the department of medicine, endocrinology section, of Erasmus Medical Center in The Netherlands. He said there is continual interaction between clinical work at Erasmus, where physicians use pegvisomant to treat acromegaly patients, and research done at the Heritage College, which suggests new treatment methods and drug combinations for clinicians to try.

“With this data from the lab and our data from the clinic, we can start to collaborate on new actions of growth hormone and the growth hormone - insulin system in cell tissues as well as in humans,” van der Lely said. For acromegaly patients, he said, this collaboration has meant “dramatic improvement. It’s fair to say now that there is almost no acromegaly patient whose condition cannot be controlled by a combination of drugs or one drug alone.”

Looking at growth hormone from many angles

Presentations at the symposium were grouped thematically, with a session focusing on GH and lipolysis (fat burning); one on GH therapy; one on GH’s influence on specific tissues of the body; and one on GH and acromegaly. Clearly, Kopchick suggested, the Heritage College is playing a key role in an important research network whose work was displayed at the symposium.

In the area of GH and its effect on fat, for example, he said, “right here, at Ohio University Heritage College of Osteopathic Medicine, truly we have in this room the leaders on the action of growth hormone on adipose tissue. There are others who study it, but this collection is as good as it gets.”

Kopchick said GH research has held a consistent fascination for him, as the hormone’s effects have implications for so many metabolic conditions. “It affects the extremes of metabolism. That’s my passion,” he explained. Best of all, he suggested, is knowing how much suffering has been relieved as a result of GH research.

“What’s really important is the effect on the patients,” he said. “It’s humbling. It gives me chills.”

The symposium was capped by van der Lely’s keynote remarks, given as the John J. Kopchick Distinguished Lecture for 2019. Last year, the college announced it was creating the lecture in honor of Kopchick’s love of learning and his impact on translational research throughout the world.

The symposium took place in Irvine Hall in Athens. It was sponsored by the Heritage College, Genus Lifesciences and Pfizer, as well a number of entities within Ohio University.