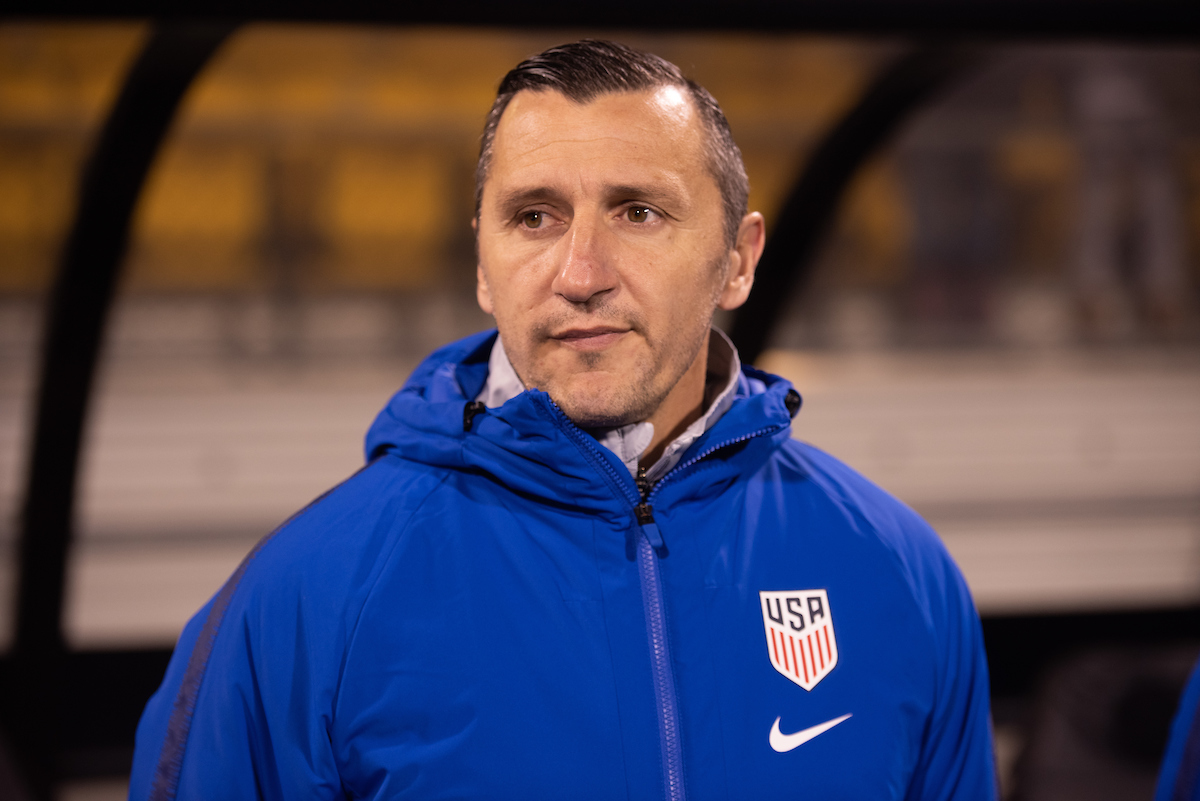 Ben Siegel The U.S. Women's National Team's new head coach, Vlatko Andonovski, is an alum of Ohio University's master's in soccer coaching education program. Andonovski led the US team to a a 3-2 victory against Sweden during his first game as head on Nov. 7 in Columbus, Ohio.

Some of Ohio University’s coaching education alumni have pursued careers as youth and high school athletic coaches. Many of them are club coaches. And, one of them just became the head coach of the best women’s soccer team in the world.

U.S. Soccer recently announced that Vlatko Andonovski, an alumnus of Ohio University’s coaching education program through The Patton College of Education, has been named the ninth head coach for the U.S. Women’s National Team (USWNT). At age 43, he is also the third-youngest head coach in the team’s history.

"We are very proud to have Vlatko Andonovski representing Ohio University as an alumnus, and now also representing the United States as the head coach of our U.S. Women's National Soccer Team," President M. Duane Nellis said.

“I am thankful for the education that I got from Ohio University,” Andonovski said. “I am thankful for the faculty who challenged me in so many different ways and inspired me to be the best version of myself. The knowledge I acquired at OHIO is something that I have used in my work and will continue using throughout my career.”

The coaching education program, which can be pursued on-campus or online, provides students with cutting-edge information and practical experience to pursue a coaching career in youth sports, interscholastic or intercollegiate athletics and Olympic or professional sports.

“As a part of our coaching education program, graduates are equipped with the technical and professional skills important to maximize individual and team performance, ensuring a lasting coaching career,” said Patton College Dean Renée A. Middleton. “Vlatko’s appointment as head coach of the number one women’s soccer team in the world reaffirms the excellent faculty we have in place to provide a unique, transformative and accessible learning experience.”

Soccer is the world’s most popular sport and the aspects of the game are constantly evolving, according to Dr. David Carr, associate professor and coordinator of OHIO’s graduate soccer coaching education program.

He said OHIO’s faculty are experienced coaches at multiple levels of the game, are accomplished coaching educators and are fully immersed in the latest concepts that coaches need to know.

“We believe in our curriculum, our athlete-centered approach to coaching and in our world-class faculty. We have current and former students who are coaching the game at every level,” Dr. Carr said. “Each student has personal and professional goals, and we work closely with everyone to help these goals become reality.  Some coaches are working at the youth level as a coach or director of coaching for a club. Some are dedicated high school coaches, while many seek to coach at the college level.”

Stephanie Savino, a current student in the soccer coaching education program who lives in New York, said she was “beyond excited” to hear that Andonovski is an alumnus of the same program she’s in now.

She said she feels incredibly lucky to be connected to Andonovski through her education at Ohio University.

“It is great to see an alum in this role and to think, I too, can be in that position one day,” she said. “His current and former players talk about what a wonderful person he is – and I find that to be a beautiful thing and a tribute to his educational background. We coach not only to develop talent but to inspire people around us. We are charged with encouraging and motivating people to perform better on the pitch but to also be great people off the pitch. His current and former players recognize his ability to coach but also his ability to push them beyond their soccer performance, and that I admire whole-heartedly.”

Savino said OHIO’s soccer coaching education program opened her eyes to the many techniques coaches can use to develop talent and the ways they can inspire athletes to push beyond their personal lives.

“The program has touched on technology, player development, the benefits of research, and my current class, psychology of coaching,” she explained. “It provides a 360°-degree view on coaching and for that, I highly recommend it.  Additionally, the relationships you form with cohort members is unique. I feel lucky to share personal coaching stories with others that are right alongside me, despite the miles that separate us.”

The current OHIO student said she is genuinely excited for Andonovski and his new role, and that same sentiment was echoed by Dr. Carr. He said Andonovski is exceptionally well-qualified for this new challenge.

According to U.S. Soccer, Andonovski comes to the program after serving as head coach during all seven seasons of the National Women’s Soccer League (NWSL), a stint which included two championships with FC Kansas City. He spent five seasons with FC Kansas City and the last two with Reign FC. He was twice named NWSL Coach of the Year, in 2013 and again in 2019.

A native of North Macedonia, Andonovski is a former professional player who played six seasons for clubs in the Macedonian Football League. He came to the U.S. in 2000 when he signed with the Wichita Wings of the National Professional Soccer League and later played with the Kansas City Comets, California Cougars and Philadelphia Kixx of the Major Indoor Soccer League (MISL). He was a two-time MISL All-Star.

“He was already an accomplished player and coach, but we are excited that one of our graduates has risen to become the head coach of the best women’s soccer team in the world,” said Dr. Carr. “It was a pleasure to have Vlatko as a part of our graduate program in coaching education and we wish him all the best.”

In a public social media post by USWNT, some women on the team praised Andonovski’s coaching abilities. Soccer star Megan Rapinoe said Andonovski has a “unique ability to really get the best out of every player and meet them where they’re at.”

“And then his tactical flexibility and knowledge is tremendous,” Rapinoe added.

Andonovski will begin the job immediately as he chooses a roster and prepares for the USA’s final two games of 2019 — against Sweden on Nov. 7 in Columbus, Ohio; and Costa Rica on Nov. 10 in Jacksonville, Florida. Dr. Carr and other OHIO faculty attended his first game in Columbus in a show of support for the former Bobcat.

Andonovski’s first major competition will come during the Concacaf Women’s Olympic Qualifying Tournament set to take place at the end of January and beginning of February 2020.

“It’s a huge honor, and I’m very excited to get started with this group of players and staff as we work towards continued success for this program,” Andonovski stated in a press release. “All of the talented coaches and players that have come before have built a legendary tradition of excellence, and I’m committed to working very hard to continue to move this program forward.”