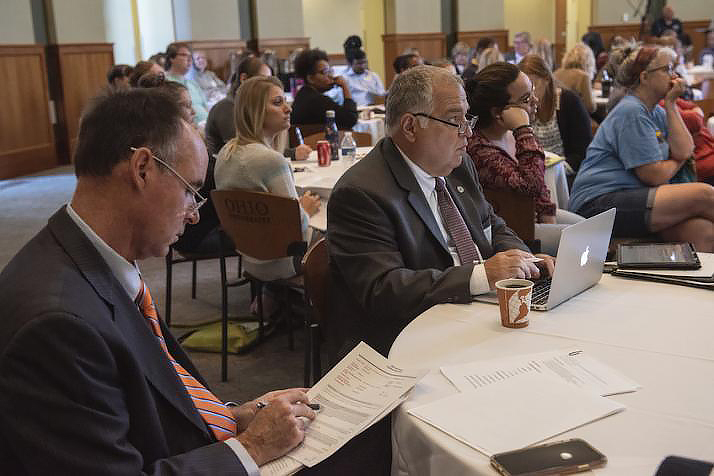 CHSP Dean Randy Leite (center on computer) at the symposium

When Ohio University President M. Duane Nellis provided opening remarks during the University’s Community Symposium on Opioid Interventions, he not only highlighted the importance of the inaugural event, he also made clear OHIO’s commitment to helping solve the state’s opioid epidemic.

The symposium, held Friday, Oct. 4, in the Margaret M. Walter Hall Rotunda on OHIO’s Athens Campus, was part of OHIO’s continuing effort to combat the state’s opioid epidemic by providing experts and resources as well as creating partnerships with local and state leaders.

“A recent Ohio University study revealed that more than one million years of life were lost in Ohio from overdose deaths between Jan. 1, 2009, and Dec. 31, 2018. This symposium represents a collection of passionate individuals who are dedicated to finding solutions to the opioid epidemic here in Ohio,” Nellis said. “We all have our various specialties, but we have to work collectively and in an engaged way to solve this issue. We’re able to do so much more by working together and assisting one another as we move forward.”

Throughout the day, the symposium featured a number of guest speakers who informed the 140 attendees of the various resources, efforts and challenges involved in combatting the opioid epidemic. Topics discussed included workforce issues such as clinical workforce expansion and increasing employment opportunities for people in recovery as well as clinical topics including trauma-informed care approaches, recovery housing and building evidence-based prevention capacity. In addition, participants were invited to take part in a virtual reality scenario involving “Destiny” — a patient experiencing opioid use disorder. The scenario was designed to help practicing healthcare professionals determine personal bias.

Dr. Kenneth Johnson, executive dean of the Heritage College of Osteopathic Medicine and chief medical affairs officer for the University, and Dr. Randy Leite, dean of the College of Health Sciences and Professions (CHSP), commended those in attendance for their dedication and efforts.

“All of you are uniquely poised to help. We are on the front lines. I’m so happy that we’ve been able to come together across the University and the community to try to help and make an impact,” Johnson said. “Others can and will use what we’ve learned today to address this crisis moving forward.”

“It’s easy for people to put their heads in the sand and just look the other way. I think the fact that we have a room full of people who’ve chosen not to do that is highly commendable,” Leite added.

Leite detailed the work of the Ohio Alliance for Innovation in Population Health (The Alliance), created in 2017, which has grown to more than 30 partner organizations that includes universities, public health departments and healthcare systems among others. He said the reason The Alliance exists is to address the greatest health challenges in Ohio and stated that opioid misuse represents the greatest of those challenges.

“Ohio University has helped to generate over $80 million in grants to help deal with the opioid issue in Ohio. That’s money that’s flowed through our region and our state due to the hard work of many here. We didn’t do that to line our pockets. Ninety-five percent of that money is flowing to partner organizations; people who are on the front lines fighting this battle,” Leite said. “Collaboration is the key to success. There’s power and strength in numbers. I want to thank you all for your commitment to overcoming the scourge of opioid misuse.”

Tracy Plouck, executive in residence for CHSP and organizer of the event, stressed that all populations are affected by opioid misuse, saying, “This is us. This is all of us.”

Plouck asked those in attendance to keep that statement in mind as they learned about the resources available in the state, how they are being used, what still needs to happen in this fight and what will hopefully be happening to curtail the opioid epidemic going forward. She asked that everyone “review, reflect and recharge” during the symposium.

Henderson presented details on a recent grant from the United States Health Resources and Services Administration in the amount of $1.35 million. The grant’s purpose is to increase the number of behavioral health professionals and to help meet Appalachian Ohio’s demand for substance use disorder prevention and recovery. In addition, the grant also calls for the creation of an annual conference for the region to discuss substance use disorder, including opioid use disorder. The grant will help educate 27 graduate students annually with a commitment to serve in the region.

Shamblin pointed out that the ratio of behavioral health professionals in the United States to the population served is 390:1 while the ratio stands at 700:1 in Ohio and 2,249:1 in the southern Ohio region. She also mentioned dental service as an overlooked need for those in recovery.

Alisia Clark, director of Community Planning and Collaboration at the Ohio Department of Mental Health and Addiction Services, shared a presentation that focused on the resources available to combat the opioid epidemic at the federal level and Dr. Mark Hurst, director of the Ohio Department of Health, elaborated on the rise — and, hopefully, fall — of the opioid crisis in Ohio. Hurst pointed out that in 2018, more than 3,000 people suffered an opioid-related death. He said substance use disorders are brain disorders and that many factors go into how someone reacts to drugs, how someone becomes addicted and how someone can overcome addiction. Citing prevention, early intervention, treatment and harm reduction as responses to the crisis, Hurst said it’s important to talk to children from an early age about drugs.

Opportunities for involvement include sitting down to dinner together, involving children in extracurricular activities and decreasing the opportunities for exposure to addictive substances simply by disposing of old medications promptly. While Hurst noted that improvement has been recorded in the fight against opioids, more work is needed.

Johnson agreed in his closing remarks.

“This issue we’re working on is really hard but every problem has a solution,” he said. “When we work together, ‘We can see the invisible and do the impossible.’”