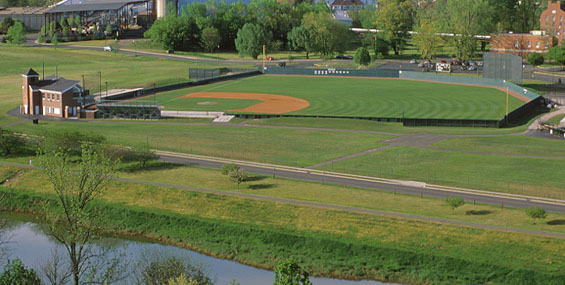 Bob Wren Stadium is located in the Athletic Mall, between Parks Hall and the Hocking River, coordinates D-4 on the campus map. It is marked as #129 on the map.

Trautwein Field in Bob Wren Stadium is used for all of Ohio University Men's Baseball games; for American Legion baseball tournaments during the summers; and also by the Southern Ohio Copperheads, who compete in the Great Lakes Summer Collegiate League.

The original Trautwein Field was located across Richland Avenue from the Convocation Center.

The construction of the Bob Wren Stadium was started with groundbreaking ceremonies on Saturday, April 26, 1997, and was competed in 1998. The stadium is the centerpiece of the new athletics mall and has a seating capacity of 2,000 people. It has a state-of-the-art playing field, which includes both horizonal and vertical drains under the surface. The stadium includes lighting, increased seating, concessions, restroom areas, team locker room, and an equipment room.

A native of Cleveland, OH, Bob Wren was educated at Ohio University, graduating in 1943. He played basketball and baseball while in school. He was a member of the 1941 Ohio University basketball team which went to the finals of the National Invitational Tournament at Madison Square Gardens, NY. Following graduation he played professional baseball in the St. Louis Browns chain, playing for the Toledo Mud Hens for six years.

He came to Ohio University in 1949 as the head baseball coach, assistant football and basketball coach. From 1949 through 1975, Wren coached 24 successful baseball seasons. His final coaching record was 464-160-6 for a winning percentage of .704. His teams won 11 MAC baseball championships. In 1970, the Bobcats finished fourth in the College World Series. Fifty-four Bobcat players signed professional contracts while Wren was coaching.

In addition to coaching, he served Ohio University as the Assistant Dean of Men, Assistant Director of Athletics and Associate Professor of Physical Education.

Bob Wren has been acclaimed by his fellow collegiate coaches as one of the outstanding coaches and baseball authorities in the United States. His teams always brought honor and acclaim to Ohio University.

Trautwein Field was named in honor of W. J. "Dutch" Trautwein. A native of Springfield, OH, he was educated at Wittenburg College. He came to Ohio University in 1928 from Wittenburg College, where he was on the coaching staff. He joined Ohio University as the assistant coach for football, freshman basketball, and baseball. He became head football coach in 1938. He was also an Assoicate Professor of Physical Welfare. As head coach of basketball, he carried on a winning tradition instituted by his predessor, B. J. "Butch" Grover, by completing 10 winning seasons without suffering a losing year. In 1941 the team went to the National Invitational Tournament in Madison Square Garden where they finished in second place. In 1965, he was named as a charter member to the Ohio University Athletic Hall of Fame.