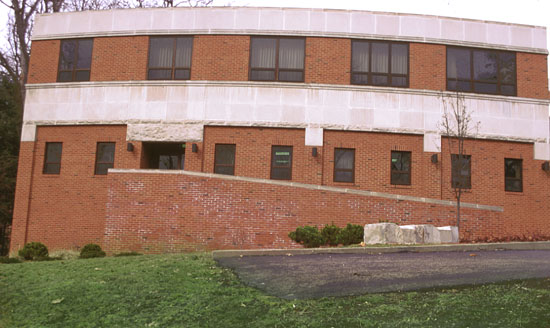 Edwards Accelerator Lab is located in the College Green, coordinates H-5 on the campus map. It is marked as #98 on the map.

Edwards Accelerator Lab houses a nuclear physics and materials science research laboratory, including electronics shops where some of the research equipment is made and repaired. The accelerator is a tandem Van de Graaff, that is used to accelerate atomic particles to energies up to 9 MeV (14% of the speed of light) via a large dome charged to high voltage by a moving chain. More details about the Accelerator Laboratory are available online.

The Edwards Accelerator Lab was opened in 1968 and used for experimental nuclear physics research. In 1994, the building was expanded to 17,400 square feet.

Edwards Accelerator Lab is named in honor of John E. Edwards. A native of Athens, he was educated at Ohio University, Ohio State University, and Chicago University. He was a member of the faculty at Ohio University for 40 years, serving from 1932 - 1972. He was Chairman of the Physics Department from 1951 - 1957. He was the first person to use radioactive isotopes on campus and established an isotopes committee which grew into the present Radiation Safety Committee. In 1962, he was named recipient of the Edwin L. and Ruth E. Kennedy Distinguished Professor Award. The certificate lauds him as one "whose widely acclaimed achievements have brought distinction and honor to him and to Ohio University." He was a member of the Science Committee of the Ohio Post-War Planning Commission from 1946 - 1949, serving as Chairman of an educational sub-committee within the group. He was a consultant for the Isotopes Division of the Atomic Energy Commission, American Council on Education on basic physics course for Armed Forces Schools, and Wright-Patterson Air Force Base on an X-ray problem. He served on the National Science Foundation Evaluation Committee, Washington D.C., concerned with science training programs. He authored several research articles in the fields of X-ray Spectroscopy and Nuclear Physics.