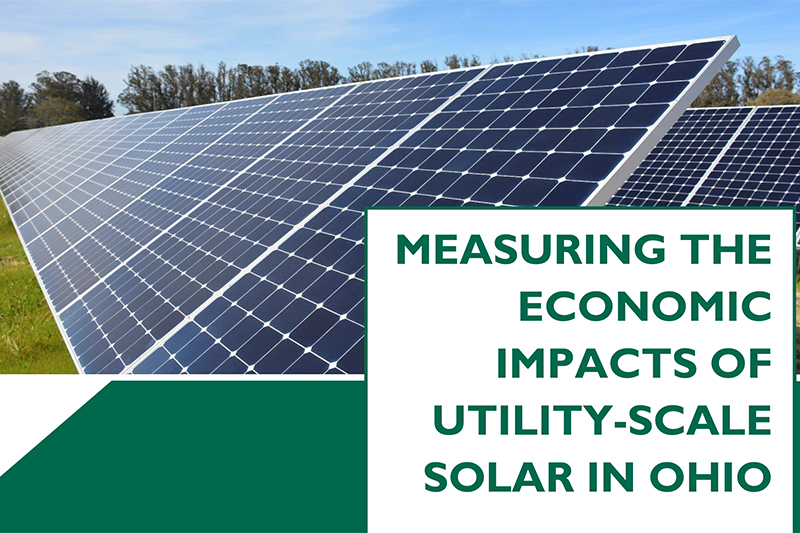 Installing utility-scale solar energy in Ohio could support more than 54,000 construction jobs, generate up to $67.5 million in local tax revenues annually and power over 1.5 million Ohio homes, according to a new study by Ohio University’s Voinovich School of Leadership and Public Affairs.

USSEC commissioned this study to better comprehend the aggregate economic impacts of current and future deployment of utility-scale solar in the state. In the final report, "Measuring the Economic Impacts of Utility-Scale Solar in Ohio," Michaud and the research team provide a detailed analysis of jobs supported, economic impact and tax revenue potential from utility-scale solar investment in Ohio.

“With proper planning and investments, Ohio can be a leader in the renewable energy economy,” said Michaud, who conducted the report over of six months. “Our compelling results show that Ohio can support new solar energy jobs, add additional dollars to rural communities and do it all in a way that is good for the environment.”

The report gives USSEC representatives comprehensive and tangible numbers to share with legislators, regulators and others to continue to make a case for the deployment of utility-scale solar, Michaud said.

“Ohio is undergoing a very pointed energy transition, and it’s exciting to be quantifying these changes and impacts for key decision makers,” Michaud said.

Michaud also noted that the solar energy facilities could also help to attract major corporations to Ohio, especially those with corporate sustainability missions who assess a state’s clean energy options as part of their site selection process.