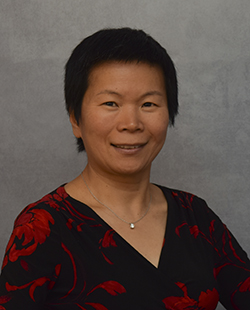 Wendy Zhan was born in China during the Cultural Revolution. She grew up in a rural village near the city of Fuzhou and recalls doing her homework under the light of oil lamps.

“[We had] no electricity, no running water,” she said. “My parents were sent to the countryside so I stayed with my grandma. She used these oil lamps and at night she turned them up a notch so I could study.”

Zhan has come a long way from rural China, literally and figuratively. Her studies led her to Beijing University and then 7,000 miles around the world to Ohio to continue her education. She rose through the ranks of the Ohio General Assembly’s Legislative Service Commission for 25 years, until being named its director in September 2019.

“I never imagined I could reach where I am today,” Zhan said.

When Zhan arrived in Athens, Ohio, in 1992, she had already earned bachelor’s and master’s degrees in history from Beijing University. She planned to earn a doctorate in history at Ohio University, but something made her reconsider.

“I was debating whether to continue in the history field, which I love, or study something else,” she said. “I thought, ‘Well, since I’m an immigrant, what better way to get to know the American culture and American people than to learn about their public administration?’”

One day, Voinovich School Founding Dean Mark Weinberg brought in representatives from the Legislative Service Commission to speak about state and local government budget legislation. The nonpartisan LSC helps the Ohio General Assembly with drafting and researching legislation, budget and fiscal analysis, and more. Zhan was searching for an internship to complete her degree.

“The LSC gave me a math test and said I was good enough to be an intern and that’s how I got started,” she said. “This is still my first job.”

“Wendy has gained extensive knowledge and experience during her tenure at LSC,” Householder said in a press release. “She is a proven and proactive leader who will lead LSC well. I have no doubt that she will do an excellent job. I look forward to working with her in her new role.”

Zhan has worked with Flanders since she started at LSC. When he became director in 2008, one of his actions was to make Zhan his deputy director in charge of the budget. She held the position for the last 11 years.

“We worked well together, and I learned a great deal from him,” Zhan said. “To follow in his footsteps is a great honor.”

One of Zhan’s biggest challenges in this new role will be tackling the fast-paced nature of the LSC’s work without sacrificing high standards.

“[It’s] a balancing act.” she said. “How can we continue to deliver quality services in a timely manner? The legislative process can sometimes be very fast moving — how can we ensure that quality?”

She also wants to grow LSC’s institutional knowledge and offer her staff fulfilling career opportunities that allow for a healthy mix of work and family.

“We have a wonderful group of very dedicated public servants,” Zhan said. “I’m excited to have the opportunity to lead such a talented group of folks to further improve our services to the general assembly.”

Weinberg noted that Zhan’s long record of dedicated service to the state of Ohio made her deserving of the Outstanding State Government Alumni Award she received in 2004 and her roll on the Ohio University Leadership and Public Affairs Advisory Committee.

“We were honored to recognize Wendy as an outstanding alumna based on her incredible record as a public servant and her commitment to the state of Ohio,” Weinberg said.

Zhan said she couldn’t have gotten where she is today without state-supported institutions, both in her native country and her adopted one.

“Public education is so important,” she said. “I had a solid public education from China, and I am very grateful for the additional education that I received from Ohio University. It really paved the way for the rest of my career.”