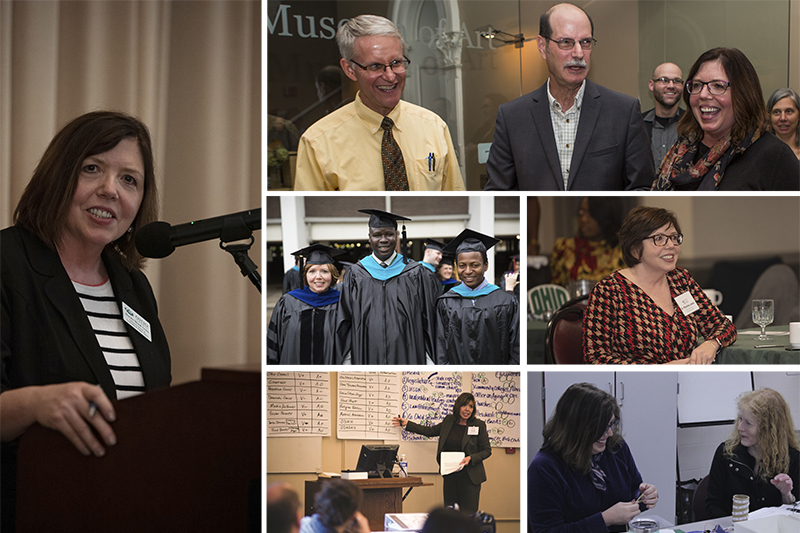 Lewis was associated with Ohio University for 27 years, beginning as a graduate student, transitioning to a faculty member and researcher, and concluding as an administrator. In that time, she saw the Institute for Local Government Administration and Rural Development (ILGARD) transform into the Voinovich Center for Leadership and Public Affairs in 1998, and helped it evolve into the multidisciplinary, public service-focused school it is today.

“The school has certainly transitioned into a very different organization from [ILGARD], but it still has the same mission essentially: to use the resources of the university and partnerships to work alongside communities and make people’s lives better in this region and in the state,” Lewis said. “I’ve been very privileged to work on that mission.”

Public education brought Lewis to the Voinovich School in the first place, and the school’s commitment to it kept her there. Lewis was a high school teacher and first-generation college graduate working in Newark, Ohio, when she took a sabbatical and enrolled in OHIO’s Master of Public Administration program in 1993.

“I chose the MPA because I thought it [would give me] a really good professional skillset that would benefit me throughout my career,” she said. “I certainly was right about that.”

As a graduate student, Lewis started working as a public management and policy specialist for ILGARD and has been employed by school ever since. A Southeast Ohio native, she was inspired by the university’s dedication to the state and the region.

“It’s a great privilege to work with people across the university, [with] everybody focusing on what a public institution should do, what a state school should do: to educate and to provide support and technical assistance to the people of Ohio,” she said. “It’s a great privilege to have worked at Ohio University and especially at the Voinovich School because of the wonderful people who are all there because they feel the same sense of purpose.”

To her coworkers and long-term associates, Lewis has been an invaluable resource.

Jim Mahoney, an OHIO assistant professor of practice and former executive director of the nonprofit Battelle For Kids, has collaborated with Lewis since 2001 when she led a research group for the nonprofit.

“She gives the gift of availability, and there’s a lot of people that can’t or won’t do that,” he said. “I think it’s part of what makes her such an incredible leader. Not only is she somebody who takes action and moves forward with things, but [she’s] someone who does a great deal of listening and understanding before she does.”

In 2017, Mahoney joined Lewis as a colleague at the Voinovich School.

“In her role [as associate dean], where there are so many people who have so many needs and are sometimes not all moving in the same direction, she is so empathetic, willing to listen, keeps positive attitude and always tries to do the things that make sense,” Mahoney said. “Maybe the thing that I respect the most about her is she’s always a teacher first. She cares about students [and] she cares about what happens to kids.”

In her time at OHIO Lewis worked on many projects related to educational policy research and evaluation for schools across the state.

“My passion has always been public education,” she said. “It has been a privilege to work alongside K-12 educators even after I left teaching in the high school classroom.  That’s been a real privilege and I’m grateful that that I’ve been able to continue to pursue that throughout my career.”

Jennifer Simon has known Lewis since 1995, when she was a graduate student at ILGARD and Lewis was her project leader.

“When I first got into grad school, I was super nervous, because it was my first ‘real job’ and Marsha just put me at ease,” Simon said. “She believed in me and gave me more confidence. She knew what it was like as a first-generation college student and knew what comes along with that.”

Simon, project manager for the Appalachian Regional Commission, an economic development partnership agency between the federal and state governments, has stayed in touch with Lewis and considers her a friend and mentor.

“She has this special way of working with people—she’s just down to earth, it helps them get things done,” Simon said. “Most of the leaders in the region really respect Marsha and her expertise, her friendliness, her kindness, her sense of responsibility to the region to do what needed to be done.”

Although she is retiring from the Voinovich School, Lewis hasn’t left her passion for education behind; she’s thinking about returning to the K-12 classroom in the next few years and plans to take classes at the Patton College of Education to update her skills.

“I’m looking forward to new challenges and adventures,” she said.

Looking back at her career, Lewis hopes she will be remembered for creating lasting relationships with her colleagues and accomplishing important work in the region.

“I think at the end of the day people remember, and what they care about, is who you were as a person,” Mahoney said.  “And while she has all those skills as a teacher—her students respect her and like her and learn from her—in addition to all that intellectual horsepower, she’s a remarkable person, and that’s what people remember.”