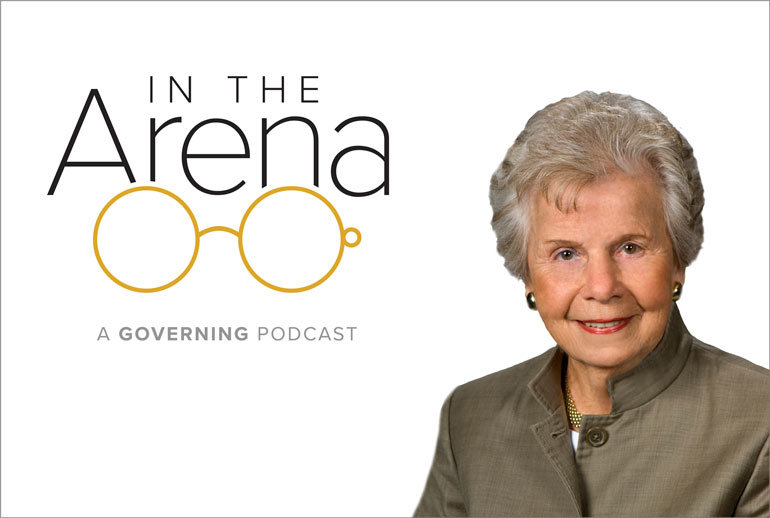 Jo Ann Davidson, emeritus professional fellow for Ohio University’s Voinovich School of Leadership and Public Affairs, was featured on the October 1 episode of “In the Arena,” a podcast produced by Governing News.

In addition to her Voinovich fellowship, Davidson is a member of Ohio University’s Leadership and Public Affairs Advisory Committee and received the 2013 Ohio University Outstanding State Government Alumnus Award

The podcast outlines Davidson’s career from her start as a poll worker, where she forged her way into an arena that was predominately male, to winning her first elected position, on city council in Reynoldsburg in 1967. Davidson later was elected clerk of Truro Township before winning a seat in the Ohio House of Representatives. She remained in the House for the next two decades, rising to become Speaker of the House of Representatives -- the first woman to hold that position -- in 1995. She was Speaker until she left the House in 2001, due to term limits.

Along with serving on various boards and charities, Davidson now uses her experience in politics to help other women follow her lead. The Jo Ann Davidson Ohio Leadership Institute is an eight-month program that prepares cohorts of 20 to 25 Ohio women to assume more prominent roles in their community of government.

“When I left the legislature 20 years ago, I wanted to start an institute to help the women lead and understand the merit of everything they have done, help them understand their self-worth, and help to teach them some of the politics of what to do,” Davidson said in the podcast.

And no one knows better than Davidson about the difficulty of being a woman in a field dominated by men – or the importance of taking up that challenge anyway.

“I think our biggest responsibility now is encouraging women to run, and I think our opportunity is greater than it’s ever been,” Davidson said.