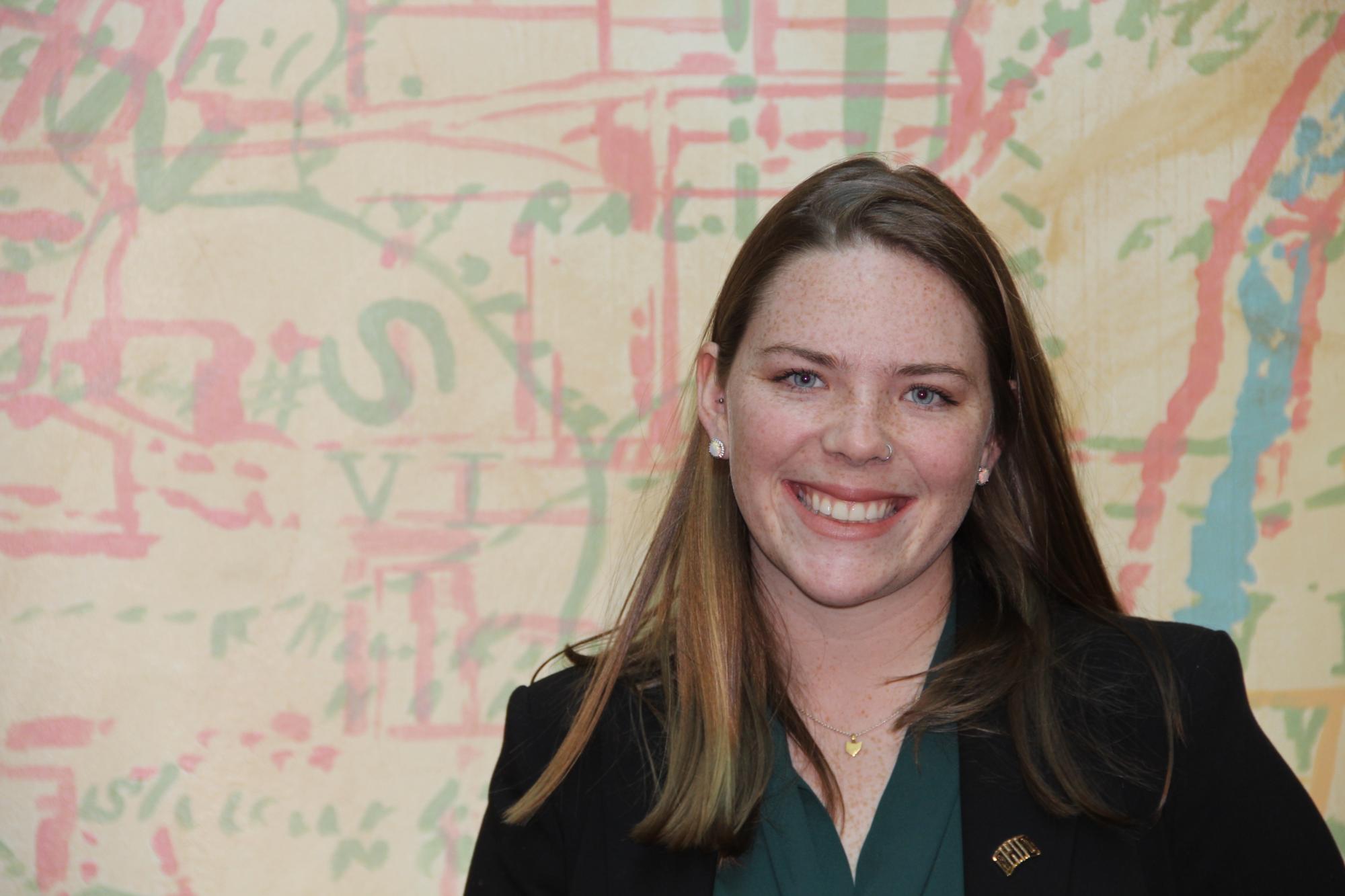 Following her May 2019 graduation from Ohio University, Hannah Burke packed up and moved to Washington D.C. for a 10-week internship with the International Economic Development Council.

Burke, who earned dual degrees in political science and economics, won this year’s Jeffrey A. Finkle Ohio University Economic Development Internship. The award sends an undergraduate or graduate student affiliated with the Voinovich School to IEDC’s headquarters in D.C. for a paid internship in economic development.

She learned about the internship through Faith Knutsen, the Voinovich School’s director of social innovation and entrepreneurship and Burke’s supervisor at the Social Enterprise Ecosystem, where she spent her senior year as a research assistant.

“That job is the reason I have this job, which is awesome,” Burke said. “I’m very grateful for the fact that I had the Voinovich School last year.”

Jeffrey Finkle, IEDC’s president and CEO, is a 1976 graduate of Ohio University. He has remained closely involved with his alma mater and currently serves as the Voinovich School's Appalachian New Economy Partnership Fellow.

For Finkle, working in D.C. while in college was incredibly helpful for his career, but getting there was difficult.

“I could not have afforded to come to Washington without a paid internship,” he said.

Finkle recognizes that this difficulty remains and puts students who cannot afford unpaid internships at a disadvantage.

“Going to Ohio University may be the most some students can afford -- that was certainly the case in my family,” he said. “Then there are students who go to Ivy Leagues or other very expensive schools, and their families can write those checks and their children can take a free internship in Washington.”

This understanding led Finkle to establish the Ohio University Economic Development Internship in 2011.

“For my 25th anniversary as CEO of the IEDC, my board of directors asked me if I wanted anything,” Finkle said. “I said to them that I wanted us to have an ongoing relationship with my alma mater.”

He knew Voinovich School Dean Mark Weinberg since before the school was established in 2007, as well as the late Sen. George Voinovich himself.

“Having the confidence that I have in Dr. Weinberg and knowing George Voinovich, having an internship with the Voinovich School is a huge honor for me.” Finkle said. “I am proud that we have such a relationship.”

A sign of his confidence: interns are selected by the Voinovich School, not IEDC.

“The quality of people that we get from the university have been superb,” Finkle said.

During her internship, Burke worked in the IEDC’s knowledge management department. She worked with the organization’s in-house think tank, conducting research for papers that would be published in IEDC’s Economic Development Journal. One of her projects was to create case studies for an upcoming paper on balancing worker’s rights with income growth -- a topic she is passionate about.

“Working in economic development is definitely something that I would continue doing,” Burke said. “Even in the short term, doing research for that was really helpful.”

Some of her other responsibilities included writing blog posts for IEDC’s newsletter, helping with social media and conducting research for IEDC’s Clearinghouse Information and Research Service.

When her 10 weeks were up, Burke was asked to stay on for a full-time, temporary position in IEDC’s communications department. She is currently helping to redesign the organization’s website.

“I’m definitely learning a variety of skills that I can use for different positions,” she said. “That has been really helpful as I am applying for full-time jobs.”

Burke said IEDC and Finkle have provided support and networking opportunities throughout her time in D.C.

“Jeff has been an awesome resource,” she said. “He’s a great Bobcat to know.”

Burke doesn’t plan to leave the city any time soon and is grateful to the IEDC and the Voinovich School for starting her career off on the right foot.

“I would definitely tell other people to apply for the internship — it’s a great way to get to D.C. and make connections here and learn about economic development,” she said. “It’s easier to get a job once you’re here than to be trying to do that in Ohio.”