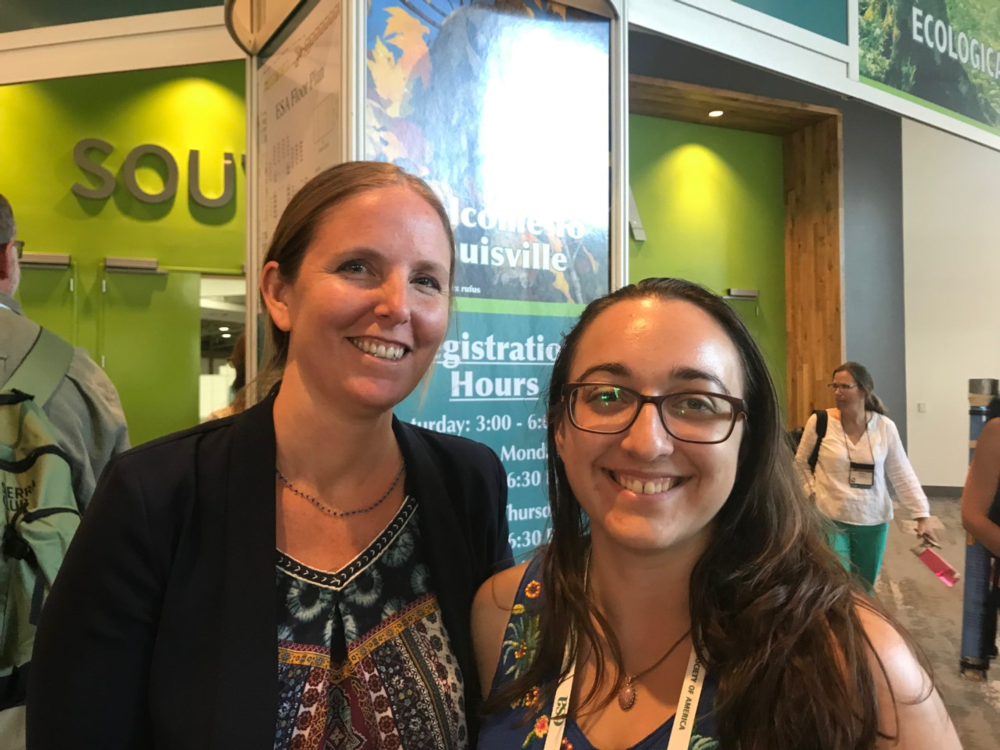 When thousands of ecologists from around the country and world gathered in Louisville, Kentucky for the Ecological Society of America’s annual meeting, they heard a lot about the work happening at the Voinovich School.

Holding the meeting in Kentucky and centering it around the theme, “Bridging Communities and Ecosystems: Inclusion as an Ecological Imperative,” meant that many topics were relevant to the school and region, said Dr. Sarah Davis, associate professor in the Voinovich School. Davis also chairs the ESA’s Agroecology Section.

“There was a lot more discussion at this particular meeting about community engagement, which is a major theme for us here, and really connecting human dimensions to the ecological processes,” she said. “Some of the discussion was around including Appalachian communities and thinking about smaller landholders that don’t fit into the commercial agriculture model that usually dominates research activity.”

“The point was to talk about really different kinds of agricultural management systems, from large scale production systems to smaller scale applications in diverse communities across the nation and around the world,” Davis said.

During the workshop, Filyaw discussed his work in sustainable Appalachian agroforestry through Rural Action. Whitman provided an international perspective by talking about her experiences with local farmers in Madagascar.

Whitman spent three months in Madagascar conducting research for her master’s thesis, asking farmers about their awareness and use of the sustainable agriculture methods promoted by international organizations. After earning her degree from the Voinovich School in 2017, she returned to Madagascar as a Fulbright Fellow to share her findings with those farmers and to expand on her work by studying rice farming in protected areas.

“A lot of times researchers will go to a place and do a study, and then publish it in English, and the people that are in that local place don’t get to see what happens,” she said. “They don’t get to read the article.”

Whitman’s research aims for a greater understanding of rural farmers’ needs and the ways they feel they are misunderstood by the outside organizations that recommend agricultural practices.

“There are lots of ways that people grow rice in Madagascar depending on the type of land and the setting and the resources available,” she said. “A lot of people know about the alternative method that’s being promoted but they don’t really use it because it doesn’t make a lot of sense for what they have available in terms of land and time and money. “

Whether in Meigs County, Ohio, or rural Madagascar, looking out for “the little guy” was always a focus at the Voinovich School, Whitman said.

“At the Voinovich School, we have a unique setting,” she said. “We’re set in Appalachia, we’re generally concerned with environmental justice issues, and that does cross over because we’re talking about marginalized populations—people who are affected by these big systems of the world but have little agency to act on them.”

Rodjom, a second-year graduate student in the Voinovich School, presented a poster of work that will go into her upcoming master’s thesis: a life cycle analysis of two interconnected bioenergy systems

“I’m trying to figure out the benefit of putting these two systems together,” Rodjom said.

She enjoyed discussing her work with other ecologists and said that attending the meeting — her first conference — expanded her understanding of the field.

“I’d never really thought of myself as an ecologist before this,” she said.

Adjuik received his Master of Science in Environmental Studies this summer. The ESA awarded him a scholarship to attend the meeting and present his research, which included findings from his thesis. He studies alternatives to conventional, nitrogen-rich fertilizer as a way to reduce the greenhouse gases associated with agriculture.

Adjuik said he is grateful for the support and training he received from the Voinovich School.

“To be able to present the poster of my research, to be alongside people who have been in ecology for maybe all of their lives, was an accomplishment for me,” he said.

Davis said presenting research at the meeting is an excellent networking opportunity for her students.

“They’re networking with an international community of people who are potential collaborators, employers and grant funders,” she said. “Program officers from major funding bodies of the federal government are also there interacting with them.”

Davis hopes this year’s meeting gave her colleagues from other regions a better understanding of Appalachia.

“The conversations were very different at this meeting because of the location,” she said. “Most of our students have a really good understanding of [Appalachia], but it’s not always a prominent theme in discussions at these international meetings. It was interesting to hear my colleagues’ reflections on that difference too—recognizing that there are issues [here] that deserve more attention and more discussion.”