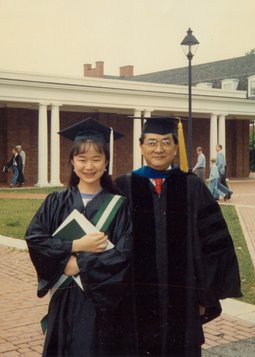 Ohio University Honors Tutorial College 1993 alumna Dr. Jue Chen has been elected as a member of the National Academy of Sciences.

Chen, who studied chemistry at OHIO, is an investigator at Howard Hughes Medical Institute and the William E. Ford Professor of Biochemistry at The Rockefeller University in New York.

“I was very fortunate to be admitted to the HTC,” said Dr. Chen. “The flexibility of their academic program and the opportunity to work directly with professors was unique and extremely helpful. As a student who transferred from China, the experience at Ohio University opened my eyes and paved my way to a scientific career.”

The biochemist is among the 100 new members and 25 foreign associates of the National Academy of Sciences, which recognizes distinguished researchers and their continual achievements. Chen is also among the 40 percent of newly elected members who are women — the most ever elected in any one year.

“Jue was one of my HTC-Chemistry advisees in the early 1990s,” said Dr. Howard Dewald, associate provost for faculty and academic planning. “She performed undergraduate research with me which resulted in her first scientific publication in Microchemical Journal on cyclic voltammetry of a ruthenium compound in a polymer modified electrode. I was elated to learn of her election to the NAS knowing the recognition and honor it brings.”

Chen was born in Changsha in China’s Hunan province. After three years at Tongji University in Shanghai, she transferred to Ohio University in Athens, where her uncle, Shih-Liang Wen, was a math professor. She did her doctoral work at Harvard University with Don C. Wiley, a prominent structural biologist. She went on to the Baylor College of Medicine for her postdoc and then to Purdue University.

The National Academy of Sciences (NAS) is a private, non-profit society of distinguished scholars that was established by an Act of Congress, signed by President Abraham Lincoln in 1863. The NAS, according to its website, is charged with providing independent, objective advice to the nation on matters related to science and technology.

Scientists are elected by their peers to membership in the NAS for outstanding contributions to research. The NAS is committed to furthering science in America, and its members are active contributors to the international scientific community. Nearly 500 members of the NAS have won Nobel Prizes, and the Proceedings of the National Academy of Sciences, founded in 1914, is today one of the premier international journals publishing the results of original research.