Forecasters may be looking in wrong place when predicting tornadoes, OHIO research shows 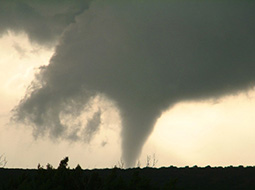 Photo courtesy of: Jana HouserNew OHIO research shows forecasters may be looking in the wrong place when predicting tornadoes.

Weather forecasters may be looking in the wrong place when working to issue tornado warnings, new research led by Ohio University has demonstrated.

Historically, there have been a wide number of conflicting theories about how tornadoes form, but the most widely accepted was that they form from the top down, based on work done from the 1970s through the 1990s. For the first time, new observational evidence shows that they actually form from the ground up, which could have a profound impact on the way tornado warnings are issued in the future. It’s the first time these hypotheses have been able to be evaluated observationally, thanks to a modern radar system that collects data very rapidly.

“We need to reconsider the paradigms that we have to explain tornado formation, and we especially need to communicate this to forecasters who are trying to make and issue warnings,” said Dr. Jana Houser, assistant professor of meteorology at Ohio University and co-author of the new study. “Based on our results, it does not look like you are going to really ever be finding strong evidence of a tornado descending, so we need to stop making that a priority in our forecasting strategies.”

A team led by Houser demonstrated that tornadoes actually form at the ground and move up rapidly, contrary to the long-held hypothesis that most tornadoes form at cloud level and descend to touch the earth. This evidence, the first of its kind, was gathered after Houser observed an EF5 tornado in May 2011; this work began during her doctoral work at the University of Oklahoma. Those findings were subsequently confirmed through observations from several other tornadoes, including a very compelling visual and radar analysis of the deadly El Reno tornado of May 2013.

“The coupled visual and near-surface radar observations from the El Reno 2013 case enable an analysis of the tornadogenesis process that has never before been obtained, providing a missing link in the story of tornado formation: the rotation associated with the tornado was clearly present at the surface first,” Houser said. She presented the findings to the American Geophysical Union at a conference Dec. 14.

The findings indicate that a tornado-strength vortex can be active on the ground for a minute or more before the deeper tornadic column forms and is picked up by conventional radar. However, tornado warnings are issued based on radar readings that pick up vortex signatures at or above cloud level.

“We need to strategize how we’re issuing warnings a little bit differently. The way we’re doing it, we’re never going to get an improvement on our warning system,” Houser said.

The challenge is in getting those kinds of readings quickly. Conventional radar can’t get ground-level readings over a broad area because objects in the way, such as hills, buildings and trees, disrupt the data, and they collect data slowly. Houser’s data came from the University of Oklahoma’s Rapid-scan, X-band, polarimetric mobile radar (RaXPol). Radar observations of the wind field were used to track tornadic signatures in the core of the storm. In the 2013 El Reno tornado, observations showed evidence of a tornado that was only visible in radar data less than 20 meters above the ground, but nowhere else, at the beginning. The next elevation angle above showed no tornado-strength rotation.

In all four cases, none of the tornadoes formed from the top down. Three formed from the bottom up, and one contracted almost simultaneously over the depth of the column being observed.

The tornadoes formed in 30 to 90 seconds, making the prospect of forecasting tornadoes with 100 percent accuracy seem bleak.

In the largest tornado the team studied, the deadly 2013 El Reno tornado, video documentation showed that a funnel cloud was visible for one minute and 40 seconds before the development of a radar-derived, vertically-continuous vortex. That storm ultimately had a width of 2.6 miles and winds exceeding 300 miles per hour.

When radar data were re-examined, it was determined that the only sign of tornadic-strength rotation that existed at the beginning occurred in the lowest elevation data, less than 20 meters above the ground, which was present for about one minute before the tornado’s formation and persisted until the rest of the tornado developed. This provided the first confirmation that this tornado began at the ground and was able to persist at that level for almost two minutes before the formation of the deeper vortex.

Houser said that by better understanding the mechanisms of tornado formation, it’s possible forecasters can generate short-term, high-resolution models of storms just hours before they occur to determine their likelihood of producing a tornado, efforts already being pursued by the National Weather Service and the National Severe Storms Laboratory.

Other efforts could include stationary, ground-based radar systems, though there would need to be a blanket of them to prove effective, as well as storm spotters relaying visual responses to forecasters.

“If we can get a concrete picture of what’s happening in tornado formation, we’ll have better insight into the processes and mechanisms in predicting tornadoes,” Houser said. 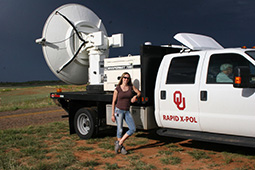