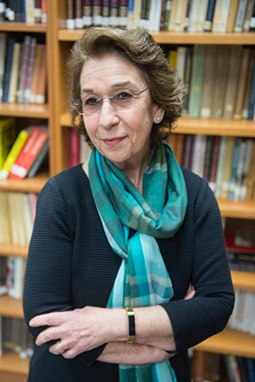 Gillian Berchowitz will cap a long and innovative career at Ohio University Press and its trade imprint, Swallow Press, with her retirement on Dec. 12.

She was hired at the press as assistant production manager in the 1980s, served as editorial director from 2009 and as director since 2013.

As director and editor-in-chief, Berchowitz has supervised all Press departments and in her concurrent role as editor-in-chief, acquired a wide variety of scholarly, regional, and trade titles. She works with publishers across the world to make press titles available internationally and to acquire selling rights in North America and other territories. She has developed a robust foreign rights department and a network of literary agents and distributors who represent Press books abroad.

Most recently, she has helped establish the Press in its current offices in Alden Library. This added visibility has better integrated the Press into university life and helped the wider university community become more aware of the its unique contributions to intellectual and cultural life in Athens and beyond.

In particular, Berchowitz, a native of South Africa, initiated and developed Ohio University Press’s distinguished African studies list and several series with a global emphasis, including Perspectives on Global Health, the Indian Ocean Studies Series, New African Histories, Africa in World History, Modern African Writers series and the Ohio Short Histories of Africa. From 1994 she served as editor and then executive editor of the Research in International Studies series, published with the cooperation of OU’s Center for International Studies. The series focuses on African, Latin American, Southeast Asian, and global and comparative studies. She has also been instrumental in building the Press’s award-winning Appalachian studies list, which encompasses a range of academic disciplines as well as fiction, poetry, and literary nonfiction. Berchowitz has developed more than 30 series.

“The wholehearted trust and respect that I have for all the staff members and our advisory board has made me confident and willing to take risks,” Berchowitz said. “I have felt that I could approach any author anywhere knowing that, even though we are not a large press, we can offer a remarkable experience to authors across the board.” She added, “I am especially proud of my role in developing and championing our African and Appalachian studies lists, which have garnered major reviews and awards.”

Incorporated in 1947, Ohio University Press and its trade imprint, Swallow Press, comprise the oldest scholarly press in Ohio. Since its founding, it has developed into a leading publisher of books about Africa, Appalachia, Southeast Asia, and the Midwest, as well as on many other topics. From academic monographs to regional histories to internationally acclaimed literary works, including those of Anaïs Nin and Janet Lewis, its books have established the Press as an essential member of its many communities: scholarly, literary, and geographic.

Executive Vice President and Provost Dr. Chaden Djalali has announced the search for a new director. In the coming months, the University will conduct a nationwide search to begin actively recruiting qualified applicants. Early next semester, the search committee will assist EVPP Djalali with selecting a final pool of candidates to bring to campus for interviews.