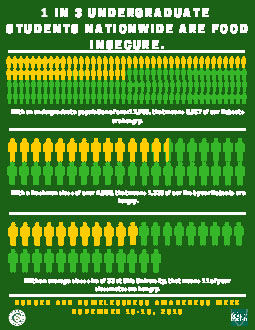 Graphic courtesy of: Office of the Dean of StudentsAn infographic, created by Abby Jeffers, shows that one in three undergraduate students nationwide are food insecure. The data is from a 2018 report by the Northern Virginia Community College.

OHIO Cutler Scholars and OHIO’s Dean of Students Office recently led a joint effort during Hunger and Homelessness Awareness Week to raise awareness about hunger and homelessness on college campuses, raise awareness about available resources to combat those issues and collect donations for the Baker University Center Food Pantry — and they did it all with the help of a few tiny elves.

Students were stationed, with the popular “Elf on the Shelf” dolls displayed, on the fourth floor of Baker University Center from Nov. 12 through Nov. 16 collecting donations and informing people about food insecurity statistics and how that relates to Ohio University’s campus.

In total, the group collected 153 pounds of food and $148. The dollar donation will allow them to purchase 673 pounds of food from the food bank which translates into 50 meals.

The students also set up a table to collect donations outside of the Nov. 15 National Broadway Tour of “ELF The Musical” at OHIO’s Templeton-Blackburn Alumni Memorial Auditorium.

“We decided to call it ‘Elf on the Shelf’ because we were trying to fill a food pantry shelf at ‘ELF The Musical,’” said Cutler Scholar Danielle Klein. “We used the elves on the tables to draw people in and to advertise that we would be at the musical.”

In addition to their physical presence, students also took over a few social media pages, including Ohio University’s main Instagram page, during which they shared national statistics and more, including:

• 15 percent of undergraduate students nationwide have experienced homelessness, according to a 2018 report released by the Northern Virginia Community College.

• One in three undergraduate students nationwide are food insecure, according to the same report.

Abby Jeffers was one student who worked on the week of awareness project since its inception and is now on the Food Pantry steering committee. The committee makes decisions and generates ideas to collect food for the Baker University Center Food Pantry.

She said hunger and homelessness is an important issue to her because while she was lucky enough to grow up without having to worry about food or a roof over her head, she knows that so many others have not. Jeffers said her mother, who grew up in rural West Virginia, was homeless for a period of time.

“We've been back to her hometown a few times since I was born, and every time, I am incredibly grateful for what I have,” Jeffers noted. “I want to help other students so that they don't have to worry about food or shelter on top of an education.”