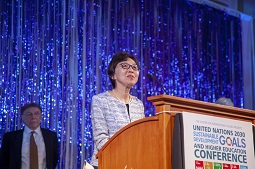 “First, I would like to thank Dr. Tomoyasu Tanaka, who is the father of the Ohio University-Chubu University relationship,” Imamura said during her remarks at the gala.

Imamura began teaching at Chubu University in 1991 and worked for several years with Tanaka, who was a faculty member at OHIO before serving as the director of the Center for International Programs at Chubu University. He helped to create the historic partnership between OHIO and Chubu, and OHIO’s Tanaka Hall is named in honor of the Tanaka Family. Tanaka passed away several years ago, and Imamura said she thinks of him often.

“He might be glad to know that I have been selected for this award,” she said.

Imamura believes strongly in the importance of learning multiple languages in order to better understand the world and to work globally. An accomplished scholar, she has written more than 10 textbooks on topics such as English language testing, sociolinguistics and the English language around the world

Imamura has also assisted with the partnership with Ohio University in numerous ways throughout her career. In working with the Center for International Programs at Chubu University, for example, she often assisted OHIO faculty members who were serving as Kohei Miura Visiting Professors at Chubu University. Imamura would invite them to her home to experience Japanese culture through attending tea ceremonies, playing the koto (a traditional Japanese stringed instrument) and cooking traditional Japanese dishes.

She also served as the deputy director of Chubu’s Center for International Programs from 2013-2014 and worked closely with Ohio University during that time. In addition, she has encouraged her students over the years to take part in student exchange programs at OHIO and at other institutions around the world, and accompanied a group of students on a visit to OHIO in 2005. She also visited OHIO and gave a presentation in 2011 while she was serving as a visiting professor at Purdue University.

As the Tanaka-OHIO Award winner for 2018, Imamura was involved in a series of events during International Education Week. Those events included meetings with students, faculty and staff, giving a presentation to students and faculty in the Linguistics Department, attending the International Dinner, taking part in the United Nations 2030 Sustainable Development and Higher Education conference and speaking at the Global Engagement Awards Gala.

“I am so honored to receive this Tanaka-OHIO Award,” Imamura said. She thanked all of the faculty, staff and friends who have supported her during her career, and said she was proud to be part of the OHIO and Chubu University partnership.

“Since 1973, Ohio University and Chubu University have jointly nurtured a close and mutually beneficial partnership in international higher education,” Imamura said. “This partnership has become an example of international academic collaboration, and has helped our two institutions evolve into true sister universities. I would like to continue working with you for promoting our academic ties between Ohio University and Chubu University. “

Submitted by the Office of Global Affairs 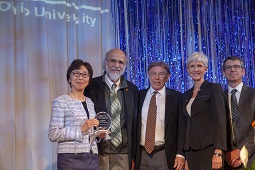 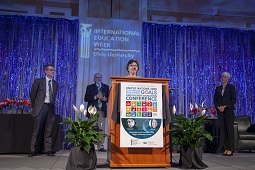