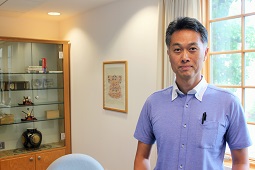 A professor in the Department of Robotic Science and Technology in the College of Engineering, Hirata also serves advisor to the Chubu University President. He traveled from Japan to OHIO on Aug. 13 and will remain on campus continuing his work until Sept. 13

While Hirata is visiting OHIO, he is collaborating with Professor Scott Hooper from the Department of Biological Sciences and working with his research lab in Wilson Hall. He is also talking with students, giving special presentations, and meeting with College of Engineering and College of Arts and Sciences faculty members, as well as faculty members from other disciplines who may be interested in working on research projects with Chubu University.

“Part of the reason I wanted to come to OHIO was to engage with faculty who are interested in collaboration,” Hirata said. Faculty members who would like to meet with him to talk about their interest in Chubu University can email him at yutaka@isc.chubu.ac.jp.

Hirata earned his Ph.D. in Systems Information Science from the Toyohashi University of Technology in Japan and completed post-doctoral work at the Washington University School of Medicine in St. Louis. Before joining Chubu University in 2000, he also worked for the National Space Development Agency of Japan.

His current research work is focused on neuroscience, specifically on the areas of eye movement and control. One main area of study involves the eye movements of humans in relation to driving cars.

“We are trying to detect the signs of sleep by studying the eye movements,” Hirata said. His laboratory work studies the eye movements of drivers in order to detect when the drivers are beginning to get tired and unsafe for driving.

The vestibulo-ocular reflex, or VOR, is the name for how the eye stabilizes movement in order to help humans see better, Hirata explained. When a person walks, for instance, the head moves up and down, but the VOR stabilizes the vision so the sight remains steady. It has been recently discovered that when a person’s alertness gets lowered, the VOR starts to degrade before he/she is even aware of the sleepiness. Thus, the VOR can be a predictor of sleepiness. Hirata’s research studies the VOR, and he hopes his work can help to reduce the number of accidents caused by fatigued drivers.

Hirata is enjoying his time at OHIO and said that the research projects he has been involved with already have been very helpful. He appreciates the scenic campus and is enjoying getting to know faculty and staff.

Outside of his research work and teaching, Hirata also enjoys running, swimming and sampling craft beers, and he also serves as the volleyball coach for the women’s volleyball team at Chubu University.

This year’s Kohei Miura Visiting Professor is Chris Thompson, associate professor of linguistics. This Compass article provides additional information on the work that Thompson will be doing while in Japan.

The OHIO and Chubu University partnership also involves student exchanges and a wide range of collaborative projects that align with OHIO’s Global Strategy, which supports interdisciplinary global programs and initiatives.