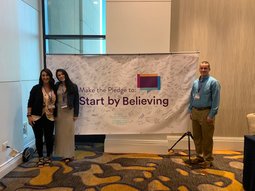 Castor said they submitted a proposal to present at the conference in April 2018 and received notice soon after that their proposal was accepted from an extremely competitive selection process. It allowed OHIO to have a presence among the nation’s leading experts on sexual assault and interpersonal violence.

“We were honored to be among such successful and well-known professionals in the field, including Russell Strand, who is an international recognized expert in sexual assault investigations, response to trauma and forensic interviews,” Castor said, “as well as Angela Povilaitis, the lead prosecutor on Michigan’s sexual assault case against former USA gymnastics and MSU doctor Larry Nassar, and Detective Andrea Munford of Michigan State University’s Police Department, who was responsible for the criminal investigation of Larry Nassar.”

Castor said the audience was very receptive during their presentation, which had more than 400 attendees. She said they ran out of timebefore everyone was able to ask questions and engage with them, but after the presentation, they spoke to numerous attendees, including prosecutors, advocates, law enforcement and members of the military.

“I absolutely think it’s important that OHIO had a voice at an international conference on sexual assault because it provided us the opportunity to share the work that we are doing to support survivors and improve processes in our community, while also learning from leading experts in the field,” Castor added.

Detective Austin noted the conference was extremely rejuvenating. According to him, investigating sexual assaults is tough, draining work and it was “very nice to spend time with others in the field, feel that larger collective energy and celebrate each other’s work."

He also said he became even more motivated to do a better job to provide justice and serve survivors.

“It was quite inspiring to be able to share the work that the Ohio University Police Department and Ohio University as a whole is doing around Start by Believing and improving how we respond to sexual assault,” Detective Austin added. “We don’t often have a larger view of where we fit within the larger world. From the feedback we received, I believe that OHIO is among the leaders in striving to hold perpetrators accountable and responding to survivors of sexual assault in an empathic, empowering, and survivor-centered manner.”

Castor has extensive notes from the conference and plans on formulating next steps for ways to bring what she learned back to Ohio University.

The director of the Survivor Advocacy Program said it was the best conference she's ever attended.

“My utmost appreciation goes to Brie Sivy because she has chosen to take one of the most horrible experiences of her life and use it to improve processes for future survivors," Castor said. "The impact that she is making is never lost on me, but I hope one day she realizes the true power her voice has and the difference she is making by speaking out about her experiences.”