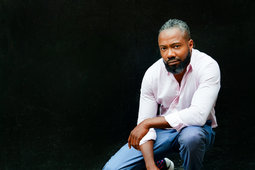 As a part of Ohio University’s “Challenging Dialogues” lecture series, Al Letson will speak to the University community about “When to talk, when to walk, & how to always stand in your truth” at 7 p.m. Monday, April 22 in Baker University Center Theatre.

Letson’s talk will focus on talking to people you disagree with, but at the same time, knowing when it’s time to let those conversations go.

“There are roles for all of us — some of us can talk to anyone whereas others should pick and choose their battles for their own safety and mental health,” Letson explained. “This will be a real-world guide to navigating the widening gulf in the public discourse.”

Letson is a poet, playwright, performer, journalist and radio and podcast host. Letson created, hosted and executive produced Public Radio Exchange’s (PRX) State of the Re:Union (SOTRU) from 2008-2014, a program that garnered critical acclaim and numerous awards, including a Peabody Award.

In 2015, SOTRU ended production and Letson joined the Center for Investigative Reporting and PRX to help launch and host public radio’s first hour-long investigative journalism show, “Reveal.” The show is heard on more than 470 public radio stations and has more than 1 million downloads a month.

Letson also created and hosts the podcast, “Errthang.” The podcast includes storytelling, radio drama, pop culture reviews and interviews. Letson takes all the things floating in his head and turns it into a mixtape of delight for listeners.

A true renaissance man, Letson got his start on stage as a performance poet, actor and playwright. His plays and performances have been produced off-Broadway and on stages across the country. A self-described comic nerd, Letson has written for DC Comics and published two graphic novels.

The purpose of the “Challenging Dialogues” lecture series, which was identified as a strategic priority  for OHIO by President M. Duane Nellis, is to provide outlets for constructive conversations regarding contemporary issues that spark national and/or international attention. The lecture series, and its topics, are being spearheaded by the  Challenging Dialogues for Contemporary Issues task force, which was formed by President Nellis in April 2018.

The ongoing speaker series is anticipated to vary in style and format based on topics and presenters; formalized lectures, panel discussions or multiple “Ted Talk-style” presentations are possible. OHIO held its first “Challenging Dialogues” lecture on Jan. 24 when Dr. Carolyn Lukensmeyer from the National Institute for Civil Discourse spoke on reviving civility.