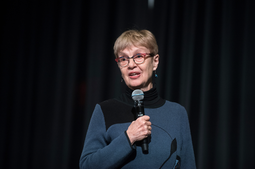 Ohio University hosted its first “Challenging Dialogues” lecture on Jan. 24 in Baker University Center. The series is part of the University’s ongoing efforts to provide constructive outlets for campus-wide discussions about issues sparking debate across the nation and world.

Dr. Carolyn Lukensmeyer, executive director emerita of the National Institute for Civil Discourse, served as the series’ first keynote speaker and led a thought-provoking lecture entitled, “The Power of In/Civility: Engaging in Challenging Conversations Across the University, Community, Nation.”

OHIO President Dr. M. Duane Nellis thanked Dr. Lukensmeyer for visiting and sharing her knowledge and expertise on civil discourse with Ohio University; he also expressed his gratitude for the Challenging Dialogues for Contemporary Issues task force who spearhead the development of the new lecture series.

Dr. Nellis explained that the intent behind the new series isn’t to “solve a specific issue or persuade someone to a particular conclusion, but to realize the importance of keeping lines of communication open.”

Dr. Lukensmeyer commended President Nellis for creating a lecture series on difficult conversations as one of his strategic priorities for the University and said she was proud to be a part of its launch.

“Thank you so much for the work that you do,” President Nellis added. “Getting Americans to talk with one another, that’s no small feat in this day. Thank you for kicking off this very important lecture series.”

Throughout her lecture, Dr. Lukensmeyer encouraged the audience to, no matter how hard, find common ground with someone they disagree with.

If democracy is going to work, she explained, it has to be a conversation — but the quality of that conversation really matters.

“How is it that our public and political discourse has become so degraded? People who are researching this and talk about it a lot say this is something that has been building for decades,” Dr. Lukensmeyer said. “It is also true that the presidential election cycle in 2016, both primary and general, really took it to a different level.”

Such degraded discourse didn’t start with peoples’ behavior, she explained, but a set of structural changes in their lives, including: money in politics, gerrymandering, election rules, the 24/7 news cycle, social media, growing economic disparities and rising social isolation.

During in her keynote, Dr. Lukensmeyer showed a video clip of two people on the opposite ends of the political spectrum who became unlikely friends – How did this happen? One simply invited the other out for coffee, and they discovered that they had a lot more in common than either of them had first thought.

“The message is, we don’t have to be enemies when we’re on the opposite side of something,” said Dr. Lukensmeyer. “We just have to learn to see each other as human beings.”

Dr. Lukensmeyer displayed several political cartoons during her lecture. One depicted two adults verbally arguing and their children next to them saying to each other, “Wanna talk?”

Another cartoon displayed an individual on a gurney being rushed to a hospital with the word “civility” written on them. Dr. Lukensmeyer said what we don’t know is if that person — civility — will live or die.

Following her lecture, Dr. Lukensmeyer moderated a panel discussion with Dr. Robert Ingram, Dr. Laura Black and Tyrone Carr. The panel shared how they engage their students in civil discourse and much more.

Dr. Lukensmeyer also hosted an hour-long scholarly discussion with numerous University students, faculty, staff and community members prior to her evening keynote lecture. She stressed that the issue of civility and incivility greatly matters.

“We are absolutely bombarded on a daily basis with profound examples on incivility, disrespect, dehumanizing — and people understand that there’s something about civility that really matters,” she told the diverse group.

Americans are living at a distance from one another and making moral judgements about one another because of their differing political views, she said.

Dr. Lukensmeyer shared that she and her colleagues have spoken with political historians across the ideological spectrum, and asked each of them the same question: Is civility any worse today than it ever was?

“Everybody goes back to the Adams-Jefferson presidential race where yellow journalism was lying, but that was an aberration at that time,” she added. “Whether they were on the right or the left of their ideology, 100 percent of the political historians we talked to that the phenomena we are watching right now in the United States of America, where we are demonizing each other because ‘you voted for Hilary and I voted for Trump,’ has not been seen since the Civil War reconstruction and Jim Crow.”

While she said the tense political climate will likely get worse over the next two years, Dr. Lukensmeyer has hope for Americans.

She praised OHIO for wanting to come together with its community to serve as a model of two entities, close in proximity but distant, who are equally committed to reestablishing the norms of civility and respect.

“If in fact we are going to do something about this,” she said, “it’s going to come from we the people.” 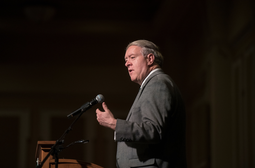