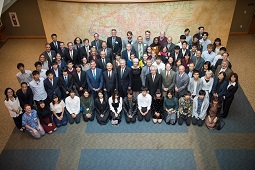 Ohio University (OHIO) was honored to welcome Chubu University President Osamu Ishihara and a delegation from the Japanese university to campus during the fall semester.

Chubu University is a longtime partner university, and the relationship between the two institutions dates back more than 40 years. Chubu and OHIO reconfirmed their commitment to the partnership at a signing ceremony during the October visit. President Ishihara and the Chubu representatives also took part in several important events on campus including:

“The partnership with Chubu University is more than just exchanges, facilities and special projects,” President Nellis said during the signing ceremony for the new agreement. “It is a friendship and a commitment to work together now and in the future in order to benefit our students, our universities and our communities.”

President Ishihara also gave a presentation on Chubu University during the ceremony, which was has held before a large audience that included numerous students from Chubu who are currently studying at OHIO.

The Presidential Panel discussion, which was part of the Inauguration Week activities for President Nellis, included:

Before a large audience in Baker Theater, the panelists discussed how Ohio University can best use its strong history and areas of excellence as it moves into this new era.

"Many of the issues that we face in southeast Ohio are not dissimilar with those of our international partners,” Titsworth explained during the event. He added that the depth of the university’s relationships, commitment and opportunity are essential to OHIO’s future.

“Being intentionally global can be hard at times…however, we cannot afford to suspend our work,” Sandal added.

“Ohio University’s colleges are a web of international and interconnected activities,” Stevens said. “Our connections at Ohio University and our capacity for problem-solving will help us make a positive impact.”

President Ishihara said that Chubu has seen numerous global changes in the world since the partnership with OHIO was first founded.

“Human sustainability is the issue to be solved now,” he said. He also discussed during the event how Chubu University approaches its own issues related to global education.

While discussing the importance of inclusivity during the event, President Nellis explained that the best way for OHIO to frame the need for inclusivity is around global intentions. He also discussed several areas that can be addressed.

“I would like to re-engage alumni and contacts around the world,” President Nellis said.

“We need to make sure that international students have a supportive and inclusive environment,” he added.

The panelists were asked a series of questions from the audience during the event, including one about the need for a globalized curriculum.

“A globalized curriculum is learning about, with and from people of a different culture,” Webster said.

“It is about increasing our cultural intelligence,” Sandal said. “It should be an ongoing conversation between us, our students and our administrators.”

The Chubu University visit to OHIO provided opportunities for numerous conversations and learning opportunities during the week for the representatives of both institutions. President Ishihara and the other Chubu officials connected with old friends at OHIO, while also being introduced to numerous faculty, staff and students. The meetings and special events provided opportunities to discuss new ways to strengthen the historic partnership, while the two universities also celebrated the successes of the collaboration since 1973.

President Ishihara also played a role in the Investiture Ceremony for President Nellis and also gave remarks during the Investiture Luncheon, further showing the strong bond between the two universities.

For additional information on the Chubu University visit to OHIO or on the partnership between the two institutions, please contact the Office of Global Affairs at 740-593-1840 or globalaffairs@ohio.edu.

For photos from the visit, please see this photo gallery. 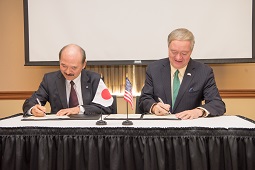