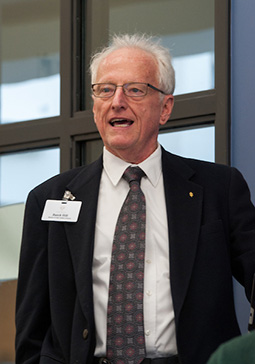 "It has to be one of the most fun things on earth to do," said Dr. Herman “Butch" Hill, Jr.  as he began to describe his time at Ohio University.

The director emeritus of the Cutler Scholars Program will be retiring at the conclusion of the fall semester.

The campus community is invited to attend a retirement celebration in his honor from 3 to 6 p.m. Friday, Dec. 15, in the 1804 Lounge in Baker University Center. Refreshments will be provided.

Soon after arriving in 1984 to serve as associate professor of electrical engineering, Dr. Hill said he fell in love with three things about the University: the avalanche of opportunities to be involved with students; amazing friends and colleagues; and, of course, the beautiful campus.

In his 33 years at the University, Dr. Hill has fulfilled many roles, both inside and outside of the classroom. He has worked hard to leave OHIO better than he found it. That includes teaching students in his classes, advising them in the Alpha Lambda Delta honor society for first-year students, serving on various boards and committees such as Faculty Senate and the March of Dimes Organizing Committee, and being a member of the Ohio University Credit Union’s Board of Directors.

Dr. Hill said the most prominent and influential part of his time at OHIO was with the Cutler Scholars Program. The program awards merit scholarships that educate capable and committed young people to be informed citizens, emphasizing the development of leadership and passion for civic responsibility.

He started as the associate director during the scholarship program's inception in 1996, after Ohio University President Emeritus Charles Ping asked him to be involved. He quickly agreed, eventually moving into the role of co-director, and subsequently, director.

"He helped make the Cutler Scholars Program what it is today and I cherish that very much, I mean we all do," Dr. Ping said.

As the director of the Cutler Scholars Program, Dr. Hill recruited and advised the new scholars. He also taught a colloquium each semester, which he was the heart and soul. This colloquium covered a new topic each semester in a range that was extraordinarily diverse.

"Butch showed a remarkable gift for getting students involved … and the talent to engage grew steadily over the years," Dr. Ping said. "He was just so good at it."

Dr. Hill said that being involved with the program has been rewarding, noting how he has watched many students from a variety of majors have the opportunity to grow and learn from one another.

He said he often found himself learning alongside the students and said he continues to learn from his students.

"Every day I stand in front of a group of students who teach me how little I know," Dr. Hill said.

Now that he is retired, the Massachusetts Institute of Technology alumnus and former Peace Corps member said he is most looking forward to traveling and running the Athens Marathon – two more things that he said the Cutler Scholars inspired in him.