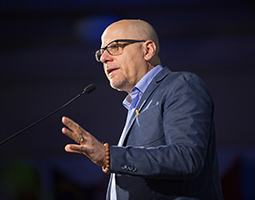 Best-selling author and award-winning journalist Eric Weiner kicked off Ohio University’s annual International Education Week (IEW) keynote address with one question – “Where are you?” – and one overall message – that the concept of place “is not dead.”

Members of the OHIO and local communities filled the Baker University Center Ballroom the evening of Nov. 16 to hear from Weiner, whose presentation shared the same title as his acclaimed book, “The Geography of Genius: How Place Shapes Us and Defines Us.”

In welcoming everyone to the event, Lorna Jean Edmonds, OHIO’s vice provost of global affairs and international studies, discussed the importance of the University on many of its creative thinkers, saying, “We produce our own group of geniuses from Ohio University.”

Carla Triana, president of OHIO's International Student Union, introduced Weiner, noting his many accomplishments and accolades. A columnist for BBC Travel whose work also appears in The Los Angeles Times, The New York Times and The Washington Post, Weiner spent many years working as a foreign correspondent for National Public Radio (NPR). While employed with NPR, Weiner traveled to and reported from more than 30 countries, covering wars and other major international events and earning an Angel Award for his coverage of Islamic affairs in Asia.

After years of covering wars, famine and disease and in hopes of finding a more positive story to report, Weiner began traveling the world searching for the smartest and happiest places. Those travels have resulted in three popular books, including The New York Times bestseller “The Geography of Bliss.”

In his IEW keynote address, Weiner focused on the importance of place as it relates to the growth of good, innovative ideas, arguing that certain places are better than others in fostering creative expression on a person-by-person basis and that places that create genius and creativity are subjective.

Weiner shared some of the insights he gained through his travels and his writing, focusing on the seven types of places that he said foster genius and happiness in different ways for different people. Those places include:

Lauren Smith, a sophomore studying history, said that Weiner’s “openness” was the most memorable part of his talk. “He’s a person who is not quick to judge. That’s what stuck out to me,” she said.

Bernhard Debatin, a professor in the E.W. Scripps School of Journalism, said that though Weiner’s talk was focused primarily on genius, his mind was more on happiness, noting his deep understanding of the direct connection between happiness and place. As a German-born immigrant, Dr. Debatin said his international travels have helped him understand the importance of exploring surroundings to find belonging, including in the Athens community.

“I have a strong relationship to place,” he said. 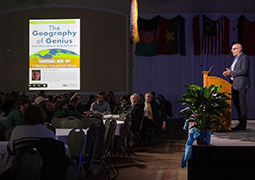