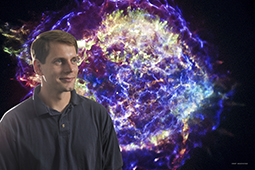 Ohio University astrophysicist Dr. Ryan Chornock is part of a large international team of scientists that reported a major new discovery about the cosmos today.

Six teams of scientists presented findings at a press conference organized by the LIGO Scientific Collaboration and Virgo Collaboration in Washington, D.C., at the National Science Foundation. The LIGO group made global headlines in early 2016 for the first detection of gravitational waves, which were generated by the merger of two black holes. Albert Einstein predicted the existence of gravitational waves — ripples in space generated by collisions or movements of cosmic bodies — more than 100 years ago.

Over the last two years, scientists have used gravitational waves as a clue to where they should train their telescopes to search for other phenomena, Chornock explained. Because black hole mergers don’t produce matter or light, researchers were specifically looking for another interstellar event that they could see as well as sense with detectors.

On Aug. 17, LIGO/Virgo detected such an event — a binary neutron star merger. Using the Victor Blanco telescope in Chile, a team of hundreds of scientists called the Dark Energy Survey captured an image of a bright object near the galaxy of NGC 4993. Other scientific teams around the globe immediately reported the same object; data from other observatories confirmed it as well.

Chornock is a member of a collaboration of scientists that include individuals with the Dark Energy Survey, led by Marcelle Soares-Santos of Brandeis University and formerly of the U.S. Department of Energy’s Fermi National Accelerator Laboratory, and a team of researchers led by Edo Berger of the Harvard-Smithsonian Center for Astrophysics.

In images captured by Blanco’s Dark Energy Camera, Chornock observed a white spot of light just northeast of the galaxy within a day of the neutron star merger detection. Two weeks later, the area in the images was dark. The object is the remnants of a neutron star, according to Chornock. When neutron stars collide, they produce radioactive materials that power a brief display of light—called a kilonova—before falling into a newly formed black hole, he explained.

Neutron star mergers are rare events, Chornock said, as they happen only every 10,000 to 100,000 years in our galaxy. Without gravitational waves, scientists wouldn’t have known where to look for them, he explained.

“It’s hard to go out and find them—you have to survey lots of galaxies,” he said. “The ability to survey large areas of sky is a recent development in the last decade or two.”

The discovery is notable, as it is the first time scientists have made a visual observation of a confirmed neutron star merger and have documented a visual counterpart to a gravitational wave detection. In a paper published today, the Dark Energy Survey team noted that the finding also can help scientists unlock bigger questions about the cosmos, such as what it is made of and how it is evolving.

“It provides a path to future research on the expansion of the universe,” Chornock said.

In addition, the observation answered another long-standing scientific question: What is the origin of very heavy elements such as gold, platinum or uranium? The Big Bang created hydrogen and helium, and generations of stars produced elements as heavy as iron, Chornock said, but the formation of the heaviest elements has remained unknown. Researchers have theorized that these elements could have been generated by either a neutron star collision or a supernova explosion. The Ohio University scientist is the lead author on a paper published today in the Astrophysical Journal Letters that reports signatures of those elements from the neutron star merger. The near-infrared spectral data gathered from neighboring Gemini South telescopes in Chile during the recent cosmic event confirm theoretical models, Chornock explained.

“This answers a more than 60-year-old mystery, and there are also implications for research in nuclear physics,” Chornock said, explaining that other scientists are trying to recreate the production of very heavy elements in accelerator facilities.

Chornock is an assistant professor in the Department of Physics and Astronomy in the College of Arts and Sciences. He joined Ohio University in 2014 after completing a postdoctoral research position at the Harvard-Smithsonian Center for Astrophysics.

“The discovery of merging neutron stars through both optical light and gravitational waves represents a profound advance in our ability to understand these exotic compact objects,” said Joseph Shields, an astrophysicist who also serves as vice president for research and creative activity and dean of the Graduate College. “Dr. Chornock’s contributions are a significant part of this story. His study linking these energetic events to the genesis of the heaviest elements additionally provides very important insight into how the universe achieved its current composition.”