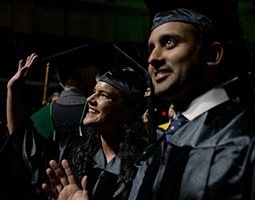 Addressing the largest-ever class to graduate from the Ohio University Heritage College of Osteopathic Medicine, Commencement speaker Richard A. “Rick” Vincent, M.B.A., advised the soon-to-be doctors to avoid letting their empathy erode as physicians by never forgetting the ideals of patient care that initially drew them to medicine.

“Don’t lose sight of why you became physicians,” he said during Saturday’s Heritage College Commencement at the Ohio University Convocation Center. “Remember why you started that journey in the first place.”

Vincent, who recently retired as president and CEO of the Osteopathic Heritage Foundations, was instrumental in OHF’s provision over the years of more than $123 million in support for the college, including the transformational Vision 2020 award of $105 million in 2011. He told graduates he was fortunate over his nearly 50-year career to be able to indulge his passion for advancing osteopathic medicine. “I believe it may have been my destiny to work on your behalf,” he said.

Vincent also advised graduating Heritage College students to find their moral compass as physicians and to practice humility; to treat patients as they would wish themselves and their families to be treated; to take care of themselves in body, mind and spirit; and finally, to “along the way, have some fun.”

Saturday’s Commencement, the 39th for the medical college, was a landmark in that the 178 graduates include the first 48 from its Dublin campus, which opened in 2014. Next year will see the first graduates from the Heritage College campus in Cleveland, which launched the following year.

Heritage College, Dublin, Dean William Burke, D.O., a 1988 alumnus, told the Dublin cohort that they will “always hold a special place in my heart. Thank you for believing without seeing, as you applied for a medical school campus that was still being developed.”

Graduating student Brandon Arehart, 2018 class president at the Heritage College, Dublin, offered his classmates career guidance from the words of both movie pugilist Rocky Balboa – “It ain’t about how hard you hit. It’s about how hard you can get hit and keep moving forward” – and Dr. Seuss, who advised, “There's no limit to how much you'll know, depending how far beyond zebra you go.” Great physicians, Arehart suggested, are those who go beyond zebra: “They go beyond the X’s and O’s in their scientific playbook… They don’t just treat. They heal.”

Ohio University President M. Duane Nellis, Ph.D., told the graduates, “I firmly believe that your work will make a real difference in the lives of those you serve.”

Heritage College Executive Dean and OHIO Chief Medical Affairs Officer Ken Johnson, D.O., praised the students for their hard work and professionalism, adding that “It is you, the class of 2018, that will lead the transformation of patient care and carry forward the rich traditions of our college and our profession. I have no doubt that you are totally up to the challenge!”

Johnson noted that the college’s valued traditions include its strength in producing primary care physicians who practice in Ohio. About 47 percent of the Heritage College class of 2018 will be doing residencies in primary care fields and about 62 percent of the class will be staying in Ohio for their residencies. The class also includes the first four graduates of a D.O./M.B.A. dual degree program, and 13 members who are pursuing careers as military physicians, who were recognized during Saturday’s ceremony. 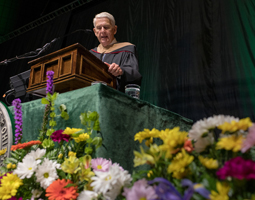 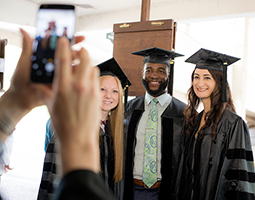