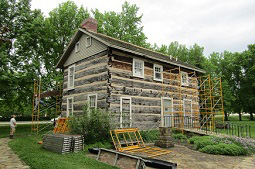 Step inside Bingham House, the two-story log cabin at the southwest corner of Richland Avenue and Shafer Street, and you may imagine yourself transported into a bygone era. The thick log walls witnessed the early days of Athens and the establishment of Ohio University. Visitors to Athens might not notice the change to this landmark building, but students, faculty, and staff who are familiar with the campus will surely notice the shiny new copper gutters and new roof on the cabin, which houses Ohio University’s Office of Sustainability and the Visitors Parking Registration Desk. The building adds an air of historical charm to campus, but its old roof of cedar shakes had been failing to keep out water and numerous leaks were beginning to cause damage inside the building.

Built around 1803 and first located on South College Street, Bingham House is believed to have been built by, and the home of Silas Bingham, a Revolutionary War hero, successful businessman, and the first sheriff of Athens County. The house, with its hand-hewn yellow poplar logs, has served as a tavern, inn, and Athens County’s first courthouse, according to the book “Athens” by Richard Straw.

The log structure was the residence of Robert G. Wilson, the third president of Ohio University. John Newton Templeton, who became the University's first black graduate in 1828, also lived there with President Wilson and his family.

In 1853, the house was moved to 118 E. State Street. In 1987, it was moved again to its present site after the community, campus, and Athens County Historical Society and Museum raised the funds for it to be dismantled and relocated.

Over the years, numerous renovations changed the appearance of the house, but its architectural structure remained largely unchanged, according to a brochure written by local historian Marjorie Stone to commemorate the building’s dedication in 1987. “It is representative of the log structures and workmanship of the more affluent among the early settlers,” wrote Stone, who led the campaign to save the structure in the 1980s.

“Bingham House not only represents the history of Athens and Ohio University, but it signifies the present and future value of the town-gown relationship as both the local and campus communities have worked together to ensure that the structure is saved,” said Sam Crowl, sustainability project specialist in the Office of Sustainability.

According to Vanessa Thiel, a junior majoring in urban planning and sustainability, Bingham House is a great place to work not only because it’s home to the Office of Sustainability, where she is employed as a sustainability implementation coordinator, but also because it serves as a great catalyst for connections. Thiel said she did not know much about Bingham House’s history, but learned about it as she helped field questions from callers or visitors. Thiel enjoys the interactions with people that arise from working in a historical building and said that community members, alumni, and students stop in to ask questions about the building. “It is a great way to talk about Ohio University’s ‘hidden gem’ and get to have interactions with all sorts of different people,” Theil added.

The house is listed on the National Register of Historic Places and is one of the few remaining two-story log buildings in southeastern Ohio. The furniture and accessories in the first floor of the building were made between 1800 and 1860, and come from early Athens homes or were collected in southeastern Ohio.

Jeff McGlamery coordinated the recent repairs in his role as assistant director of building trades. According to McGlamery, Bingham House was overdue for roofing work with a number of outstanding work orders submitted because of leaks that were beginning to damage the interior of the building. McGlamery said he hopes the new roof, which is made of a composite material rather than wood, like the cedar shakes that were removed, will last for 30-40 years.

“The leaks, isolated to the eastern side of the roof, started last fall and were becoming progressively worse over the spring, particularly with the weather we’ve had,” said Crowl. “We’ve used a handful of containers to catch the dripping water over the past few months. We also noticed that increasingly more of the cedar shakes were showing up in the lawn after heavy rain and wind events.”

Projects like the Bingham House roof replacement are often bid out to external contractors, but McGlamery, who supervises the carpentry and sheet metal shops, saw this as an opportunity to showcase his team’s masonry, carpentry, and metal-working skills.

“This is a significant repair for FMS as it is the first where we are using recently certified in-house personnel to erect and use scaffolding,” said Steve Wood, associate vice president for facilities management and safety. “This additional capability lets us expand opportunities for our in-house personnel to address maintenance issues, and decrease deferred maintenance, campus-wide. Additionally, we're able to support the longevity of Bingham House, a historic landmark for the campus and community.”

Office of Sustainability staff moved in to Bingham House in 2013 and are happy to see the building receiving much-needed repairs. “We love our office space in Bingham House, and are overjoyed that the University is protecting this historic asset with a new roof and copper gutters,” Crowl said. “By installing synthetic shake tiles the project team is helping to retain the look of 200 years ago while hopefully enabling the house to continue to be a unique, useful space for another two centuries or more.”

McGlamery praised the work of the FMS staff who performed masonry repairs to the building’s chimney, and removed and replaced the failing roofing and gutters. That team included Roger Milstead, Emmette Sanders, Jason Jordan, Everett Clark, Anthony Pennington, and Denton Guthrie. “It’s something I’m proud to be a part of,” said McGlamery. Not only was the team working to repair and replace the roofing, they were also striving to make the building look better than it did before, according to McGlamery.

Aside from ensuring that the roof replacement work did not interfere with the work going on inside Bingham House, McGlamery and his team have focused on safety. “You’re up pretty high working on a good slope of a roof,” he said, adding that the old cedar shakes were covered in moss and therefore slippery. Workers used scaffolding and safety harnesses as they removed the old roofing materials and replaced them with new ones. 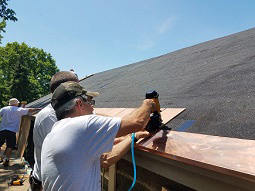 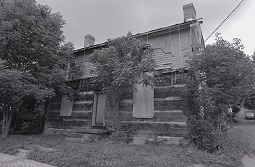 Photo courtesy of: Mahn Center for Archives and Special Collections at Ohio University LibrariesBingham House in its previous location on E. State Street