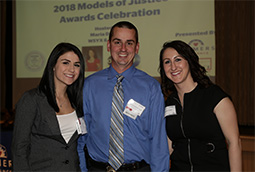 Castor said she nominated Det. Austin after witnessing his work over the past two years with sexual assault survivors. She praised him for giving 110 percent to each investigation and said she was impressed by how he maintains a trauma-informed approach throughout the process, which helps the survivor feel as if they are maintaining some control in the investigation.

"Det. Austin always made sure to give the power back to her (Sivy) in any way he could. He was as transparent as possible and was as committed to seeking justice in this case as myself, Brie and her parents," Castor said. "The long process ended in December 2017 when Brie's perpetrator accepted a plea bargain and was sentenced to prison."

Castor said she nominated Sivy because she persevered through a lengthy investigative and prosecutorial process for herself and other survivors who may not have received the justice they wanted from the legal system.

"Brie remained an advocate for herself and would speak up when she felt that she wasn't being heard or respected by a person or institution …" Castor said. "She has taken a truly awful experience that happened to her and is using it to help others."

Castor also credited Sivy for organizing Ohio University’s March 6 "Start by Believing" event, which attracted more than 200 attendees. As the moderator, Castor led a conversation between Sivy and Det. Austin that demonstrated how they worked together throughout the investigation.

Castor said the event was designed to inform attendees how they can be better supporters of sexual assault survivors.

"This impact would not have been possible if it weren't for Detective Austin's approach and Brie's bravery and commitment," Castor said.

Sivy said she couldn't help but feel unworthy of this award in the weeks leading up to the event because she didn't feel courageous throughout her battle with being a survivor of significant sexual abuse.

"This feeling has only seemed to increase after hearing the stories of everyone on this list tonight," Sivy said. "I will not only be accepting this award for myself – I am only one among many and there are survivors far more courageous than I am."

Sivy thanked all of the people who supported her during this difficult time, including her family, friends, Det. Austin and Castor.

"Their support, love and encouragement has kept me strong and allowed me to heal more fully than if I had gone through this alone. … I recognized that I am one of the fortunate ones," Sivy said.

Det. Austin said he was "very honored" to share the award with Sivy and that he was glad that she had the courage to speak publicly about it at the "Start by Believing" event.

"She has been amazing in the face of all kinds of adversity," Det. Austin said. "I think it's pretty powerful for the police, a survivor and an advocate to get on stage and talk through the challenges and successes that come with sexual assault and criminal investigation. I hope we're able to help others better respond to those in need and for survivors to feel more supported."

Det. Austin also gave credit to Castor, whom he lauded for working alongside them from day one.

"Kim Castor is the unsung hero," he said.

For more information about the Survivor Advocacy Program, visit https://www.ohio.edu/survivor/. 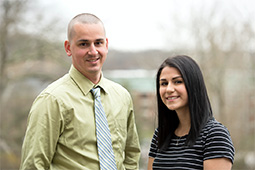 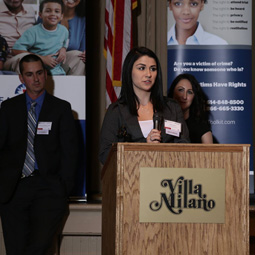 Photo courtesy of: Det. Mathew AustinBrie Sivy tells the audience her story during the awards ceremony on April 12