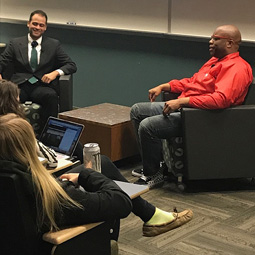 Columnist and managing editor at RESPECT. magazine, Brandon “Scoop B” Robinson, talked about what it was like being a child prodigy, and what it takes to be successful in today’s industry during the final installment of the E.W. Scripps School of Journalism’s “90 Minutes Series” in March.

Robinson, who is most known for his contributions to CBS Sports Radio and The Source magazine, got involved with the media long before he received his master’s degree in journalism from Hofstra University.

When 12 years old, Robinson co-hosted a children’s radio show called “Nets Slammin’ Planet” with now-retired New Jersey Nets player, Albert King. The show would go on to be featured on shows like “NBA Inside Stuff”, “Fox Sports” and more.

Since then he has gone on to become an entertainment and sports writer for Slam magazine, Vibe and Ebony, and hosts his own podcast on ScoopBRadio.com.

“I was ahead of the curve because I hung out with older people,” Robinson said. Reflecting on how far he has come since age 12, he said he believes he is right where he needs to be. “The growth is what I’m a fan of more so than being ahead of the class,” he said.

Robinson said that the biggest lesson he has learned in his career is to not let “no’s” deter you. His biggest driving factor is to not fail.

“Yes and no,” Robinson said when asked if being a child prodigy gave him more desire to succeed. “I think it pisses a lot of 40- and 50-year-olds off because they’re looking at you like who is this kid and what makes him special. But that’s what makes me want to go even harder.”

The way journalism has changed is something Robinson also commented on. While people used to specialize in an area or two, now journalists are being asked to do much more.

“In today’s game, you have to be able to shoot, edit, sideline report and anchor.” he said.

Although competitive, Robinson preached patience. In his opinion, people quit too quickly, as they want everything too quick. For him, it’s comparable to people wanting a fast meal rather than a home-cooked one. “People think success is instantaneous,” he said.

When asked about Fox anchor Laura Ingraham’s “Shut up and dribble” comments toward LeBron James and Kevin Durant, Robinson said he thought the message was insensitive and misinformed. Due to their status and background, Robinson stated that there are few better people than athletes of James and Durant’s caliber to speak out about social injustice.

Robinson mentioned that while some athletes like Charles Barkley will state that they are not role models, he thinks most athletes want to be that and it is a responsibility that should be bestowed upon them.

“Whether they embrace it, is up to the athlete,” Robinson said. “People think athletes are dumb but that’s not true. Shut up and dribble means you don’t have anything to offer me besides entertainment.”

Throughout the night, Robinson provided the audience with stories ranging from Allen Iverson to Kobe Bryant. He even touched upon the media’s obsession with O.J. Simpson and Donald Trump. Those stories made quite the impression on a few people.

Moderator and junior journalism major Steven Hernandez said he most enjoyed how open Robinson was and the stories he told. “It motivates me as a broadcast journalist to go out and get stories and meet new people,” he said.

The “90 Minutes” series was developed last academic year to create discussions on politics, racism, sexism and global topics. The series exposes students to people who have faced adversity or who have seen bigotry and discrimination happen for others, but have stepped forward to address those social and cultural wrongs.