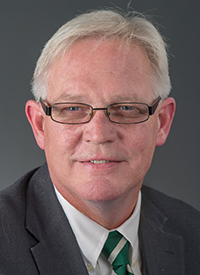 Photo courtesy of: Ohio University Communications and MarketingDennis Irwin, dean of the Russ College of Engineering and Technology, will be retiring from Ohio University, effective June 30, 2019.

Interim Ohio University Executive Vice President and Provost Elizabeth Sayrs has announced that Dennis Irwin will be retiring as dean of the Fritz J. and Dolores H. Russ College of Engineering and Technology, effective June 30, 2019.

“Dr. Irwin is leaving a lasting legacy, not only at Ohio University and the Russ College, but also throughout the state, national and international engineering community,” Dr. Sayrs said. “His dedication to his profession, our students and the University community shines through in everything he does. Dr. Irwin’s commitment to the mission of Ohio University and to the Russ College’s vision to create for good has positioned the college as a leader among its peers and set it and its graduates on a course for future success.”

An Ohio University faculty member since 1987, Dr. Irwin served as chair of the Russ College’s School of Electrical Engineering and Computer Science prior to be appointed dean of the college in 2002. As dean, Dr. Irwin facilitated the largest charitable gift ever made to a public engineering college: a $124 million bequest from the estate of Fritz and Dolores Russ. His accolades also include crafting the initial vision for OHIO’s Academic and Research Center; developing several new programs; and helping to bring the world’s premiere space education program, International Space University, to Ohio University and serving as chief host for its Summer Space Studies Program in 2015. Under Dr. Irwin’s leadership, the Russ College has secured more than $225 million in sponsored research, has roughly doubled its enrollment, and is poised to nearly triple its learning and research space.

An electrical engineer by trade, prior to joining OHIO, Dr. Irwin was a program manager for Logicon Control Dynamics Company in Huntsville, Alabama, where he facilitated projects sponsored by NASA, the United States Air Force and the United States Army. He is a Fellow of the National Society of Professional Engineers, an Associate Fellow of the American Institute for Aeronautics and Astronautics, and a Senior Member of the Institute of Electrical and Electronics Engineers, and has served in leadership positions on several professional organizations.

“It has been an honor to serve the Ohio University community and to be a part of the Russ College family for the past 30-plus years,” Dean Irwin said. “I am proud of our collective accomplishments and particularly of our demonstrated commitment to student success with an eye toward using our time and talents to serve the greater good. Although my time dedicated to leading the Russ College will be coming to a close, I look forward to returning to teaching at the college after I retire. Ohio University and the Russ College have defined my life's work, to my great benefit and satisfaction.”

Plans for a national search for the next dean of Ohio University’s Russ College of Engineering and Technology will be announced at a later date.