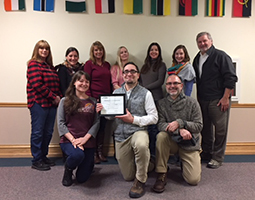 Faculty and staff in the Ohio Program of Intensive English pose for a photo with the certificate they received from the Commission on English Language Program Accreditation acknowledging the program’s initial five-year accreditation.

Ohio University’s Ohio Program of Intensive English (OPIE) ended its 50th anniversary year on an especially high note, receiving the highest degree of initial accreditation from the nation’s leading accrediting body for intensive English programs and being one of 17 institutions nationwide selected to host a Brazilian teacher-training program.

Established in 1967, OPIE was the first university English language program in Ohio and continues to be one of the leading English programs in the United States. Over the past 50 years, thousands of students from throughout the world have enrolled in OPIE courses on the Athens Campus designed to improve their English and prepare them linguistically and culturally to live and study/work in the United States. OPIE’s work has resulted in countless international connections for Ohio University and a more diverse campus and community.

The OPIE office was notified in mid-December that the Commission on English Language Program Accreditation (CEA) had granted the program a five-year initial accreditation, the highest degree of initial accreditation awarded by the accrediting agency. The decision followed an approximately two-and-a-half-year comprehensive review of the program that included the development of a self-study report and a three-day site visit from a CEA review team.

A specialized accrediting agency focused on post-secondary intensive English programs and institutions, the CEA’s mission is to promote excellence in the field of English language teaching and administration as well as to protect the interest of students through accreditation of English language programs and institutions worldwide. With its accreditation, OPIE joins the ranks of 334 sites worldwide and only eight sites in the state of Ohio.

“This achievement means many things for OPIE and Ohio University, but, most importantly, it means that we’re assured that our program meets the highest professional standards,” said Gerard Krzic, who has served as director of OPIE since 2005. “If a student wants to come and study through OPIE, they’re going to be assured of a quality experience. I think we had that already, but now it’s officially confirmed and recognized by the highest professional accrediting organization of its kind.”

Dr. Krzic noted that the accreditation is the result of efforts made by the entire OPIE team as well as individuals employed in OHIO offices that routinely interact with OPIE, including the Office of Admissions, International Student and Faculty Services, and the Linguistics Department. He extended special thanks to Becky Challenger, an OPIE associate lecturer and assistant director for outreach and curriculum who served as the accreditation self-study coordinator and spearheaded the accreditation process.

“It is such a relief to see the formal confirmation of the quality of our program reflected through this accreditation decision,” Challenger said, noting that the accreditation process began in June 2015 when OPIE submitted its application to the CEA.

According to Challenger, the self-study part of the process began in January 2016, culminating in a self-study report OPIE submitted to the CEA in March 2017.

“There were 44 standards that we had to respond to that ranged from our curriculum and student services to our administration, fiscal capacities and internal review processes,” Challenger said. “It was an intense process that required comprehensive responses to the standards that the CEA had developed as being best practice standards in the field of intensive English programs.”

OPIE divided the CEA standards into committees that were tasked with drafting the responses.

“This recognition builds on OPIE’s already well-established legacy,” Dr. Krzic said. “It’s another component of Ohio University that is being recognized internationally, and I think it will help us with the prominence of our name, with our visibility and with the recruiting of students.”

Over the course of its 50-year history, OPIE has become well known for the outstanding teacher-training programs it has hosted for educators from throughout the world.

This semester, OPIE is one of only 17 programs nationwide selected to host the PDPI Brazil English Teachers Program. Administered by the Institute of International Education and funded by the Brazilian government, the program is part of the Brazilian government’s strategic plan to improve English language teaching and teacher training in all of Brazil’s states.

Nineteen Brazilian elementary, middle and high school English teachers arrived on the Athens Campus on Jan. 14 to participate in the six-week program dedicated to the study of the English language, the practice of English teaching methodology, and exposure to U.S. society and culture. The teachers are residing in Weld House on OHIO’s South Green and attending English fluency, methodology and technology classes taught by OPIE faculty.

The teachers will also be engaging in many social and cultural activities on the Athens Campus, in the community and around the state.

“They are going to visit the elementary schools, middle school and high school in Athens,” Dr. Krzic said. “They will also be visiting the Ohio Statehouse and the Ohio Department of Education and doing a weekend homestay in Cincinnati through the Greater Cincinnati World Affairs Council.”

Andrea Johannes, an associate lecturer and assistant director of student services in OPIE, is facilitating the group’s on-campus cultural exchange activities. Among those activities is an abbreviated version of the “Ongoing Orientation Workshop Series” OPIE requires of its intermediate level students.

“These workshops are our way of helping to support our students beyond their initial orientation session,” Johannes explained.

The workshops are designed to help program participants adjust to life in the United States and at OHIO and make meaningful connections with Americans as well as to encourage them to participate in events on campus.

According to Johannes, four of the series’ six workshops include working with Patton College of Education students enrolled in Assistant Professor of Teacher Education Michael Kopish’s global education class. Those workshops will feature an intercultural interview, a virtual cultural tour of the Athens Campus, a global issues discussion and a culture of food discussion and potluck– all designed to allow the students to share and discuss their cultural backgrounds and identities.

“We really try to foster an environment that gets our international and domestic students to get to know one another and take advantage of all of the enriching programs occurring in our community,” Johannes added.

Among the activities the Brazilian teachers will be encouraged to participate in are athletic events and OHIO’s Performing Arts and Concert Series. Dr. Krzic noted that his office is always looking for ways to facilitate community interaction with OPIE students, and individuals with suggestions can email him at krzic@ohio.edu.

“My first study abroad experience was in Brazil when I was an undergraduate,” Dr. Krzic said, “so, for me, it’s always a delight when Brazilian teachers visit our community. The University has ties to Brazil, but having these teachers here strengthens our ties and will add so much energy not only to Gordy Hall but to the greater Athens community. To me, more than ever – and I’m not being political – but any way we can foster interaction between people from outside the United States and Americans we ought to.” 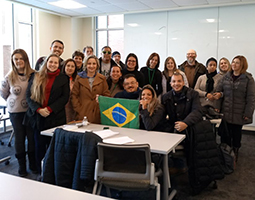 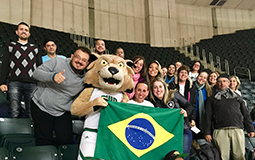 Photographer: Gerard KrzicSome of the Brazilian teachers participating in the PDPI Brazil English Teachers Program pose for a photo with Rufus while attending the Ohio University Men’s Basketball game at the Convocation Center on Jan. 16.