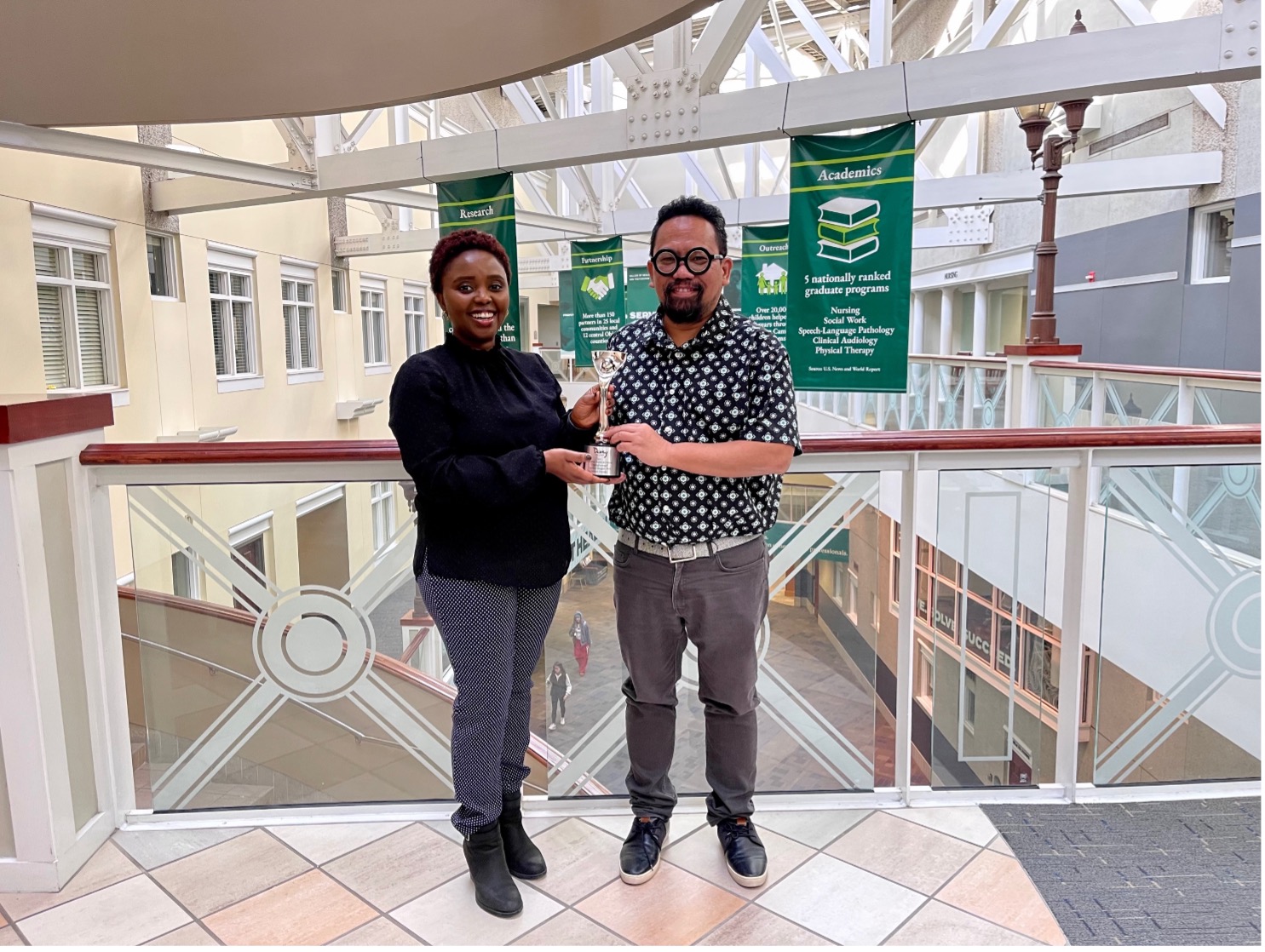 Kingori and Durado with the Davey Awards Plaque.

Two Ohio University faculty members received awards in recognition for their work aimed at preventing and reducing stigma around HIV from Graphic Design USA and the 2022 Academy of Interactive and Visual Arts, also known as the Davey Awards.

Caroline Kingori, associate professor of community and public health, and Adonis Durado, assistant professor in the School of Visual Communication, as well as core members of the Game Research and Immersive Design (GRID) Lab, were awarded the Designing for Good category from Graphic Design USA and the silver award in the General Health and Fitness category from the Davey Awards for their choose-your-own-adventure film intervention “DatingForward,” which aims to reduce HIV stigma and increase engagement in HIV prevention among immigrant and refugee youth ages 18-25 in Columbus. The project was funded by the Columbus Foundation.

“I am especially glad about the two awards because, as a visual communicator and person of color, the recognition from industry organizations solidifies that this work is not just about the craft, but the importance of social change,” Durado said.

The Davey Awards honors the achievements of what they refer to as “Creative Davids” who derive their strength from big ideas, rather than stratospheric budgets. The category in which they won from Graphic Design USA is awarded to works that feature graphic communications aimed to advance positive social and environmental action and social justice impact.

“Development of a contextually appropriate gaming technology intervention to increase HIV prevention and treatment knowledge is vital in engaging youth, given that adolescent and young adult populations ages 15-25 represent over 30 percent of new HIV infections globally. Furthermore, little is known about barriers to accessing sufficient HIV knowledge and services among immigrants,” said Kingori, who also serves as interim associate dean for Research and Faculty Affairs.

Choose-your-own-adventure interactive films are videos where the player decides what the main character will do next using choices that pop up at the bottom of the screen. The simulation game incorporates evidence-based concepts from various behavior change theories, including environmental influences around a behavior, perceived severity, self-efficacy, behavioral capability, social norms, expectations and perceived behavioral control.

“Interactive technology attempts to engage the audience using active decision-making which can be utilized to change behavior through reflection and judgment assessment,” Kingori said. “Interactive stories are presented in the form of video games, virtual reality and immersive film/video and have shown to be effective in changing behavior.”

This project was a collaborative effort with OHIO’s GRID Lab and Ethiopian Tewahedo Social Services (ETSS), a well-renown organization in Columbus serving new Americans and providing support to immigrant and refugee youth.

“The collaboration between Ethiopian Tewahedo Social Services and the College of Health Sciences and Professions supports the college’s vision and mission of partnering and serving communities to build collaborative, scalable solutions capable of meeting the era’s biggest crises and challenge,” Kingori said. “ETSS’s partnership is vital to the success of this project because it serves the target community as a focal point of integration for immigrants, refugee families, and low-income individuals in central Ohio to improve the quality of their lives. I am also proud to serve as an ETSS board member.”

“Educating youth in an interactive fun game style is innovative and creative. It was a fun interactive game but was very educative of teaching specially our new American youth on this sensitive matter of sex education for the most dangerous killer virus. I thank you Ohio University and especially Dr. Caroline Kingori and her team for their consistent and creative approach,” said Seleshi Ayalew Asfaw, president and CEO of ETSS.

The GRID Lab provided the technical power and expertise under the leadership of Durado and Eric R. Williams, who specializes in new media storytelling and oversees the cine-VR arm of the lab.

Williams proved instrumental in shaping the technological aspect of the project to match Kingori’s vision. However, William’s took a sabbatical and stepped away from the project, recruiting Durado to assume responsibility.

This project was formulated as part of Kingori’s training as a fellow in the Columbia University HIV Intervention Science Training Program, a multidisciplinary training program funded by the National Institute of Mental Health which seeks to develop and facilitate the growth of scientists from underrepresented groups conducting HIV-related dissemination and implementation research.

“I am grateful for the opportunity to work with such an interdisciplinary team to bring to life a project that was challenging to put together, but has emerged into a novel creative phenomenon,” Kingori said.

Beth Tragert, director of finance at the College of Health Sciences and Professions, and Marlene Shostak, department administrator at the School of Visual Communication, were also essential figures in the project by ensuring the production team stayed on budget. Furthermore, the support of Dean McCarthy helped provide funds for additional costs.

“Dr. Kingori’s participation and leadership with Ethiopian Tewahedo Social Services is representative of the kinds of partnerships College of Health Sciences and Professions values. The ability of the GRID Lab to help tell compelling visual stories is inspiring to faculty in the College of Health Sciences and Professions and a huge asset to our collective work leading positive change in challenging and complex environments,” McCarthy said.