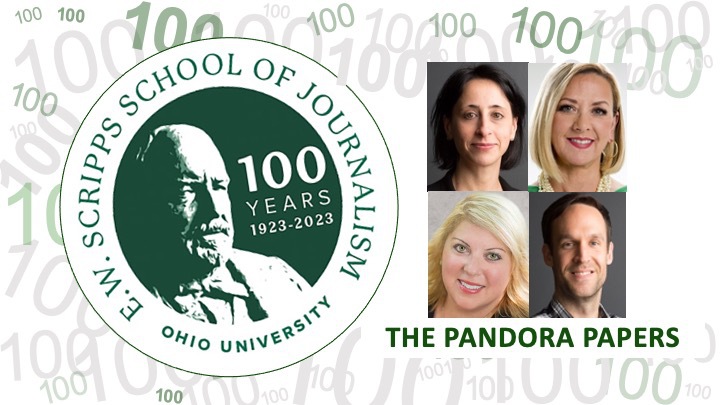 It’s one of the biggest stories in history, and four of the journalists who helped tell it will join the E.W. Scripps School of Journalism for the first event of the school’s centennial celebration on Jan. 26 at 7 p.m. in Schoonover Center Room 145.

The Pandora Papers is an ongoing investigative project examining 12 million confidential files by 600 journalists in 117 countries. The project highlights the offshore financial practices of hundreds of politicians, billionaires, oligarchs and criminals around the world, including some of Russian President Vladimir Putin’s associates. It also shows how dubious financial practices affect everyone beyond just lost tax revenues.

It is coordinated by the International Consortium of Investigative Journalists (ICIJ).

“We started the countdown to the centennial five years ago,” Dr. Eddith Dashiell, director of the E.W. Scripps School of Journalism, said. “We’re excited to start the celebration and excited to start it with a panel of the world’s best journalists who helped cover a story that affects every person in every community across the world.”

The four journalists have extensive experience in the field of journalism, having worked all over the world in various positions.

Scilla Alecci is an investigative reporter and video journalist for the International Consortium of Investigative Journalists. A native of Italy, she worked in Japan for several news organizations, including Bloomberg. Alecci was part of the Pulitzer Prize-winning team that reported The Panama Papers, about which she published a book in the Japanese language.

Debbie Cenziper is an investigative reporter at ProPublica who spent more than a decade on the investigation team at The Washington Post. She was previously a reporter at the Charlotte Observer and Miami Herald. In Miami, she covered housing corruption that led to criminal convictions and a 2007 Pulitzer Prize in local reporting.

Will Fitzgibbon is a senior reporter for the International Consortium of Investigative Journalists. He coordinated ICIJ’s Fatal Extraction investigation that examined the impact of Australian mining companies in Africa. Fitzgibbon also reported on The Panama Papers. His work has been published by The Guardian and The Observer in London.

“The E.W. Scripps School of Journalism consistently ranks as one of the top 10 in the United States,” Dashiell said. “This event is the perfect way to start the yearlong celebration of our alumni who have been the history writers and history sense-makers of the past 100 years.”

In 1923, Raymond Slutz, an assistant professor and Ohio University graduate, offered the University’s first journalism course in the English Department. The following year, George Starr Lasher was hired as the director of the Department of Journalism, which was part of the College of Liberal Arts.