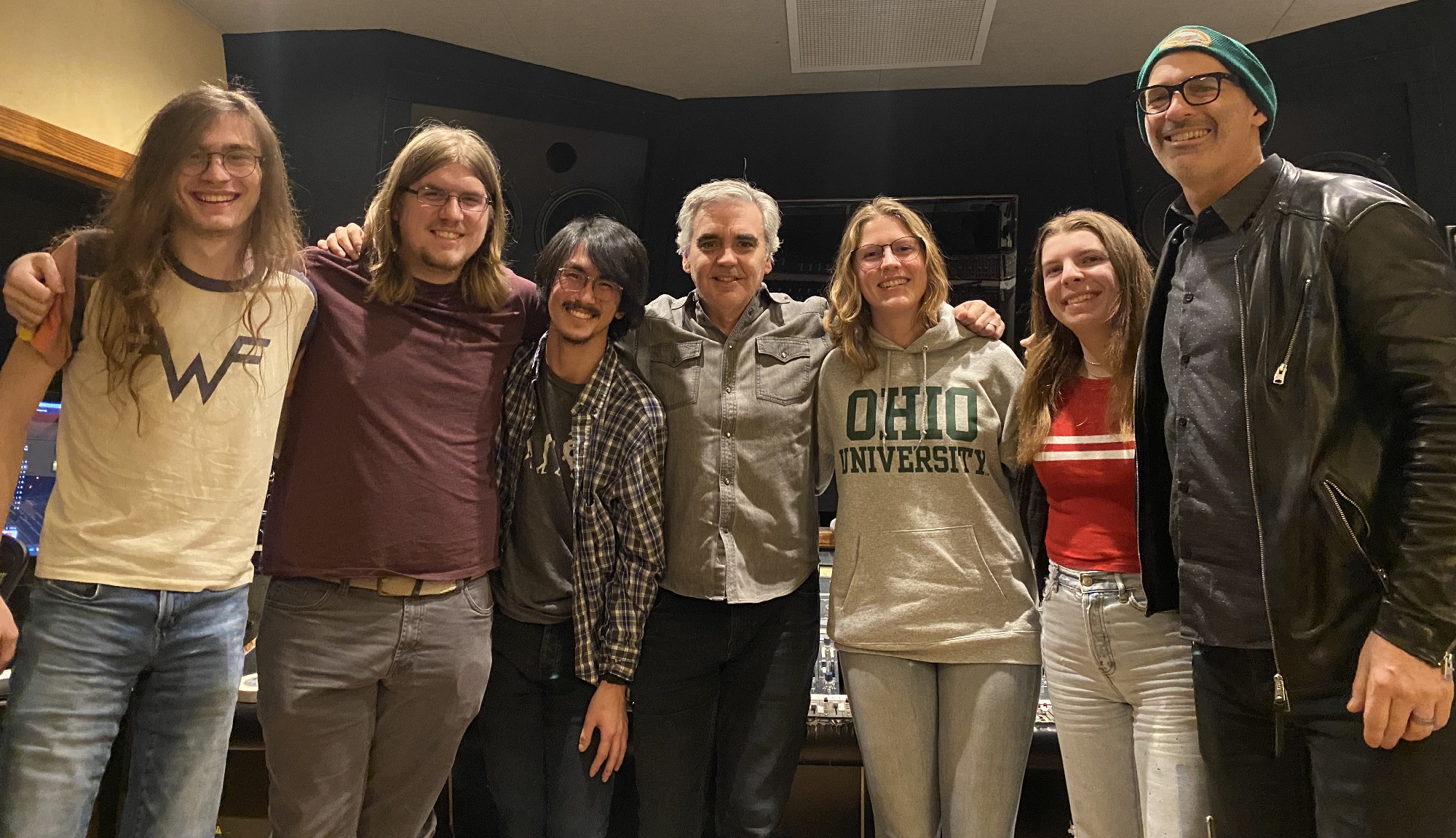 Ohio University students spent a week at the Public Hi-Fi Studio, which is run by Jim Eno.

Aspiring music producers know there is a lot to learn, from mastering studio technology to building trust and creative relationships with artists. The Ohio University students who participated in the most recent music production master class in Austin, Texas knew the class would give them opportunities to build skills in both those areas. What they didn’t expect was the friendly and welcoming atmosphere they found.

“This is a very non-judgement environment,” said senior music production and recording industry (MPRI) major Jessie Laub. “We were able to learn so much because we were not really afraid to fail. And they always had our back in trying to figure out how to place mics or how to set up mics or anything that was more of a technical aspect. They were able to hold our hand along the way and to show us all these new, interesting techniques with their process.”

The class spends a week at Public Hi-Fi Studio, which is run by Jim Eno, a producer and the drummer for the Grammy-nominated rock band Spoon. Senior MPRI major Arman Lopeman is the president of the OHIO Audio Engineering Society. He said he appreciated the unique perspective Eno brings to the recording process.

“I got to see a whole new approach to music,” Lopeman said. “And I got to learn a lot of new things that I've never considered or been able to experience before—for example, all the work with tape. I found Jim's approach really interesting and I'm really stoked to try to get some of those ideas into my own work.”

Josh Antonuccio, director of the School of Media Arts and Studies, facilitates the master class series and travels with the students to Austin. He said the various opportunities of working with digital and analog technology enriches the students’ experience and diversifies the skills they learn.

“Students got to work with four different artists, and with each a different production methodology was used. Students got to venture beyond digital to work on a variety of analog tape machines. That process of tracking with tape is totally different than digital, with a much more intentional approach to capturing things live. As such, they got use an analog workflow with both a singer/songwriter and a 10-piece band."

Junior MPRI major Evan Johnson was grateful for all the people at Public Hi-Fi, from the production staff to the musicians.

“The environment in the studio was really nice because we could make mistakes and we could not know stuff and all the people around us were very accepting of that and everyone was just very willing to help all students at any time,” he said. “Being around the artists was also really cool because they were all very good and it was nice to be around people who were really good at what they do."

The group worked with four artists: the Tender Things featuring Jesse Ebaugh of Heartless Bastards, Walker Lukens, Ley Line, and the Ghost Wolves. Two of the songs were recorded for the podcast Song Confessional.

Public Hi-Fi has served as flagship studio in Austin for many years, and has served some of the biggest artists including Shawn Mendes, Lady Gaga, Miguel, and the Jonas Brothers, as well as Eno’s own band Spoon. Their 2022 release “Lucifer on the Sofa” was recorded at Public Hi-Fi and is nominated for a Best Rock Album Grammy this year.

“This year marks the seventh year of my production master class with (OHIO), and as history has shown, five great students came down to participate,” Eno said. “The bands who recorded during the week loved the recordings and the process, which says a lot about the quality of students in this year’s program. As always, I am very excited about the next group of students to come down in 2023.”

Antonuccio said the series is able to offer a scope of experience that is especially valuable.

“For these students, it’s a world of opportunity for hands-on learning and getting to see the applications across the multiple songs produced,” Antonuccio said. “They get their hands on a plethora of music technology.”

“This has been one of most informative experiences I've had.,” Porter said. “I wish we could just keep doing this longer. I wish we had another week.”