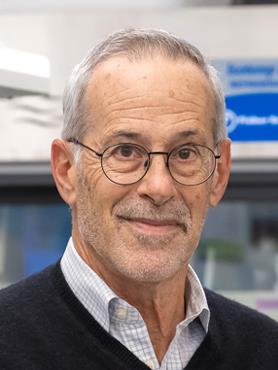 Ohio University and the National Academy of Engineering (NAE) announce David Walt as the recipient of the 2023 Fritz J. and Dolores H. Russ Prize. Walt is honored for the development of microwell arrays that greatly advanced the fields of genomics and proteomics.

Awarded biennially, the Russ Prize recognizes an outstanding bioengineering achievement in widespread use that improves the human condition. Along with the award, Walt will receive a $500,000 cash award and a commemorative medallion.

“David’s development of microwell arrays has had a profound impact that affects literally millions of people in multiple ways, from broadening genetic research to detecting cancer treatment to improving crop performance,” said NAE President John L. Anderson. “Microarray technology has had a tremendous commercial impact as well and is used to provide genetic information for the millions of customers using genealogy products and services."

In the genomics field, the microarrays developed in the Walt Laboratory are used by thousands of researchers to discover genetic variation. The microarray and sequencing platforms are being used by many companies and hospitals to detect and diagnose cancer and assist in finding the right therapeutic regimens that will target the tumor. Current commercial products are used to identify potential genetic defects in early-stage embryos before implantation for in vitro fertilization. The innovation is also used to identify metabolic profiles of individuals who will receive certain drugs so that they can be dosed properly, and to investigate human traits and diseases.

Microarrays are also used extensively in agriculture for both plant and animal breeding to optimize traits and maximize production. For example, they are used to study and improve crop disease resistance to produce more food on a given amount of land; for animal breeding to ensure that it is both successful and produces offspring with the most desirable traits; and to ensure pathogen resistance and faster growth rates in fish aquaculture.

"The ubiquity of Dr. David Walt’s invention of microwell arrays exemplifies the spirit of the Russ Prize by improving the quality of life for people across the globe,” said Dr. Maj Mirmirani, interim dean of the Russ College of Engineering and Technology. “Fritz J. and Dolores H. Russ worked diligently to not only advance science and engineering for the greater good, but they also wanted to reward those who created profound impacts in their own field, just as Dr. Walt has advanced the field of genomics."

Ohio University endows the Russ Prize, which honors Fritz, a graduate of Ohio University, and his wife Dolores, for their dedication to education and the field of engineering.

“David’s development of microwell arrays embodies the purpose of the Russ Prize, which recognizes an outstanding bioengineering achievement in widespread use that improves the human condition,” Anderson noted. “Additionally, his achievement should help the public better understand and appreciate the contributions of engineers to our health, well-being and quality of life, while encouraging collaboration between the engineering and medical/biological professions to work closely together.”

David R. Walt is the Hansjörg Wyss Professor of Bioinspired Engineering at Harvard Medical School, professor of pathology at Brigham and Women’s Hospital and Harvard Medical School, Core Faculty Member of the Wyss Institute at Harvard University, associate member at the Broad Institute, a Howard Hughes Medical Institute Professor, and co-director of the Mass General Brigham Center for COVID Innovation. He is the scientific founder of Illumina Inc. and Quanterix Corp., and has cofounded multiple other life sciences startups including Ultivue, Inc., Arbor Biotechnologies, Sherlock Biosciences, Vizgen, Inc., and Torus Biosciences.

Learn more about the Russ Prize.