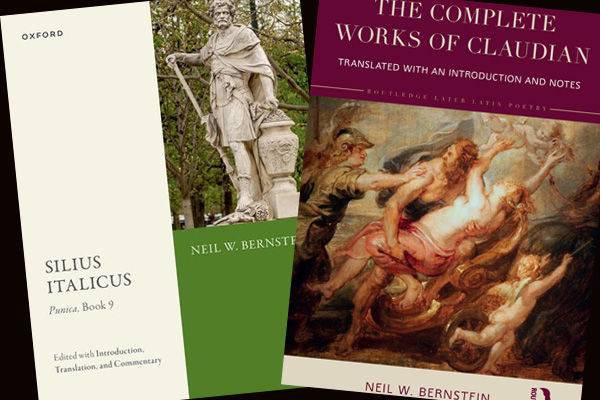 Published over the summer, "Silius Italicus: Punica, Book 9" is the first full-scale commentary in English devoted exclusively to the first-century Latin epic poem Punica 9, which begins the narrative of the Battle of Cannae in August 216 BC as told by poet Silius Italicus.

"This book is an integral part of the epic's three-book movement that narrates one of the largest battles in Roman history," said Bernstein, professor of classics and religious studies in the College of Arts and Sciences at Ohio University.

Bernstein's book pairs the Latin text with critical commentary and a parallel English translation. His commentary includes notes on literary style, use of language, poetic intertexts, and scholarly interpretation.

"When today's students study poetry that predates the Common Era, it's important to understand what life was like for the authors and characters. So in the introduction to the book, I provide the historical and historiographic context that helps readers learn more about Silius Italicus and his era, the historiographic and rhetorical traditions that he adopted, the inter- and intra-textuality of the Cannae episode, and the book's use of diction and meter," Bernstein said.

Due out in January, Bernstein's book "The Complete Works of Claudian: Translated with an Introduction and Notes" offers a modern and accessible translation of Claudian’s work, published in English for the first time since 1922.

Bernstein provides detailed notes and a comprehensive glossary of the writings of Claudian (active 395-404 CE), who was the last of the great classical Latin poets.

"Claudian's best-known work, 'The Rape of Proserpina,' continues to inspire numerous retellings and adaptations. Claudian also wrote poems in praise of rulers, including the emperor Honorius and the regent Flavius Stilicho, which are essential sources for reconstructing politics and society in the late Roman empire," Bernstein said.

"I provide an introduction with an overview of Claudian’s career, the wider historical and political context of the period, and the poetic traditions in which Claudian wrote, including mythological epic, panegyric, invective, and epithalamium," said Bernstein, whose volume provides new access to Claudian’s poetry for students and scholars working on late antique literature as well as those studying the history and culture of the western Roman Empire in this period.

"But this volume is also suitable for the general reader interested in the works of Claudian and this period more broadly," Bernstein noted.

His previous books on Latin poetry include "Silius Italicus: Rome’s War With Hannibal" (with Antony Augoustakis, 2021), and "Seneca: Hercules Furens" (2017).

Tags:
College of Arts and Sciences
Department of Classics and Religious Studies
Research